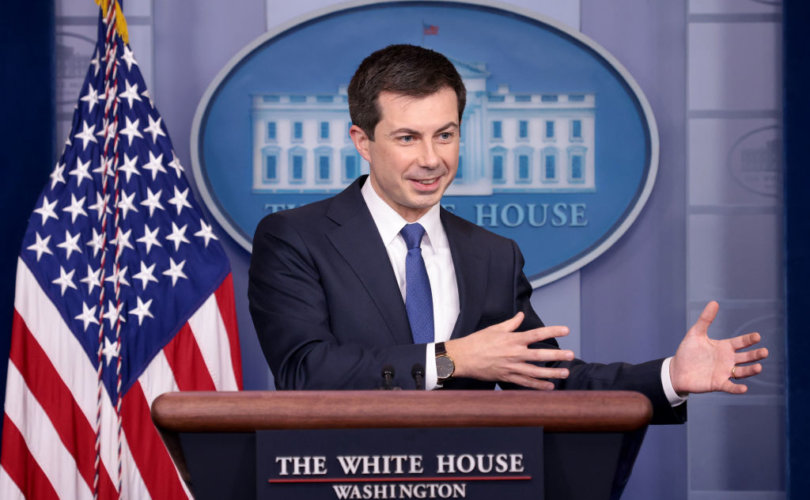 (LifeSiteNews) — The buzz around Washington in recent weeks is that President Joe Biden isn’t likely to run again in 2024 and will throw his support behind gay Transportation Secretary Pete Buttigieg instead of beleaguered Vice President Kamala Harris as his heir apparent.

Elite Democrats and pundits are swooning over the thought that they might be able to propel a gay man into the Oval Office.

“While Buttigieg says he’s not contemplating the race to be Biden’s successor, inside the West Wing, others are imagining it for him. His name is sometimes discussed by aides as a natural Democratic presidential nominee in 2028 — or 2024 if the president opts not to run,” wrote Politico’s Alex Thompson.

“Nobody in the West Wing shuts that down,” reported Thompson concerning the chatter among White House aides. “It’s very open.”

One of the reasons that so many are enthused about Buttigieg as Biden’s successor is his high net favorability rating. At +10, it eclipses not only every other member of the Biden cabinet, it also beats out President Biden and VP Harris, who come in at -6 and -12, respectively, according to a POLITICO/Morning Consult poll.

If Buttigieg does win the White House in 2024, he will be the first president to have met his “spouse” with the help of a homosexual dating app.

A campaign which will rely on mother-deprived children

“He’s the first openly gay cabinet Secretary to be Senate-confirmed and a new parent to two adopted kids who have become social media sensations, sometimes outpacing the president’s posts in terms of engagement,” gushed Politico’s Thompson.

Yet the harsh reality is that Pete Buttigieg’s campaign will be waged with the gay candidate standing on the shoulders of two mother-deprived toddlers.

There was never any doubt that Buttigieg and his homosexual “spouse,” Chasten Buttigieg, neé Glezman, would procure photogenic children because Americans like their presidents to be family men.

In September, many wondered what had happened in the moments leading up to the strange photo tweeted by Buttigieg showing him and “husband” Chasten each holding a newborn.

Most people would be aghast and rush to intervene if they witnessed a baby being torn away from his or her mother immediately after birth and handed over to two strange men whose stated mission is to purposefully deprive the child of a mother.

Whether procured via adoption or surrogacy, that is precisely what had happened.

The photo quickly garnered over 400,000 “likes,” and mainstream news media fawned over the contrived scene of two gay men sitting on a hospital bed holding newborns.

“Chasten and I are beyond thankful for all the kind wishes since first sharing the news that we’re becoming parents. We are delighted to welcome Penelope Rose and Joseph August Buttigieg to our family,” wrote the top Biden administration official.

Chasten and I are beyond thankful for all the kind wishes since first sharing the news that we’re becoming parents. We are delighted to welcome Penelope Rose and Joseph August Buttigieg to our family. pic.twitter.com/kS89gb11Ax

In Buttigieg’s strange worldview, an orphaned child’s right to both Mom and Dad “harms” gays, and the deep-seated hunger that every child has for parents of both sexes discriminates against gays.

In essence, he sees all kids as born prejudiced and deems active homosexuals as bigger victims than orphaned children.

He has made it clear that he believes a child’s need for both a mom and dad is an insult to gays and lesbians, therefore those children must sacrifice what is best for them in order to help homosexuals maximize their personal fulfillment.

This is what he will expect of the two infants he and Chasten are now raising. Those two kids will be told to be happy and smile for the cameras no matter how much they yearn for their missing mother(s).

While Buttigieg never fails to paint himself as a “moderate,” his natural instincts that surfaced during all his political events are those of a man whose same-sex attraction defines his personhood and distorts his view of reality.

Over the last few years, one fawning story after another has displayed mainstream media’s infatuation with the man, helping to create what Laura Ingraham once called a “carefully curated public image.”

He’s a Rhodes scholar who returned to the town where he grew up and was elected mayor before turning thirty years old. He left City Hall in 2014 when, as a Navy reservist, he was deployed to the Afghanistan War. He’s even an accomplished pianist.  He then tried to win the Democratic nomination for president in 2020 before eventually throwing his support behind Biden.

One commentator said of the heartland mayor, “He just seems so gosh-darned Midwest wholesome.”

Buttigieg is constantly portrayed as a moderate, yet if one looks closely at the portrait mainstream media has painted — the “aw shucks”-Midwestern-wholesomeness-meets-wise-Ivy-League-scholar image — one finds that it is heavily photoshopped.

Scrape off the layers of digital varnish that have been splashed on the man, and it becomes clear that Buttigieg espouses the same horrible ideals as his fellow Democrat contenders.

Buttigieg has indicated in the past: He wants to overhaul the United States Supreme Court because he believes it’s too conservative; He wants to get rid of the Electoral College — “It’s gotta go” — and establish automatic voter registration. He believes that climate change is a national security threat and supports Alexandria Ocasio-Cortez’s proposed Green New Deal. The young mayor would like to institute national single-payer health care — i.e., “Medicare for all” — and wants stricter gun control laws.

Unsurprisingly, Buttigieg’s deceased father was a Notre Dame University professor who, according to Paul Kengor, was “among a group of leftist professors who focused on injecting Marxism into the wider culture.”