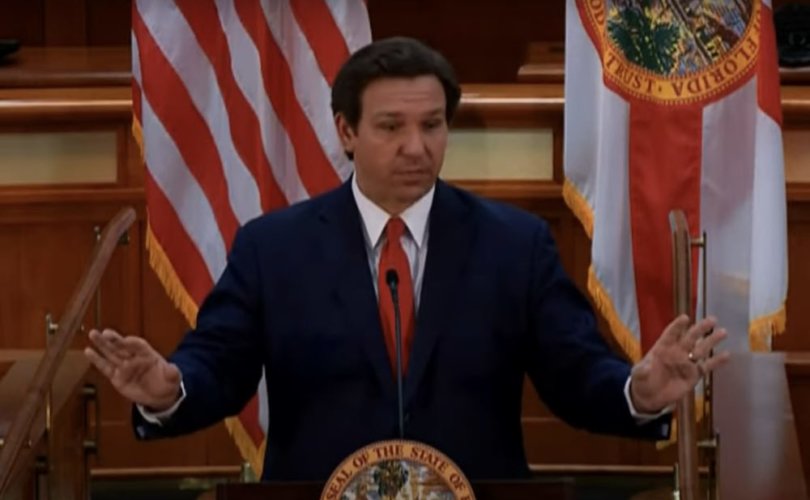 NOTE: This article represents the personal opinion of the author and does not constitute an official position or endorsement of LifeSiteNews, whose staff holds a range of views on prudential questions such as candidate preference, and is committed to objectively covering the strengths and weaknesses of all politicians.

(LifeSiteNews) – Former President Donald Trump is officially presidential candidate Donald Trump once again. But while his core of diehard fans is as delighted as ever, the mood has unmistakably shifted among the broader conservative movement, based on the steadily growing realization that there’s a promising alternative to the chaos that follows the 45th commander-in-chief everywhere he goes.

A comprehensive comparison between the records of Trump and Florida Gov. Ron DeSantis can be found here, which can be summarized fairly simply. Trump did reasonably well on policy tasks that his team could handle entirely within the executive branch, but consistently botched anything that required complicated wrangling with Congress or bringing rogue federal agencies to heel, while his public statements and who he chose to surround himself with routinely gave voters in the middle reasons to dislike him and enemies in the media openings to make him seem worse than he really was.

By contrast, DeSantis is a veritable conservative results machine, identifying one pressing issue after the next and implementing solutions to them, all sold to the public in a focused, digestible manner. In the process, he has driven the Left every bit as crazy as Trump did … without generating new problems or distractions for himself.

And so far, the political fortunes of both men have been exactly what one would expect from their respective performances. After only narrowly defeating the most hated political figure of a generation in 2016, Trump lost 2020 to quite possibly the most obviously awful presidential candidate in American history, a corrupt radical displaying clear signs of cognitive decline who campaigned from his basement.

(As for the inevitable “stolen election” rejoinders, losing due to fraud is still losing; elections can only be stolen if the true vote is narrow enough for fraud to close the gap. For an illustration of this, look no further than this year’s split outcomes in states like Arizona, where fraud has been alleged – and likely happened – yet the same electorates elected some statewide Republicans while rejecting others. There’s no way a crook trying to steal elections wouldn’t mark every race on the same phony ballot, meaning there must be other reasons why some candidates overcame it and others didn’t.)

DeSantis, meanwhile, went from getting elected by less than a percentage point in 2018 to getting reelected by 19.4% this year, growing a 30,000-vote margin of victory to a 1.5-million vote margin. MAGA apologists have tried to downplay this by citing everything from Florida’s freedom-loving Cuban population to the COVID-driven influx of voters who were already conservative.

Those factors helped, certainly, but the former was already a factor in past elections, and the latter was a direct result of DeSantis ensuring that Florida remained an appealing alternative to lockdown states. More important, none of them come close to explaining the sheer size or depth of the shift, which included making inroads among historically Democrat-supporting areas and ethnic groups.

More fundamentally, Florida was until relatively recently a swing state. It picked Trump for president twice but chose Barack Obama twice before that. Turning a purple state solid red – and doing it while working to make reality everything conservatives have spent years advocating – speaks to a rare political talent with immense potential for a nationwide campaign. A flurry of recent polls and surveys of both national respondents and battleground states indicates that Republican primary voters are increasingly coming to the same conclusion.

It is understandable how Donald Trump formed an emotional bond with so many people. And it’s tempting to want to see him get back at those who mistreated him. But the future of the country has to be bigger than such things. It has to be about who stands the best chance of not only convincing a majority of Americans but making the most of his time in the White House. And right now, nobody is making that case more powerfully than Ron DeSantis.