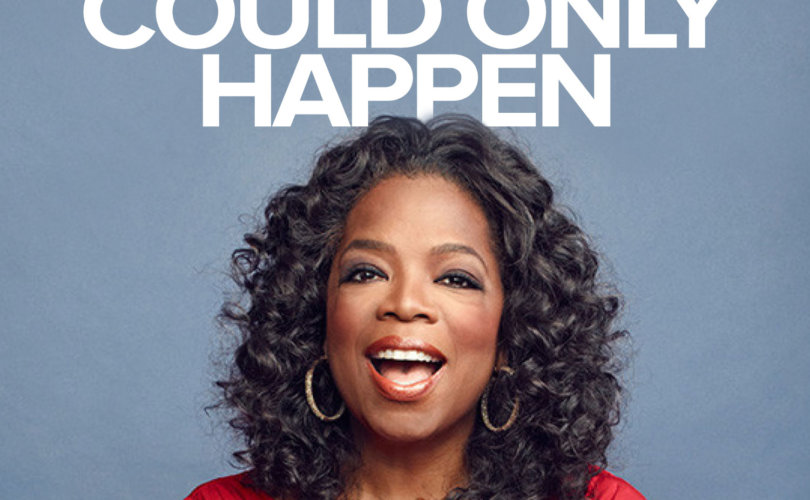 BEVERLY HILLS, Calif., January 10, 2018 (LifeSiteNews) – Liberals, looking for deliverance in the age of Trump, seem to have found their savior at the Golden Globe Awards on Sunday Night: media mogul and talk show host Oprah Winfrey.

The atmosphere in the Beverly Hills Hilton Hotel’s International Ballroom, filled to capacity with gowned and tuxedoed gliterati, was electric as Winfrey’s lifetime achievement award acceptance speech turned into what many interpreted as a political campaign speech.

The folks who live in Beverly Hills and Bel Air, Manhattan and the Hamptons effused breathlessly,  penning one endorsement after another. “Oprah/Michelle 2020,” tweeted comedian Sarah Silverman. Actor Leslie Odom Jr wrote: “She’s running. A new day is on the way.”

“More than an acceptance speech,” gushed Dennis Fallon at the Daily Beast, “Winfrey’s rousing Golden Globes speech played like a sermon or, optimistically, a presidential campaign speech.” He continued, “Oprah Winfrey, as she is wont to do, just gave the most galvanizing, inspiring, and possibly life-saving speech in awards show history.”

NBC added its approval, tweeting “Nothing but respect for OUR future president,” from its verified account during the telecast. The news media giant quickly regretted its premature partisan presidential endorsement, deleting the tweet Monday morning.

Liberal Elites have clearly let their 2020 Democratic Presidential candidate of choice be known.

RELATED: Phantom of the Oprah – Oprah's sham fight for abused women, especially as it applies to the Hollywood elites

Winfrey, after first talking about an “insatiable dedication to uncovering the absolute truth,” turned on a dime and exclaimed, “What I know for sure is that speaking your truth is the most powerful tool we all have,” [emphasis added].

Popular Conservative Ben Shapiro, tweeted, “There is no such thing as “your truth.” There is the truth and your opinion.”

Americans would be justified in questioning Tinseltown types’ ability to choose a president Americans want, especially during an era when Hollywood struggles to produce money-making movies that Americans want to see.

Ms. Winfrey is famous for jealously guarding her personal life from the public.  The American people only know about her what she wants them to know.

While serving as a talk show host, Winfrey has often imprudently endorsed products and health treatments based on what some identify as pseudoscience, sometimes careening into actual anti-science.  Many fall under the heading, “New Age.”

She has also catapulted men and women with dubious New Age-type ideas into stardom, sometimes resulting in tragedy. James Arthur Ray, who was a guest on Winfrey’s show more than once, was found guilty of negligent homicide after people who attended one of his “Spiritual Warrior” retreats died.  Eighteen others were injured.

NRO’s Devoe points out other New Age Winfrey endeavours, including hosting Brazilian healer, “John of God,” who performs disturbing “spiritual surgeries,” and promotion of  “the Thermage, a $30,000 machine that promised to smooth wrinkles using radio waves.”  Devoe compares Winfrey’s television New Age huckstering “to that of a snake-oil salesman in the Wild West.”

In the early 2000s, Winfrey started inviting representatives of new age spirituality onto her talk shows, including figures such as Marianne Williamson, Barbara DeAngelis, LaVar Burton, Richard Carlson, Betty Eadie, and many others. Winfrey strongly endorsed many of their works, and included some of them in her ‘Book Club” list.

Around that time, Winfrey, who identifies herself as a “Christian,” was named the “most dangerous woman in the world” by Bill Keller, considered then by some to be the world’s leading Internet evangelist.  He accused Oprah of peddling the equivalent of “spiritual crack.”

Years ago, Winfrey began embracing and publicly promoting the homosexual agenda, even referring to a pair of lesbians as “married” years before the Supreme Court ruled on the matter.  In doing so, she was using her mighty megaphone to normalize homosexuality and while nudging Americans toward acceptance of the notion of same-sex “marriage.”

Writers at The New York Times, musing about a possible Winfrey White House run, wondered if she “could navigate the ideological pitfalls of a presidential campaign and give voice not just to broad themes, but actual policy prescriptions.”

“While Ms. Winfrey has aligned herself generally with Democrats like Mr. Obama,” the NYTs report continued, “her views on a range of issues from financial regulation to drone warfare are opaque.”

“What do all saviors have in common?” was a question frequently asked by Jerry Harvey, former Professor of Management at DC’s George Washington University, now deceased, in his discussions with Masters candidates.  He answered, “They get crucified.”

Winfrey is too smart not to know this.

Over the course of her long and storied career, Winfrey has never experienced anything but fawning praise.  She avoids self-inflicted controversy and negative press coverage assiduously.  Maintaining the value of the “Oprah brand” depends on it.

Marketers have coined the term, the “Oprah Effect,” referring to the fact that whatever Winfrey promotes leads to mega sales. She has turned books, healthcare products, and personalities into huge successes.

Currently, she is not a political figure, and because of that, she enjoys broad appeal. But if she were to enter the political arena endorsing a liberal agenda, she would risk losing up to one-half of her adoring followers overnight.

Would Oprah––the Media brand––and more importantly––Oprah, the beloved personality––want to withstand buffets and punches, slings and arrows, from those who reject the far-left political ideology of the Democratic Party?  Probably not.

Hopefully, Winfrey is simply going to bask in the adulation of her Golden Globes performance while figuring out a way to monetize it.