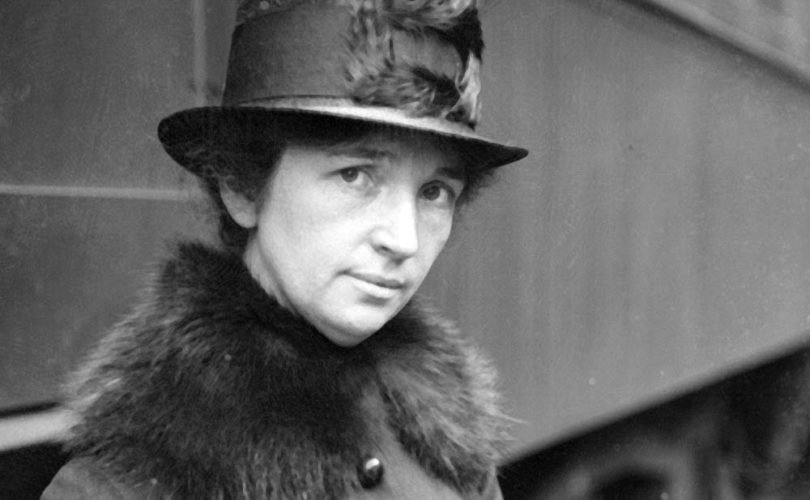 April 20, 2021 (LifeSiteNews) – On April 17, 2021, Alexis McGill Johnson had an op-ed in The New York Times. “I’m the Head of Planned Parenthood,” the title read. “We’re Done Making Excuses for Our Founder.” Fifty-five years after her death — and innumerable dead babies of color later — and the abortion giant has finally decided that it is time to cut ties with Margaret Sanger.

Johnson gets right to the point. As pro-lifers have been saying now for decades, Sanger was a racist and eugenicist, and for her, those two things were synonymous. Johnson admits as much, noting that Sanger attended a Ku Klux Klan rally in New Jersey and endorsed the 1927 Supreme Court decision to allow states to sterilize people they deemed “unfit” without their consent. Thousands of people were sterilized as a result. She also supported using 1,500 women in Puerto Rico as guinea pigs to test the birth control pill.

Johnson does manage to make a few excuses for Sanger by noting that they once would have said that she was a product of her time, although they wouldn’t do that now (see what she did there?) And she barely skims over Sanger’s views. In her book The Pivot of Civilization, for example, Sanger advocated for the elimination of “human weeds” and called for “the cessation of charity, for the segregation of morons, misfits, and maladjusted,” in addition to the sterilization of “genetically inferior races.”

Johnson also neglects to mention that Sanger was close friends with Lothrop Stoddard, the Klansman who wrote The Rising Tide of Color and was appointed by Sanger to the board of the Birth Control League. Stoddard was so beloved by the Nazis for his racial theories that he even met personally with Adolf Hitler. One of the reasons the Birth Control League eventually needed a name change — to Planned Parenthood, as it turned out — was that the BCL had too many overt Nazi connections for people to ignore.

Sanger would be thrilled with the ongoing destruction perpetrated by Planned Parenthood against minority populations. Indeed, alt-right figures such as Richard Spencer are fans of the abortion industry for precisely this reason. Planned Parenthood’s management may have undergone an ideological shift — convenient, since their corporate strategy has long been to hitch the abortion wagon to progressive causes as frequently as possible — but the effect of its bloody work is precisely the same. Sanger’s name may be taken off the front of Planned Parenthood clinics, but Sanger’s work is still going on inside.

The facts speak for themselves. As Alexandra De Sanctis pointed out in National Review: “Nearly 80 percent of Planned Parenthood’s clinics are located within walking distance of neighborhoods occupied predominantly by black and Hispanic residents. Despite constituting only 13 percent of the female population, black women represent more than one-third of all abortions in the U.S. each year. Black women are five times more likely than white women to obtain an abortion, and abortions are highly concentrated among low-income women. In recent years in New York City, more black babies were aborted than were born alive.”

The slogans may have changed, but the work Planned Parenthood is something from Lothrop Stoddard’s wildest dreams. The abortion giant is making millions killing black and Hispanic babies in the womb, and they are now attempting to hoist the banner of racial justice over this pile of corpses while scoring points for repudiating a dead woman’s racism. Like many other major corporations, they’re simply attempting to virtue-signal their way to a free pass while continuing the ugly exploitation they practice as a matter of course. Meanwhile, they’re getting away with murder.

Benjamin Watson, a former NFL player and host of the recent pro-life documentary Divided Hearts of America, responded on his Facebook page:

This is well and good but it is time for Planned Parenthood to take the next step, or their denunciation of Margaret Sanger rings hollow. Whether they personally identify with Sanger’s ideology or not, they continue to carry out her mission, by serving as the leading executioner of our children. The same Sanger they claim to disavow would applaud their efforts and results, as a disproportionate percentage of Black American children have been killed in Planned Parenthood’s abortion clinics.

Acknowledging a racist history does not absolve them of the blood on their hands, as they continue to take full advantage of victims of the real and present racism they decry.

Quite frankly, how much of a racist or eugenicist Sanger was or wasn’t is of no real consequence right now as children die daily. The issue is that the profitability of abortion makes it a difficult cash cow to forgo. I urge Planned Parenthood to continue this “reckoning”, not simply by calling out racism and combating white supremacy, but by using their wealth to meet the needs of mothers and their influence to halt, not perpetuate, the ultimate goal of a eugenic agenda, extermination of an undesirable’s offspring.

That, of course, Planned Parenthood will never do. They prefer to decry the exploitation of minority communities while killing their children at a profit.