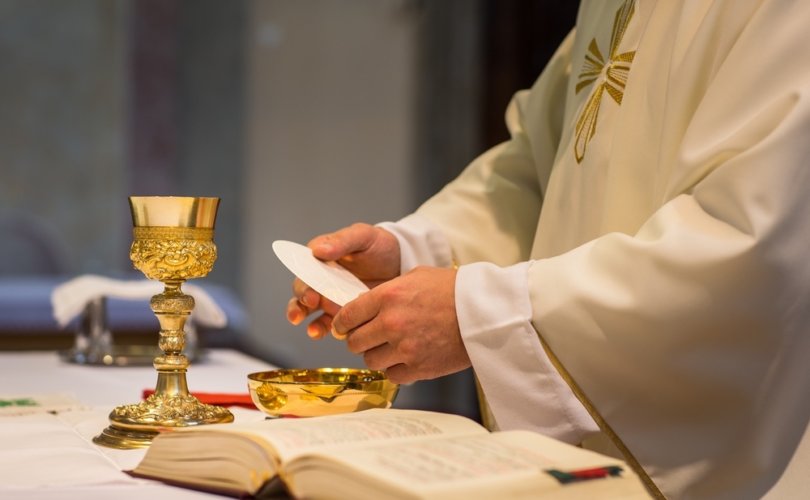 November 9, 2018 (LifeSiteNews) – A prelate, a canon lawyer, and a theologian say sexually abusive priests should be excommunicated. A look into the new 1983 Code of Canon Law shows that the Church, with that code's promulgation, introduced a laxer way of dealing with priestly child molesters and priests who are practicing homosexuals. This lenient change had grave consequences.

Archbishop Buti Tlhagale, OMI of Johannesburg, South Africa says Church law should be changed to automatically excommunicate priests who commit sexual abuse. The U.S. Catholic theologian Scott Hahn recently made a similar statement. An internationally renowned German canon law professor, Peter Landau, even formulated a terse and strict sentence that could be added to the Code of Canon Law.

Peter Landau – a professor of canon law who has also taught at Princeton and the University of Chicago – recently proposed the following sentence be inserted into the current Code of Canon Law: “A person who hurts a minor by a sexual crime incurs an automatic excommunication.”

In another follow-up email, Professor Landau further explains: “The [new] norm prescribes only generally the imposition of just penalties and, in grave cases, the dismissal from the clerical state.” However, “the specific penal provision of can. 2359 § 2 CIC 1917 has been canceled in 1983.”

§ 2 If an offense against the sixth commandment with minors under sixteen years of age be admitted, or if adultery, rape, bestiality, sodomy, pimping or incest with first degree relations be carried out, they are to be suspended, declared infamous and deprived of every office, benefit, dignity and function that they might have and in the more serious cases, deposed.

§ 3. If they have committed an offense against the sixth commandment in some other way, they are to be coerced with appropriate penalties according to the gravity of the case, not excluding deprivation of office or benefit, especially if they have care of souls.

As this legal text shows, the following clear set of penalties were set forth for child molesters and homosexually active priests: “They are to be suspended, declared infamous and deprived of every office, benefit, dignity and function that they might have and in the more serious cases, deposed.”

Let us now consider the new rules as set out in 1983 CIC. Following Professor Landau's lead, we have to look at can. 1395:

§2. A cleric who in another way has committed an offense against the sixth commandment of the Decalogue, if the delict was committed by force or threats or publicly or with a minor below the age of sixteen years, is to be punished with just penalties, not excluding dismissal from the clerical state if the case so warrants.

Notice here that the abuse of a minor is not anymore placed at the top of the paragraph, but toward the end. But even more importantly, the penalties are vaguer, when the canon states that the offender “is to be punished with just penalties, not excluding dismissal from the clerical state if the case so warrants.”

As an expert in canon law who spoke with LifeSiteNews on the condition of anonymity comments, this new regulation left it in the hands of the bishops to determine the penalties, and subsequently bishops often chose to rely on the assessment of, and treatment by, a psychiatrist rather than imposing swift and clear penalties.

As the German canon lawyer Professor Manfred Baldus explains with regard to sex abuse, in the older Church law “there even existed the possibility of sending an offender, if not into prison, but at least permanently to a disciplinary institution [‘Demeritenanstalt’] for errant priests which stands under the supervision of the bishop.”

Another important aspect in this older canon is that it explicitly categorizes acts of sodomy and adultery committed by a cleric as delicts against the Sixth Commandment, something that has now been altogether deleted from the 1983 CIC. This deletion thus makes it much harder for a bishop to impose penalties upon a sexually active priest. The 1917 code as quoted above mentions as offenses, in addition to the abuse of a minor, also “adultery, rape, bestiality, sodomy, pimping or incest with first degree relations.”

According to LifeSiteNews’ expert source, under the new canon, without this explicit reference to homosexual acts, a bishop, in order to punish a homosexually active priest, would have to rely on another canon, canon 1399 of the Code of 1983. That canon requires much more difficult conditions to prove, namely “grave scandal” that the depraved acts of such a priest entails.

Another well-known canon law expert, Edward Peters, commented recently on this problem of the change of this canon, saying: “It was only with the dilution that Canon 2359 suffered when it re-appeared as Canon 1395 of the 1983 Code that the express and long-standing criminalization of homosexual acts by clergy was blurred or lost.”

Therefore, results of this laxening of the canon law with regard to sexual offenders among priests are clearer for us to see before our very eyes.