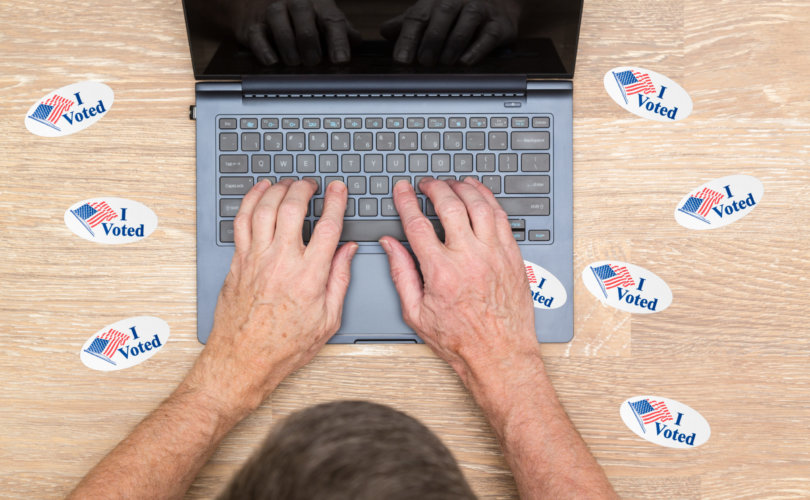 WASHINGTON, D.C., November 4, 2020 (LifeSiteNews) – Is the nation witnessing a massive campaign to commit fraud against an incumbent president, powered by dishonest mainstream media, “Big Tech” firms that control the flow of information on the internet, and the Democratic Party, which uses its political power to undermine election integrity by creating voting rules that allow ample leeway for vote tampering?

There is alleged evidence of a conspiracy to steal the election from Donald Trump.

“Last night I was leading, often solidly, in many key States, in almost all instances Democrat run & controlled,” noted President Trump in a tweet early this morning.

“Then, one by one, they started to magically disappear as surprise ballot dumps were counted,” said the president.

But the overnight appearance of pro-Biden ballots is just the tip of the iceberg. Beneath the surface lies the collusion between America’s three giant forces continually nudging the country toward Barack Obama’s promised “fundamental transformation” toward globalism, socialism, and ultimately, Marxism.

The assault isn’t just against the President: It’s against those who have been lied to in order to hurt his presidency and those who have now seen their votes – cast in good faith – essentially rendered meaningless.

That theme has been repeated many times today.

“Let the weight of that statement hit you like a freight train because it’s 100% true,” he added.

If Biden takes this, the media and big tech just decided an election. Let the weight of that statement hit you like a freight train because it’s 100% true.

“Is it just me or (is) this all playing out exactly like Big Tech and Fake News said it would play out?!” he asked.

“It’s almost like we’re watching an evil plan to steal America being put in motion.”

Is it just me or this all playing out exactly like Big Tech and Fake News said it would play out?!

“Dems wanted this election chaos,” continued O’Handley in a subsequent tweet. “They specifically engineered it to happen. This is their new Russia Collusion.”

They specifically engineered it to happen

This is their new Russia Collusion

They will fail, again

Rather than back off, Twitter has doubled down in the aftermath of the election:

“Tech overlords are taking it to another level,” The Daily Wire pointed out. “Can’t even ‘like’ Matt Walsh Blog’s tweet.”

Despite their combined heft, mainstream media, social media, and internet search engine giants failed to produce wins for their presidential candidate, Joe Biden, in swing states.   Democrat-controlled jurisdictions were forced to engage in questionable practices to drag Biden across the finish line.

“Election boards and state Democratic officials and local officials have decided they’re just going to ignore the law,” said Washington attorney Cleta Mitchell in a Newsmax interview regarding the intent of some states to count ballots received after Election Day.

“Is anyone really surprised that we have uncertainty and chaos in states where courts have given in to Democrat demands to change the rules at the last minute?” asked Pete Hutchinson, president of Landmark Legal Foundation, in an interview.

“The answer is no, and that’s exactly what we’ve had in Pennsylvania, in Wisconsin, in Michigan, attempts in Georgia,” continued Hutchinson. “Early on, changes were made contrary to state law in Nevada.”