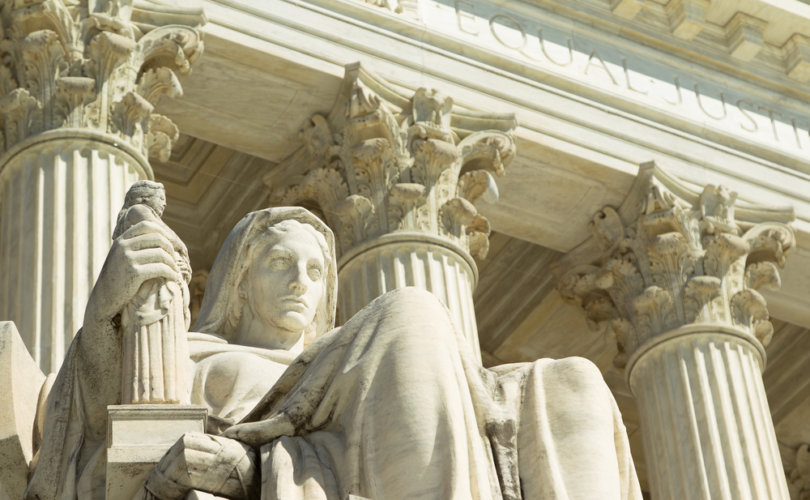 June 27, 2018 (LifeSiteNews) – ​How should we evaluate the Supreme Court’s decision to send back Barronelle Stutzman’s case to the Washington Supreme Court? Did they merely punt the case farther down the field? Or is this another victory for religious rights, much like the victory won by Jack Phillips and Masterpiece Cakes last month?

The Supreme Court could have agreed to hear Stutzman’s case, but it chose not to at this point. It could also have refused to hear the case entirely, which would have been a devastating defeat for this Christian grandmother. Thankfully, that did not happen.

But what the court did decide is significant. The court sent the case back to Washington, advising the justices there to reconsider their initial decision, which found Stutzman in violation of the state’s anti-discrimination laws, in light of the Supreme Court’s own decision in Masterpiece Cakes.

Is this, then, a victory for Stutzman, not to mention for religious freedoms in general? (Remember: She did not refuse to serve a gay couple. To the contrary, she had served these same gay clients for at least 9 years. She simply declined to create the floral arrangement for this couple’s “wedding,” based on her religious beliefs.)

The article begins with, “When it comes to creating products for same-sex weddings, the Supreme Court reasoned Monday that what's good for the baker is good for the florist.”

This would appear to be a victory for Stutzman.

The Advocate, a flagship LGBT publication, doesn’t think so: “The U.S. Supreme Court has sent the case of a florist who refused to serve a same-sex couple’s wedding back to the state court for review — but did not say the state ruled wrongly in finding the florist committed unlawful discrimination, leading LGBT advocates to say it’s likely the state will again rule that the florist committed unlawful discrimination.”

This opinion is seconded by James Esseks, director of ACLU’s LGBT and HIV Project. As stated in an ACLU press release, “We are confident that the Washington State Supreme Court will rule once again in favor of the same-sex couple, and reaffirm its decision that no business has a right to discriminate. Our work to ensure LGBT equality is the law and the norm in all 50 states will continue.”

But if this is true, why would the court bother to send the case back to Washington? If the Supreme Court justices believed that the Washington justices adjudicated the case fairly, why ask them to reexamine the case based on the Masterpiece Cakes decision?

I believe it was for good reason that the ADF, which represents both Philips and Stutzman, declared in an email announcement, “This is big news! The Washington Supreme Court had previously ruled that the government can force Barronelle to create artistic expression and participate in events that conflict with her faith.”

But now, to quote the ADF’s email, the Supreme Court’s order did three things:

The real issue, then, is the Washington decision. The justices ruled unanimously against Stutzman, 9-0, so they clearly decided that the matter was not debatable.

In the words of Justice Sheryl Gordon McCloud, “this case is no more about the access to flowers than civil rights cases were about access to sandwiches. As every other court to address the question has concluded, public accommodations laws do not simply guarantee access to goods or services. Instead, they serve a broader societal purpose: eradicating barriers to the equal treatment of all citizens in the commercial marketplace.”

The court also rejected the argument that Stutzman’s “floral arrangements were a form of artistic expression and so protected by the First Amendment.”

At the same time, the Washington Supreme Court recognized that, “It is uncontested that her sincerely held religious beliefs include a belief that marriage can exist only between one man and one woman.”

How, then, can the court force her to violate her “sincerely held religious beliefs” to perform an act of artistic service for a gay couple?

It may be true that the Washington justices did not display the same level of animosity against religion as did the Colorado officials who ruled against Jack Philips. Yet it would be hard to deny that, in the eyes of these Washington justices, religious rights take a distant back seat to LGBT rights.

Can we expect them to change their ruling in light of the Supreme Court’s order? It would be foolish to get too optimistic, given their previous 9-0 decision. Yet it’s clear that the case was returned to them for a reason. And should they rule the same way again, the case will surely be appealed back to the Supreme Court.

Perhaps, if that scenario unfolds, the court will issue a more definitive defense of First Amendment rights.

But let’s pray even now for justice to prevail. The State of Washington has literally sought to bankrupt this Christian grandmother. Specifically, “Washington State Attorney General Bob Ferguson and the American Civil Liberties Union (ACLU) of Washington . . .  filed discrimination lawsuits” against Stutzman. “In addition to targeting her business, Arlene’s Flowers, Inc., they sued Stutzman personally, ensuring that any assets she might own beyond the flower shop could be taken from her to pay their own legal fees if she lost.”

Are you going to tell me there is no animus against religion in these outrageous actions? It’s high time these hostile sentiments get exposed.