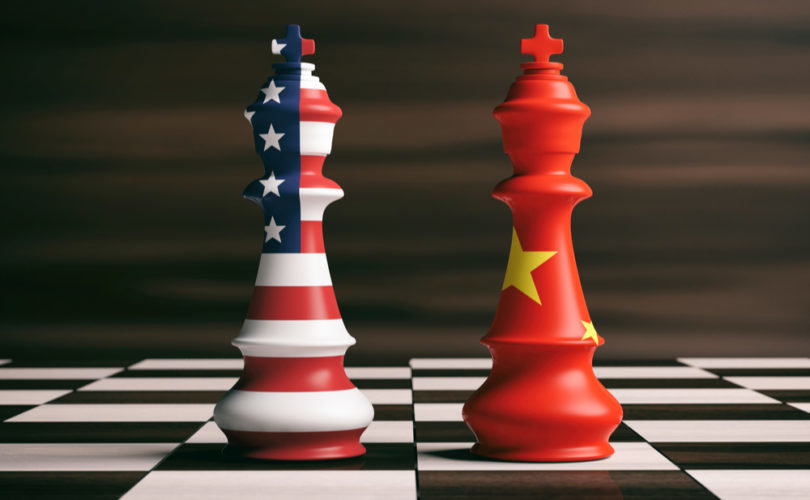 China vs. the United StatesShutterstock

March 19, 2021 (LifeSiteNews) — China’s “wolf warrior” diplomacy was on full display at the Alaska summit. The fireworks began when country’s top diplomat, Yang Jieqi, launched into a 16-minute diatribe against the United States.

Both sides had agreed to limit their opening statements to 2 minutes each. But, as everyone knows, China doesn’t play by the rules. It simply flouted this one.

Rejecting criticism of China’s ongoing cyberwarfare against the U.S., Yang accused the U.S. of being the “champion” of cyberattacks. On the human rights front, he claimed that the U.S. does not represent “global public opinion” and that it has “deeply-rooted human rights problems,” including its “history of killing Black people.”

The final insult came when Yang said, “So, let me state here, in front of the Chinese side, the United States doesn’t qualify to lecture China from a position of strength.”

The entire diatribe seems to have caught Team Biden off guard. It shouldn’t have, since for the past several years, Beijing’s diplomats have been viciously attacking anyone who criticizes mighty China.

Because Australia has called for an independent investigation of the China Virus’s origins, Chinese officials have compared Australians to “gum stuck to the bottom of your shoe that you need to scrape off every once in a while.”

No diplomatic niceties there.

When China’s “wolf warrior” diplomats sense weakness, they now go on the attack. Team Biden should have anticipated this — but they didn’t. Either they didn’t plan out the meeting in advance — with draft statements, etc. — or they got totally played by the Chinese side.

It was painful to watch.

Secretary of State Tony Blinken was apparently unaware that the old Obama-Biden rules from 5 or 10 years ago don’t apply anymore. The rules where we pretend to slap China on the wrist for, say, human rights abuses, after which China pretends that it intends to do better.

The new China tactic is to use the rhetoric of our own Leftists against us, in the hope of robbing us of the moral high ground and embarrassing our negotiators into silence.

So we heard Yang claim that America has no moral authority to lecture China on human rights given that the U.S. itself suffers from structural racism that systematically oppresses blacks and other minorities.

See how China is using the American Left’s lies against us?

And it seems to have worked, since Blinken simply sat there and took it while the U.S. was attacked.

When Blinken finally had a chance to respond, all he could do was to acknowledge America’s imperfections.

“We make mistakes,” he said. “We, we have reversals, we take steps back. But what we’ve done throughout our history is to confront those challenges — openly, publicly, transparently — not trying to ignore them, not trying to pretend they don’t exist. Sometimes it’s painful. Sometimes it’s ugly. But each and every time we’ve come out stronger, better, more united, as a country.”

He was, in short, reduced to playing defense.

The Alaska meeting was supposed to pave the way for an April summit between President Biden and Chinese leader Xi Jinping. Given our weak showing in Alaska, the way we got humiliated on our own soil, there is no way we should agree to such a meeting.

Why embarrass the United States even more?