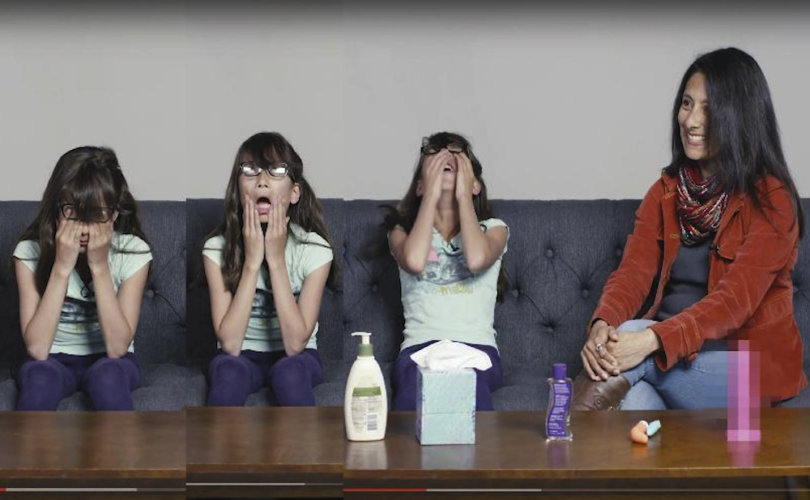 The video has gone viral since being posted last week and is closing in on 1.4 million views.

The suffering of the kids is visible, palpable

Throughout the video, the kids cringe. The body language is difficult to watch. They shake their heads, they cover their eyes, they hold their heads in their hands; they turn their heads and look away from their parents, holding up their hands as if to say “stop talking; please, stop talking.”

Rather than expressing concern for the discomfort their kids are experiencing, the parents mostly laugh with glee as their kids squirm, and then look off in the distance at the other adults standing behind the camera for approval.

As soon as the offensive object is out of her hands, the girl pulls back her hands away from her mom, shaking them, as if to cleanse them.

What does this mom do? She laughs.

Throughout the video the children moan “oh no, no,” and “No, noooo, nooooooo.”

Then the kids are coached to ask their parent(s) if they have ever masturbated. The kids squirm and stumble over the words. One poor little girl has to try a few times before she is able to get the words out. Her lips are tightly pursed, and she manages a nervous smile of humiliation, “Mom, do you … mastur … mastur … bate?”

Then she covers her mouth in horror over what she just said to her mom. Perhaps she was about to throw up. During the entire ordeal, she is unable to look her mother in the eye.

Two other little girls, sisters no doubt, clearly don’t want to ask their mom the question as each defers to the other:

Because of the editing of the video, we have no idea if the questioned got asked, but mom was happy to answer.

Three weeks ago, LifeSiteNews posted a story about a shocking video showing a little girl waving a rainbow flag in front of a nearly nude male dancer during a “gay pride” celebration.

The video was too offensive, so the “dancer” was blurred out. But it was important in order to draw attention to the super-sexualization of children through exposure to “Gay Pride” events, which often display full or partial nudity and provocative simulated sex or dance.

YouTube quickly removed the video and issued a warning to LifeSiteNews, saying “YouTube isn’t the place for nudity or sexually provocative content. Sexual content involving minors is particularly sensitive. YouTube prohibits uploading, commenting, or engaging in any type of activity that sexualizes minors. … We’ve removed it from YouTube and assigned a Community Guidelines strike, or temporary penalty, to your account.”

YouTube’s removal of the video is stunning precisely because the media giant expressed agreement with LifeSiteNews and its many readers, who see much of the behavior at “Gay Pride” events as harmful for kids.