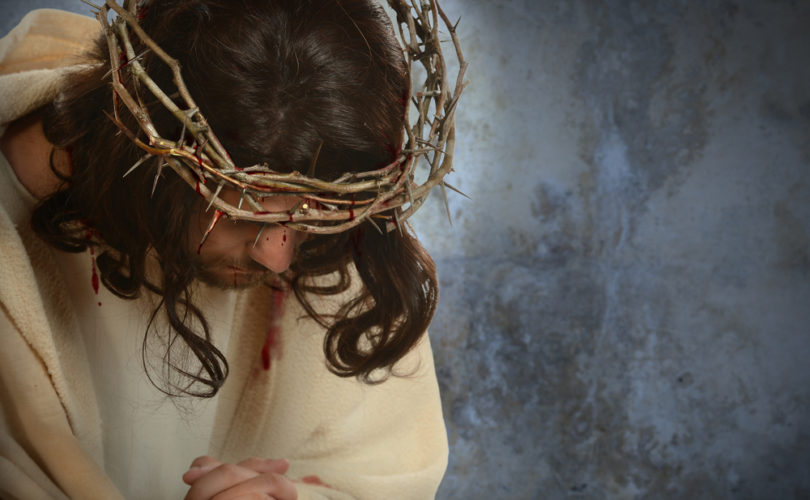 September 24, 2015 (LifeSiteNews) — The most common criticism that LifeSite and many of the more effective pro-life, pro-family leaders endure is that we are “divisive”, that we “judge” and that Jesus would not say what we say or that Jesus is more loving and accepting of all people, etc.

These criticisms are made in response to uncomfortable, accurate revelations about the actions of others – even though the revelations have a positive, loved-based purpose, as a father would have for his children or a brother for his siblings or a man or woman for their nation.

The Jesus that the critics, among both clergy and the public, and especially from those who promote acceptance of unnatural sexual behavior, refer to, is a fictional, sentimental Jesus.

The real, scriptural Jesus was in fact very divisive. He was divisive in that he revealed the hidden or not so hidden thoughts and actions of those who rejected, and were divided from the will of God.

The division they accused Jesus and all the apostles and saints of was of the critics’ own making – not Jesus’s. They could not stand what he revealed or rebuked them for. They refused to repent and accept the direction and love of Jesus. They crucified him for this as they also crucified many saints through the ages.

Similarly, what LifeSite frequently exposes is division that already exists (we do not create it) and which others are determined must be kept hidden or wrongly justified. They do not want the truth that could harm their worldly status, wealth, power over others, their harmful plans and manipulations or their wrong way of life or their sins to be revealed.  And yet, that is exactly what Jesus did, but as actions of love, teaching and just judgment.

Most people have some familiarity with many of the uplifting and most commonly stated love and acceptance sayings of Jesus, such as “love one another as I have loved you.” After all, Jesus is love. God is love.

But, true love is always far more than beautiful sayings and warm feelings. The greatest love challenges and makes hard decisons. The ultimate love is to give one’s life for another, even when that other spits on, abuses and crucifies the one who loves.

Below are just some of the sayings of Jesus, the hard sayings that many prefer to deny Jesus ever said. However, the real Jesus cannot possibly be known without acceptance of these sayings as well. These are also essential to the roadmap to eternal life and, which many do not or do not want to comprehend.

They are also as much of the love teachings of Jesus as are are all the other sayings. They are integral to Jesus's great commandments of “love one another as I have loved you” and “love God with your whole mind and heart and soul”.

Some of the Hard Sayings of Jesus Christ

4:17 From that time Jesus began to preach, saying, “Repent, for the kingdom of heaven is at hand.”

7:15-27 “Beware of false prophets, who come to you in sheep's clothing but inwardly are ravenous wolves. You will know them by their fruits. Are grapes gathered from thorns, or figs from thistles? So, every sound tree bears good fruit, but the bad tree bears evil fruit.

8:11-12 “I tell you, many will come from east and west and sit at table with Abraham, Isaac, and Jacob in the kingdom of heaven, while the sons of the kingdom will be thrown into the outer darkness; there men will weep and gnash their teeth.”

10:14-16 “And if any one will not receive you or listen to your words, shake off the dust from your feet as you leave that house or town. Truly, I say to you, it shall be more tolerable on the Day of Judgment for the land of Sodom and Gomorrah than for that town. Behold, I send you out as sheep in the midst of wolves; so be wise as serpents and innocent as doves.”

10:21-22 “Brother will deliver up brother to death, and the father his child, and children will rise against parents and have them put to death; and you will be hated by all for my name's sake.”

13:40-42 “Just as the weeds are gathered and burned with fire, so will it be at the close of the age. The Son of man will send his angels, and they will gather out of his kingdom all causes of sin and all evildoers, and throw them into the furnace of fire; there men will weep and gnash their teeth.”

13:49-50, 57 “So it will be at the close of the age. The angels will come out and separate the evil from the righteous, and throw them into the furnace of fire; there men will weep and gnash their teeth.” … And they took offense at him.

14:3-4 “For Herod had seized John and bound him and put him in prison, for the sake of Herodias, his brother Philip's wife; because John said to him, “It is not lawful for you to have her.”

15:18-20 “But what comes out of the mouth proceeds from the heart, and this defiles a man. For out of the heart come evil thoughts, murder, adultery, fornication, theft, false witness, slander. These are what defile a man…”

16:3-4 “You know how to interpret the appearance of the sky, but you cannot interpret the signs of the times. An evil and adulterous generation seeks for a sign, but no sign shall be given to it except the sign of Jonah.” So he left them and departed.

16:23 Jesus turned and said to Peter, “Get behind me, Satan! You are a stumbling block to me; you do not have in mind the concerns of God, but merely human concerns.”

19:8-9 “For your hardness of heart Moses allowed you to divorce your wives, but from the beginning it was not so. And I say to you: whoever divorces his wife, except for unchastity, and marries another, commits adultery.”

Matthew 23:33 “You snakes! You brood of vipers! How will you escape being condemned to hell?”

3:28-29 “Truly, I say to you, all sins will be forgiven the sons of men, and whatever blasphemies they utter; but whoever blasphemes against the Holy Spirit never has forgiveness, but is guilty of an eternal sin” — for they had said, “He has an unclean spirit.”

8:33, 38 But turning and seeing his disciples, he rebuked Peter, and said, “Get behind me, Satan! For you are not on the side of God, but of men. … For whoever is ashamed of me and of my words in this adulterous and sinful generation, of him will the Son of man also be ashamed, when he comes in the glory of his Father with the holy angels.”

9:41 Jesus answered, “O faithless and perverse generation, how long am I to be with you and bear with you?”

16:13-16 “No servant can serve two masters; for either he will hate the one and love the other, or he will be devoted to the one and despise the other. You cannot serve God and mammon.” The Pharisees, who were lovers of money, heard all this, and they scoffed at him. But he said to them, “You are those who justify yourselves before men, but God knows your hearts; for what is exalted among men is an abomination in the sight of God.”

21:16-17 “You will be delivered up even by parents and brothers and kinsmen and friends, and some of you they will put to death; you will be hated by all for my name's sake.”

3:18-20 “He who believes in him is not condemned; he who does not believe is condemned already, because he has not believed in the name of the only Son of God. And this is the judgment, that the light has come into the world, and men loved darkness rather than light, because their deeds were evil. For every one who does evil hates the light, and does not come to the light, lest his deeds should be exposed.”

7:7 “The world cannot hate you, but it hates me because I testify of it that its works are evil.”

7:43-44 So there was a division among the people over him. Some of them wanted to arrest him…

John 8:44 You belong to your father, the devil, and you want to carry out your father's desires. He was a murderer from the beginning, not holding to the truth, for there is no truth in him. When he lies, he speaks his native language, for he is a liar and the father of lies.

15:6 “If a man does not abide in me, he is cast forth as a branch and withers; and the branches are gathered, thrown into the fire and burned.”

15:18-25 “If the world hates you, know that it has hated me before it hated you. If you were of the world, the world would love its own; but because you are not of the world, but I chose you out of the world, therefore the world hates you. Remember the word that I said to you, `A servant is not greater than his master.' If they persecuted me, they will persecute you; if they kept my word, they will keep yours also. But all this they will do to you on my account, because they do not know him who sent me. If I had not come and spoken to them, they would not have sin; but now they have no excuse for their sin. He who hates me hates my Father also. If I had not done among them the works which no one else did, they would not have sin; but now they have seen and hated both me and my Father. It is to fulfill the word that is written in their law, `They hated me without a cause.'”