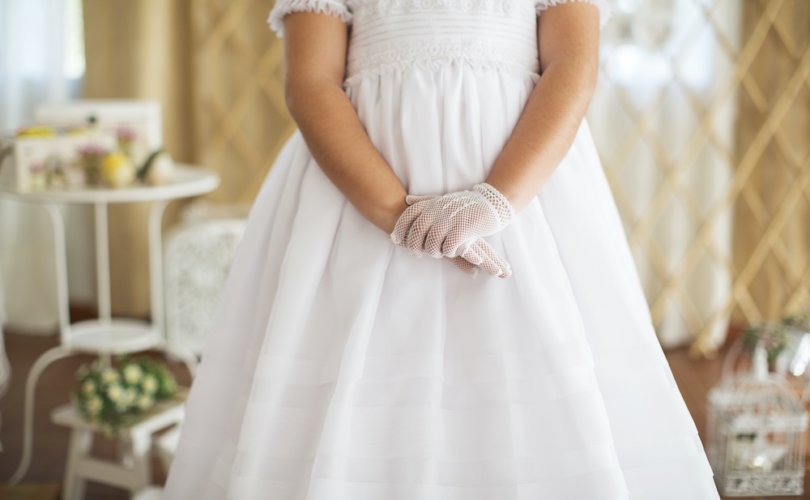 At first I couldn’t understand the headline. How can you receive Holy Communion via a video link? Did RTE mean that the children made a Spiritual Communion?

But no. It turns out that, since the children had been due to make their First Holy Communion, their parish priest decided to allow them to do this at home. “Fr George consecrated the hosts at an earlier mass today and then families were given different time slots to collect them.”

They received Holy Communion in the course of watching a live-streamed Mass. The priest commented:

The parents of ten pupils took up the offer of a virtual Communion. It gave me a real sense of what the early Catholic church must have been like, when people gathered for mass in each other’s homes.

Except, of course, that it has nothing to do with having Mass in a private home. Mass took place in church, without the people. The only thing that happened in their homes was the reception of Holy Communion.

However, the Blessed Sacrament should not be entrusted to the care of the laity even for a short time without serious reason. As the Code of Canon Law expresses it (Can.  935):

No one is permitted to keep the Eucharist on one’s person or to carry it around, unless pastoral necessity urges it and the prescripts of the diocesan bishop are observed.

The importance of this rule has been obscured by the practice of getting lay people to take the Blessed Sacrament to the sick and housebound. This has created all sorts of opportunities for irreverence and, of course, it deprives the sick of the chance that the visit of a priest would give them for Confession, spiritual direction, and where appropriate the Sacrament of the Sick. I am reminded of the story of the Catholic convert Malcolm Muggeridge, who, when seriously ill, was visited by a lay “Extraordinary Minister of Holy Communion,” who proceeded to retrieve the pyx, containing the Blessed Sacrament, out of the pocket of her jeans. He was so appalled he threw her out of the house.

Having said that, it must be admitted, first, that genuine necessity may demand that the laity perform this function, and, second, that the system is supposed to ensure that they are properly prepared, and do carry it out with due decorum. This case, however, clearly doesn’t count as pastoral necessity, and nor, as far as it is possible to see, have proper procedures been followed.

It is sad that those looking forward to their First Holy Communion are obliged to wait longer than planned to do so, but they are in this respect in the same boat as millions of other lay Catholics deprived of the Sacraments. It is hard to imagine what possible justification there could be for breaking the usual rules, designed to protect the Blessed Sacrament from profanation and to accord it proper honor, simply in order to have a private First Holy Communion a few weeks sooner than would otherwise be possible.

Something we have heard very little about, by contrast, is the baptizing of infants. This is a very different situation, in which there is a genuine pastoral necessity, and lay people can carry out a baptism without infringing any liturgical rules: as I have discussed here before, if anything “private baptisms” have been discouraged, for example by Cardinal Cupich. When I wrote that article I was thinking about the situation of infants whose christening had already been planned and had had to be indefinitely postponed. Given that the Church urges us to baptize our children swiftly after birth, waiting for another two or three months is clearly unacceptable.

Since then, however, I have had to take my own advice on private baptism, for my daughter was born when the lockdown was already well in place. Clearly it was not going to be possible for a priest to baptize her within a month of her birth. We look forward, now, to a public service of the “Supply of Ceremonies,” which can wait for churches to be reopened.

Why has there been so much concern about Holy Communion, which is still available for the dying and is otherwise never a matter of grave urgency, and so little about Baptism, a “sacrament of the dead” which raises the candidate to spiritual life? It seems that public debate on the Church under lockdown has not been informed by a proper sense of priorities.