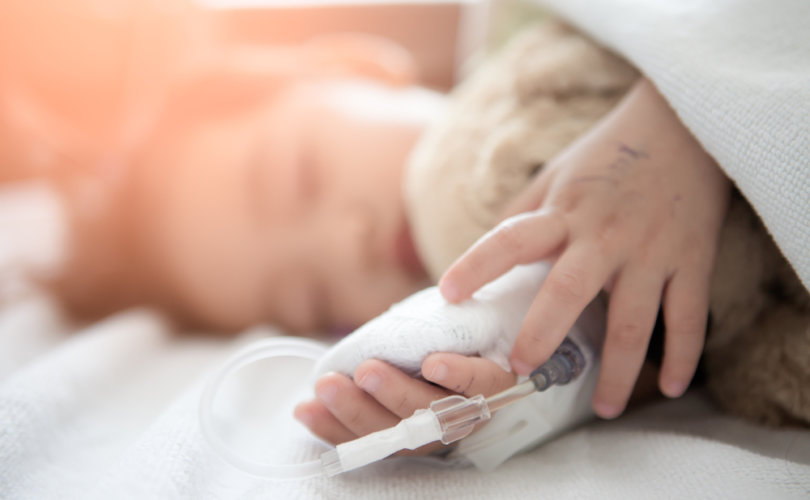 September 24, 2018 (LifeSiteNews) – Only two years out from the legalization of assisted suicide in Canada, the Liberal government is already searching for ways to expand access to these so-called “services,” and to do so have asked the Council of Canadian Academies to create a report detailing a way forward. Three key issues are being considered, including euthanasia for those suffering with mental illness, those who wish to produce an “advanced directive” asking a medical professional to kill them after they have potentially lost the mental capacity to request it themselves, and euthanasia for children—currently being referred to as “mature minors.”

Michael Cook laid out the state of the discussion over at BioEdge, noting that a number of Canadian pediatricians and bio-ethicists have laid out the case for supporting child euthanasia in the Journal of Medical Ethics, framing Medical Aid in Dying (MAID) as a fundamental part of palliative care and presenting the so-called right to be killed as a fundamental one:

it is wrong to force a person to live in circumstances of unendurable and irremediable suffering and … the wishes of capable patients should be respected within legal limits, especially in such an intimate matter as how they choose to die. Persons, in other words, have a right to life, not a duty to live …

Further, Cook notes, several horrifying conclusions are being reached—including assertions that euthanasia should not be treated differently than other medical procedures, but simply accepted as routine. This includes the specter of children being offered euthanasia without the knowledge of their parents—and potentially even euthanized without parental consent or even parental knowledge:

If MAID is essentially a normal medical procedure, it follows that there is no need for “special procedures for managing communication, confidentiality and capacity assessment”. One consequence of this is that doctors should be proactive in suggesting euthanasia to children for they have an obligation to inform patients of their healthcare options.

What about a young person’s capacity for consent? In Ontario, “young people can be and are found capable of making their own medical decisions, even when those decisions may result in their death”. This is not universally accepted in Canada, so it may be necessary to tweak the law.

How about the role of parents? What if a young person requests MAID but their parents object? The authors argue that if a young person is capable of making their own medical decisions, there is no reason why parents have to be informed. “If we regard MAID as practically and ethically equivalent to other medical decisions that result in the end of life, then confidentiality regarding MAID should be managed in this same way.”

Essentially, these doctors are claiming that young people, who do not have the right to vote or buy cigarettes, should be given the right to ask a doctor to kill them, because perhaps “we regard MAID as practically and ethically equivalent to other medical decisions.” Of course, virtually everyone would agree that assisted suicide—or, more bluntly, suicide—is not like any other “medical decision” for obvious reasons. And the idea that the parents could simply be cut out of the discussion is unbelievable, considering the fact that what we are discussing is doctors killing a child.

Even worse, if assisted suicide is expanded in Canada to both people suffering from mental illness and to minors, we could face the horrifying specter of medical professionals who have, by law, an obligation to provide teenagers suffering from depression with a lethal injection—perhaps without the parents of the teenager even being informed. This will lead us to the fundamental question of the assisted suicide debate that my colleague Blaise Alleyne and I laid out in our recent book A Guide to Discussing Assisted Suicide: Who gets suicide assistance, and who gets suicide prevention? And how do we decide?

The advocates of euthanasia expansion even recognize that the idea of euthanizing children might be hard to swallow for a lot of people, and thus even propose a model for reducing “social stigma,” noting that HIV/AIDS treatment once faced stigma, as well:

If we take the HIV model as our strategy for publicly messaging MAID, we would proceed by providing MAID in a matter-of-fact way that may, over time, reduce the social burden both on patients seeking this procedure and clinicians providing it.

Again, they ignore the fact that treating HIV/AIDS was an attempt to heal or at least to alleviate suffering, not simply end the lives of the sufferers. Suicide cannot be considered healthcare without utterly redefining what healthcare and medicine are, and although the majority of Canadians support legal assisted suicide, I suspect that many of them would draw the line at euthanizing children, especially without the consent or consultation of parents.

The proponents of euthanasia expansion get one thing right, and it is the same point that those of us who opposed legalization have been saying from the beginning: Once you declare suicide to be a right, it will be very difficult to deny that so-called right to other people who are demanding it. Thus, expansion of “end-of-life care” is almost inevitable. The “safeguards” come down, and the very vulnerable people that governments promised to protect soon end up demanding and receiving the right to commit suicide in the supposed safety of a hospital room.

And, once again, we end up killing sufferers rather than suffering.