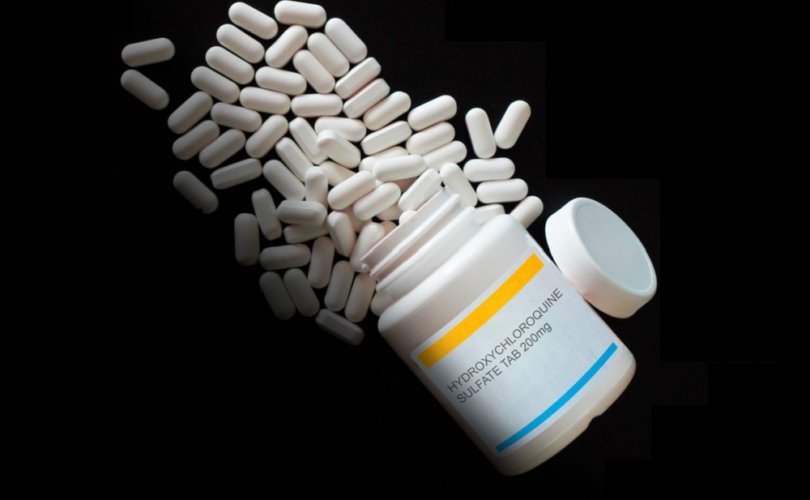 August 24, 2020 (LifeSiteNews) — The French world-level specialist of infectious diseases and promoter of the hydroxychloroquine-azithromycin treatment for COVID-19, Dr. Didier Raoult, and three of his colleagues from the University Hospital Institute IHU-Méditerranée Infection, Marseille, France, posted an “expression of concern” on the IHU’s website last Friday regarding recent papers published by a distinguished medical journal, the NEJM (New England Journal of Medicine). They seek publicly to underscore unheard of sloppiness of methods used for research on possible treatments of COVID-19, the results of which are being inexplicably accepted and published by one of the major scientific medical journals in the English language.

An “expression of concern” is a statement from a scientific journal that makes clear that there is good reason to believe that a paper it publishes may be biased or based on erroneous data. While not always followed by a retraction proper of the problematic article, it amounts to an admission of unscientific handling.

Quoting the Roman writer, orator, and statesman Cicero, who vainly tried to uphold republican principles during the civil wars that would lead to Caesar’s grab of power in 49 B.C., the four authors titled their short paper “Quousque tandem abutere, patientia nostra,” offering the English translation of the Latin text: “How long will you abuse our patience?”

“We ask the same question to the NEJM: how long will you abuse our patience? The biases shown in the studies on COVID-19 have gone beyond, as in the Lancet, for example, everything that has been seen so far. Please give us back a journal that we can use for medical education, that does not contradict all principles we have used for so many years,” they wrote.

In June, The Lancet was forced to put out an expression of concern about a purported study discrediting the use of the well known and widely used malaria drug hydroxychloroquine (HCQ), published some days previously, admitting that the paper by Mehra and others had potentially used fraudulent data in order to make the treatment appear as being not only useless, but accompanied by serious side-effects. At the time, Raoult and his team retorted that they had used HCQ in combination with a macrolide antibiotic, azithromycin, over 3,000 times while keeping patients under close observation, without ever remarking dangerous side-effects. On the contrary, patients at the IHU did better than in the rest of France, and the hospital boasts the lowest death rate due to the Wuhan coronavirus in the country.

Now the NEJM is being accused of similar bias by Raoult and his colleagues, Lagier, Brouqui, and Parola. Needless to say, the New England Journal of Medicine, founded in 1812 and recognized as one of the most prestigious medical journals in print, refused to publish their “expression of concern,” which led them to post a “preprint” version for the general public to see.

All the authors are professors of infectious diseases or microbiology; they underscore their respect — until now — for the NEJM as a “reference journal.”

“However, it appears that for the teaching of infectious diseases, in the context of COVID-19, the NEJM no longer corresponds to the minimum standards that we teach students from the 3rd year of medicine onwards,” they wrote.

Among the bewildering evidence of acceptance of unscientific articles by the journal, they quoted the fact that in some research, patients are being qualified as “infected” with the Wuhan virus without the support of a diagnostic test.

“For COVID-19 therapeutic trials, several publications in the NEJM have reported analyses where patients were not tested but included in the analyses. We teach our students not to do that. In some cases, this reaches extraordinary levels. For example, about hydroxychloroquine as post-exposure prophylaxis, when 821 asymptomatic participants were enrolled through social media to receive hydroxychloroquine or placebo, the analysis was based on self-report of an illness that was “considered to be consistent with COVID” (13%), with less than 3% supported by PCR assays. In JAMA [Journal of the American Medical Association], other studies have been published in which the dosage and duration of the prescribed treatments are not indicated,” they remarked.

Yes, you read that correctly: “asymptomatic participants” were enrolled because their self-reported “illness” — and illness is revealed by symptoms — was consistent with COVID.

Another big problem with studies on HCQ is the recording of side-effects, which can in theory be serious, even life-threatening, or mild — or at least not bad enough to stop a treatment that could prevent death. According to Raoult and his colleagues, the NEJM is publishing papers that do not differentiate among side-effects, lumping them all together in a way that makes an expensive treatment recommended by the World Health Organization appear to be largely harmless.

“We teach students to differentiate between side-effects that have direct consequences and require special care, such as kidney failure, and those that have no consequences or for which accountability is difficult to define, such as insomnia or constipation. We were surprised that in the very favorable study published on Remdesivir, the side-effects of insomnia, constipation, and renal failure were pooled,” they wrote.

Didier Raoult has repeatedly questioned the efficiency of Remdesivir as a treatment for COVID-19, and he has also underscored its danger because of its renal toxicity, in various videos about the “sanitary crisis” published regularly by the IHU website.

The authors called themselves “stunned” by another medical trial quoted by the NEJM: the RECOVERY study that assessed the use of dexmethazone without prior or simultaneous use of antiviral or antibacterial therapies. “Even basic textbooks,” the authors underscored, show that “under these conditions, it could be seen unethical not giving corticosteroids in routine care in such circumstances and that such a trial should never have existed.”

In other words, the NEJM has condoned dangerous treatments, according to Raoult and his colleagues. Accusing the journal of promoting Remdesivir against HCQ, they wrote that some studies “looked more like a Marx Brothers movie than science.”