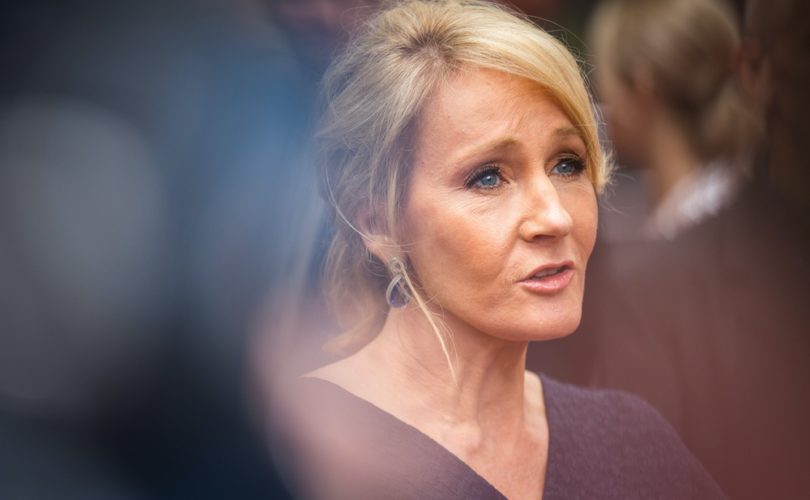 January 2, 2020 (LifeSiteNews) – Back on December 19, I wrote a column in this space on J.K. Rowling’s decision to tweet out her support of Maya Forstater, a 45-year-old tax expert who was recently fired for expressing her view that women could not become men and men could not become women simply by saying so. An employment tribunal rejected her case, with the judge stating that her views could cause “enormous pain” to transgender persons and that Forstater’s view—still held by the majority—is “not worthy of respect in a democratic society.”

In an encouraging turn of events, this ruling appears to have been a bridge too far for many staunch progressives, and even Harry Potter author J.K. Rowling, a woman with impeccable left-wing credentials, appears to have had enough.

“Dress however you please,” Rowling wrote. “Call yourself whatever you like. Sleep with any consenting adult who’ll have you. Live your best life in peace and security. But force women out of their jobs for stating that sex is real? #IStandWithMaya #ThisIsNotADrill.”

The transgender movement promptly exploded into action, and Rowling’s Twitter feed was swarmed by LGBT activists spewing a firehose of hate, accusing her of placing trans lives at risk, calling her a TERF (trans-exclusionary radical feminist), and demanding that she retract her statement. As I wrote at the time, I thought it was likely that Rowling would back down once she realized that the LGBT movement isn’t about #LoveWins, but is very willing to do everything in their power to destroy her for violating our culture’s new blasphemy laws. The script is a familiar one: The mob descends, the target retracts and apologizes, and the LGBT mafia’s power is cemented further.

But rather shockingly, Rowling decided not to play along. She posted the tweet and left it there. When the LGBT lobby group GLAAD contacted Rowling’s people to arrange a meeting in which they would explain to the author why she was wrong, Rowling declined the opportunity. The thought pieces bemoaning Rowling’s apparent destruction of her literary legacy are still popping up, but Rowling is ignoring everyone. As Princeton professor Robert P. George noted: “The gender gnostics invite JK Rowling to re-education camp and she says no. They realize that there’s now a lot at stake and they must bend her to their will. If she refuses to cave & survives cancellation she licenses wholesale dissent from Woke orthodoxy. This is now a Big Deal.”

Others have come to her defense. Comedian Ricky Gervais’s Twitter missives fairly dripped with sarcasm: “Those awful biological women can never understand what it must be like for you becoming a lovely lady so late in life. They take their girly privileges for granted. Winning at female sports and having their own toilets. Well, enough is enough.” Ayaan Hiris Ali also tweeted her support: “Very brave J K Rowling for standing up for women.” Trans activists were watching their grip on the public conversation slip before their very eyes.

And so it appears that in the waning days of the decade, J.K. Rowling (of all people) may have done enormous damage to the most powerful tool the LGBT lobby has to control the public narrative and enforce their new dogmas: Cancel culture. As Megan McArdle noted in the Washington Post:

Institutions reward the mob by firing employees, yanking advertising or inflicting other punishments. Those in the mob-ridden middle quietly think this insane but also quietly think the better of saying so out loud. Which is how the Terrible Tens became the decade of the online mob.

It would be too neat a bit of plotting if the decade ended with the discovery of the antidote to this proscription plague. Yet I wonder if that isn’t what happened when the mob decided to cancel J.K. Rowling, and she demurred.

Rowling’s tweet earned her all the denunciations and anguished think pieces that a good mobbing entails. The usual script for what would follow: Rowling vanishes the tweet, apologizes and goes on a listening tour until she had been sufficiently reeducated to explain how wrong she’d been. But Rowling didn’t recite her lines…The censorious power of Mrs. Grundys always depends on the cooperation of the governed, which is why their regime collapsed the moment the baby boomers shrugged off their finger-wagging. If Rowling provides an unmissable public demonstration that it is safe to ignore the current crop, we can hope others will follow her example, and the dictatorship of the proscriptariat will fall as quickly as it arose.

Rowling has now proven that high profile figures can announce their dissent from our new sexual orthodoxies, get “cancelled,” and survive it with little effect. Cancel culture only works when everyone plays along and agrees to actually cancel the person being targeted, and trans activists are fully aware that if their attempts fail, others will take notice. They tried to get Jordan Peterson fired, and he got rich and famous. They tried to force Rowling to back down, and she ignored them. They’re complaining that Ricky Gervais is a “transphobe” and as such should not be allowed to host the Golden Globes, but no cancellation has been forthcoming.

If this keeps up, their threats may soon fall on deaf ears. And if that happens, we’ll know that 2019 was the highwater mark of their cultural power.