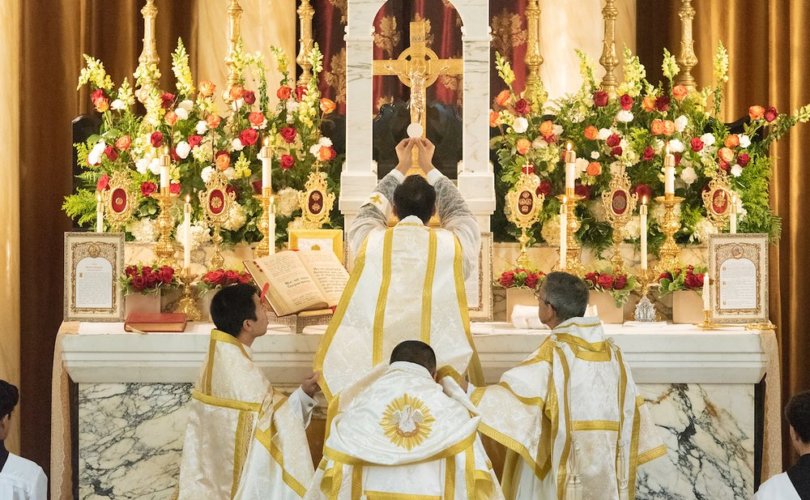 November 14, 2018 (LifeSiteNews) – Thanks to Cardinal Ratzinger, Cardinal Sarah, and the growing availability of the usus antiquior or Extraordinary Form of the Roman Rite (recently offered at St. Peter’s basilica in great splendor as part of the annual Populus Summorum Pontificum pilgrimage), many Catholics are aware that the traditional way of offering the Holy Sacrifice of the Mass is for the priest, together with the people, to face eastwards, in expectation of the Christ, “Sun of Justice” (Mal 4:2; cf. Jn 8:12, 9:5; Mt 17:2) whom Scripture calls “the Orient” (Zech 6:11–12), who “mounted above the heaven of heavens to the east” (Ps 67:34 Vul.) and who, we are told, will return from the east (cf. Acts 1:10–11, Mt 24:27). Those who offer the Mass in this age-old way are often said to be celebrating “ad orientem,” in other words, “towards the east.”

Recently at New Liturgical Movement, I published an article in defense of ad orientem entitled “How Contrary Orientations Signify Contradictory Theologies.” As often happens, this one elicited a strong reaction from a member of the clergy, who wrote to me as follows:

Apropos your current article on ad orientem, may I ask a simple question? Where is God? Up there, out there? Or with us, among us?

I imagine everyone would say he is both, he is everywhere, but clearly no arrangement of physical space in our churches or other buildings can adequately convey both his immanence and his transcendence. Seeing, however, that after centuries of ad orientem worship, emphasising the apartness, remoteness and unapproachable glory of God, the Christian churches seem to be in continual decline, many would contend that it is high time to redress this distorted balance and emphasise the presentness of God with us. This is what reformed liturgy seeks to do. It is, of course, a senseless caricature to see it as priest and people greeting or confronting each other in an anthropocentric way; rather it is priest and people gathering together around the altar which is the focus of our worship, knowing that God in Christ is present in our midst. If we can rediscover God among us we might be able to realise more appropriately his glorious apartness as well. It is not a matter of contradictory theologies, but of complementary ones.

So far as I can see, we do not relate to God solely as an object of worship out there or up there, but also as a reality, a real presence in us and with us. Our symbolism cannot adequately convey all of this, so we make our choice of what we want to emphasise. Traditional worship has emphasised the glorious otherness of God; many now think we need to redress the balance towards his presence with us.

The very earliest forms of eucharistic liturgy were, I believe, domestic. The book of Acts records the first followers of Christ breaking bread in their homes. It is surely highly unlikely that they would have set up anything like the medieval church with nave and sanctuary, and far more likely that they would have gathered at or around a simple table. If anything, the earliest eucharist was probably more like our reformed liturgy today than the grandiose ad orientem High Mass. Since women take a leading role in Jewish domestic liturgies, it is even possible that they also did so in the first Christian eucharist!

With best wishes, yours (etc.)

To his credit, this priest quite capably presents some of the main arguments used against advocates of ad orientem worship.

Here is my response:

I think this is the wrong way to go about the question. God is indeed everywhere. That doesn’t help at all with how liturgy should be done. From the fact of His omnipresence, we might end up with the attitude of our religion-free hippies: “I worship God on the beach or in the mountains.”

The question is rather: “What symbols do we use in Christian worship to express our relationship to God and His to us?” And to answer that question, we have to look to the three principles of cosmos, history, and mystery, as Ratzinger argues in The Spirit of the Liturgy.

The universe (cosmos), which is God’s “First Book,” gives us the rising sun from the east. That is why God’s Second Book (i.e., Sacred Scripture) talks so much about the Orient. The sun, the moon, and the stars were given to men “for signs and seasons” (Gen 1:14). If they are signs, what are they signs of? We ignore nature at our peril—now, more than ever, when artifacts and technology insulate us from reality. That the sun rises in the east signifies that Christ is the true light who enlightens every man (Jn 1:9).

Church history, for its part, gives us a consistent witness of oriented churches where the nave gives way to the sanctuary, which gives way to the altar. We can be sure that the custom of facing east to worship, which emerged into the public eye across the entire Christian world as soon as Christianity was legalized in the early 4th century, was not something made up on the spot or concocted by proto-medieval clericalists, but something rooted in the habits of prayer handed down from the Apostles themselves, as St. Basil the Great testified in his treatise On the Holy Spirit (375 AD). Eastward prayer would not have needed to be elaborate to remain symbolically effective. All later architecture and ceremonial is, as it were, the pearl that forms around this initial grain of sand.

Mystery, the third criterion, tells us that we should not worship in such a way that we risk deifying ourselves or our community. Our worship has to be outward and upward in order to reinforce in us through sensible signs that we will not save ourselves but must seek salvation beyond ourselves. True though it is that the soul is the temple of the Blessed Trinity, it can be dangerous to shape public worship in terms of God’s immanence within us, since fallen human beings tend to be self-absorbed and self-exalting.

The traditional forms of worship greatly accentuate both God’s transcendence and His immanence: the former in the ways already mentioned; the latter by the fact that our worship is physical, sensuous, and concerns food and drink and other ordinary things, through which the infinite and eternal God makes Himself finite (so to speak) and comes to us in time. I have never found that a Low Mass or a High Mass prohibits or interferes with awareness that God is within. On the contrary, the long opportunities for prayer, the intensive preparation for holy communion, and the time spent in thanksgiving for the gift of Our Lord are ways in which I have found my interior life, and my sense of the astonishing humility of God who comes to dwell with us, to be greatly augmented.

While a decline in numbers of Christian worshipers began in some places already in the middle of the 20th century, it is a fact that the Catholic Church was booming throughout most of the world, with vocations, conversions, baptisms, and other statistics riding high. What happened? The increasing humanism of the 20th century came to a head in the antinomianism of the 1960s, when progressivism, liberalism, and hedonism introduced profound unrest, malaise, and dissatisfaction with inherited forms of life and piety. But this was not the fault of the forms; it was the fault of those who rejected them in favor of sex, drugs, and rock n’ roll—or, more innocently but no less fatally, felt banners, casual presidership, and folksy kindergarten church songs.

The emphasis on God’s “presentness”—“We are the People of God!”—coincided with the greatest exodus of Christians from public worship ever seen in the history of the world. If some reform was needed, what we got was certainly not it.