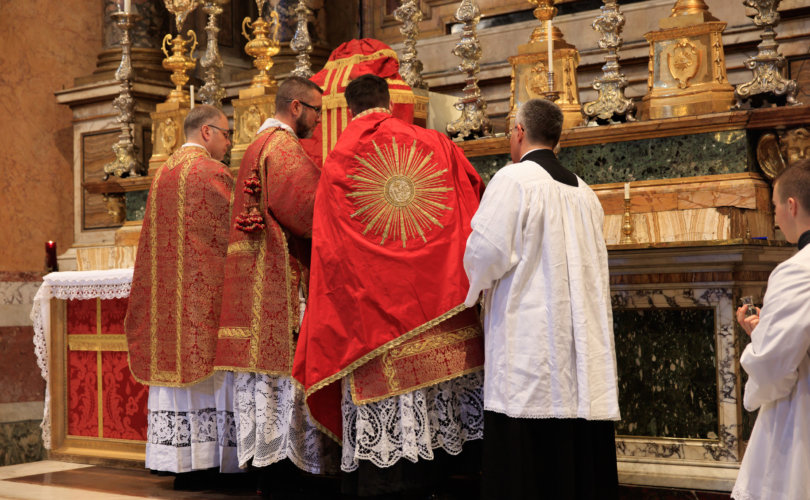 June 21, 2019 (LifeSiteNews) – I have been reflecting on Henry Sire’s article about the recent decision by the Grand Master of the Order of Malta to ban the celebration of the Traditional Mass in the Order. He seeks to debunk the idea that the former Grand Master, Fra’ Matthew Festing, who likes the Traditional Mass, was seeking to impose this Mass onto everyone in the Order, and was simultaneously trying to create (along with Cardinal Burke, the Order’s Cardinal Patron), a center of opposition to Pope Francis and all he stands for.

This narrative is set out with great enthusiasm, but absolutely no evidence, by Christopher Lamb of the UK’s liberal Catholic weekly The Tablet, and by Austin Ivereigh, the English biographer of Pope Francis, among others. Sire points out (to simplify) that Festing believed that Pope Francis had ordered him to deal with the problem of his subordinate, Albrecht von Boeselager, distributing condoms as part of the Order’s charitable works. Festing was forced out (according to Sire) by an alliance between Boeselager and Cardinal Parolin, the powerful Secretary of State, who had a common interest in stopping the Order of Malta disputing the way a large sum of money, supposedly left to the Order, was being distributed.

One of the curious things about these rival narratives is the uncanny resemblance they have to the rival accounts of what went wrong with the Franciscan Friars of the Immaculate, a traditionally-inclined order which has now been all-but suppressed. Liberals insist that the problem was that the founder, Fr Stefano Manelli, was trying to force all the Friars to adopt the Traditional Mass, and that Pope Francis was obliged to intervene for this reason. The rival theory (again, to simplify) is that at least part of the motivation of the intervention was money, which Fr Manelli was accused of siphoning off, a charge later dropped at the insistence of the Italian courts. (The money was in the charge of lay trustees on the order’s behalf.)

In the Church, and particularly in Italy, money and ideology can be entwined in all sorts of complicated ways. Disputes about the liturgy were not irrelevant in either case, but it wasn’t Pope Francis who first intervened in the Friars: this took place under Pope Benedict XVI. And it is simply false to claim that Fr Manelli or Fra’ Matthew Festing attempted to force anyone to celebrate the Traditional Mass.

What is clear from these tangled issues, however, is the attempt by Lamb, Ivereigh and others to create a narrative of tyrannical traditionalists and to distract attention from the financial aspects of the stories. This focus on the liturgy to the exclusion of all other factors is an attempt to reduce Church politics to a one-dimensional struggle, which people with diametrically opposed views to Lamb and Ivereigh can also find attractive. It should be resisted, however, because it gives a completely distorted sense of what is going on.

It may be true that resistance to the liberalization of the Church’s teaching and discipline on marriage and divorce is correlated with liturgical traditionalism, but that is not to say very much. Plenty of people who aren’t attached to the traditional Mass have also been vocal in defense of the indissolubility of marriage. This is particularly the case in Italy, where liberalism—for want of a better word—about liturgy is not closely aligned with liberalism about doctrine.

Above all, Pope Francis himself does not seem to take the view that liturgical traditionalists are necessarily his enemies. Not only has he refused to take steps to limit access to the Traditional Mass, but he has made startling concessions to the Society of St Pius X—an order of priests who celebrate the older Mass outside the structures of the Church—in order to bring about a reconciliation.

These facts are often ignored by the liberal press because they appear to be incomprehensible: they don’t fit the narrative peddled by the likes of Lamb and Ivereigh. Less ideologically-driven news analysis can do better. It seems that Pope Francis is not especially concerned about the liturgy: it is not the lens through which he sees other issues. When he does talk about the liturgy, he seems more worried about the ‘Reform of the Reform’, perhaps because it has greater potential to disrupt the liturgical life of ordinary Catholics. He is also concerned about clerical ‘rigidity’, whatever exactly that means, but this is a concern which applies to the ‘new movements’ as well as to traditionally-minded priests and seminarians.

In short, it may not trouble Pope Francis if his lieutenants want to move against the traditional Mass here or there for tactical reasons; but nor is he worried about its successes. What has happened to the Order of Malta and to the Franciscan Friars of the Immaculate is tragic, but it does not presage a world-wide persecution of the Traditional Mass.