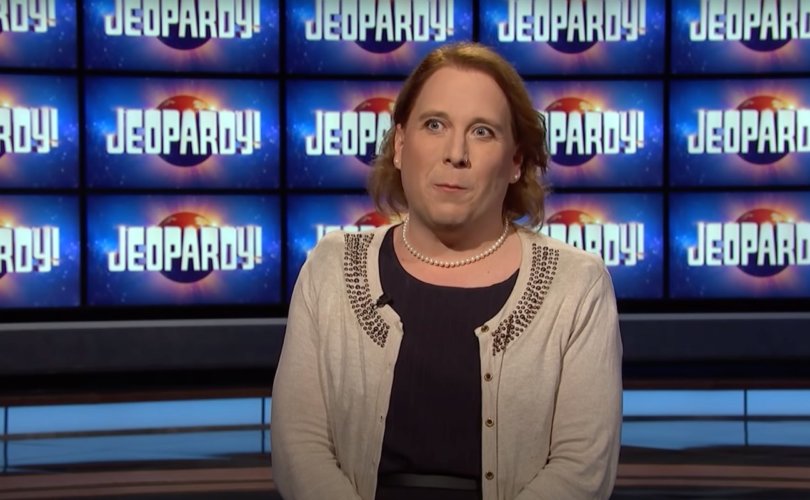 (LifeSiteNews) — Since mid-November, the Jeopardy champion’s podium has been occupied by a man who presents himself as a woman, and the show’s host and staff have gladly gone along with the national pop culture mis-gendering pretension.

“Amy” Schneider is clearly a guy with an impressive mind.  To date he has won over $850,000 dollars on the show, qualifying him for a coveted spot on the 2022 Tournament of Champions to be broadcast later this year.

Perhaps the most shocking moment came when the show’s producers — and amplified by “mainstream” legacy media outlets — crowned Schneider as “the highest-earning female contestant in the game show’s nearly 57-year run.”  The move has knocked Larissa Kelly from her rightfully-held title as the reigning all-time female money winner.

ABC, NBC, CNN, The New York Times, People, and virtually every other corporate media source have now referred to Schneider with feminine pronouns.  And that’s no surprise: Guidelines issued by legacy giants Associated Press (AP) and Reuters direct journalists and editors to do so.

As I watched the show last Wednesday, the extreme conceit from liberal elites prompted me to post on Facebook:

A guy pretending to be a woman eclipses real women’s achievements on Jeopardy, becoming the highest-earning ‘female’ contestant in the show’s history.  This is a man, not a woman.  Don’t allow yourself to buy into the woke lie.

Two days later, conservative podcast host and author Matt Walsh chimed in on Twitter, noting just how far liberal elites have taken their pretension that a man is a woman simply because he identifies as one.

“The greatest female Jeopardy champion of all time is a man,” said Walsh.  “The top female college swimmer is a man. The first female four star admiral in the Public Health Service is a man. Men have dominated female high school track and the female MMA circuit.”

“The patriarchy wins in the end,” added Walsh.

The greatest female Jeopardy champion of all time is a man. The top female college swimmer is a man. The first female four star admiral in the Public Health Service is a man. Men have dominated female high school track and the female MMA circuit. The patriarchy wins in the end.

Walsh is right. If pop culture’s trans-trend is allowed to continue unabated in sports and intellectual pursuits, ambitious sexually confused men and boys may soon rob women and girls of most of their titles.

On Friday, New Year’s Eve, Jeopardy went full LGBT-woke when the contestant standing at the podium next to Schneider’s was a man who said he has a “husband.”