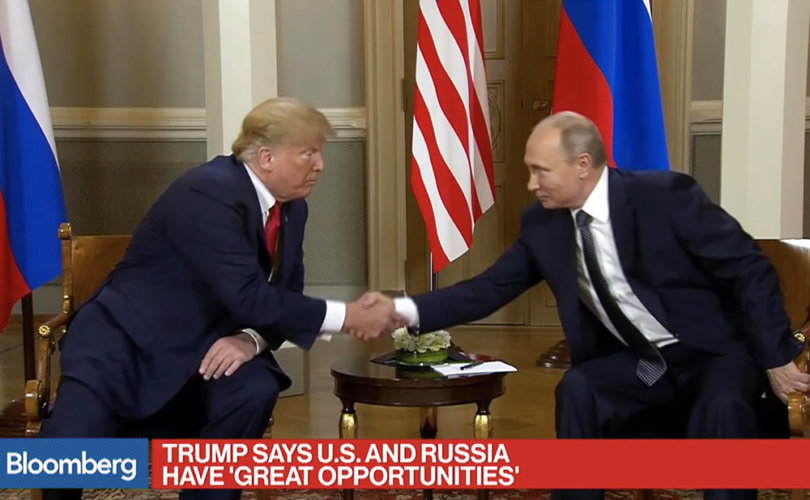 July 18, 2018 (LifeSiteNews) – Don’t fall into the dangerous trap of condemning Trump for his performance at the Helsinki summit with Putin. If anything, regardless of some bumbling by Trump during the press conference, Trump should be heaped with praise for what he did in Helsinki. It appears that too many want a war with Russia, a potential war that Trump went a long ways to avoid, and contrary to the massive media hysteria, without at all weakening the US position.

We will find out in the months ahead exactly what agreements were reached during the lengthy private meeting between the two top world nuclear powers. I can’t see that anything but very positive results would have come from that meeting given Trump’s consistent track record on international affairs.

Trump has been massively strengthening the US military, just as Ronald Reagan did, for the purpose of negotiating from a position of peace through strength. Just prior to the Helsinki summit he also berated his weak NATO allies for their pathetic military investments and that berating has appeared to result in a decades overdue significant strengthening of NATO allied commitments. He also berated the NATO partners for putting themselves into a dangerous dependency on Russian oil and gas. It appears that that situation is also going to be changed because of Trump’s actions.

If those are the actions of a Russian puppet or collaborator then I am  a monkey’s uncle.

Trump derangement syndrome has reached an all time high as a result of the Helksinki meeting, To me, that means only one thing – this was Trump’s grreatest accomplishement ever that the New World Order lackeys cannot tolerate. Trump keeps upsetting all of their plans and, it appears, this has been their worst defeat.

RELATED: The surprising real reason for the hate against Donald Trump

There are others who are doing a much better job than I am capable of in writing and speaking about the very positive significance of what President Trump achieved at the Helsinki summit with Russia’s President Putin. I strongly recommend the article by Brietbart’s John Nolte for one and this interview with U.S. Russia expert Stephen Cohen.

Donald Trump is hated above all for his intense commitment to traditional Amerian principles. And among those principles are a strong defense of life, family, faith and free speech. That is why this insane reaction to his Helsinki meeting with Putin should be of great concern to readers of LifeSite. We cannot afford to have this man removed from office or crippled by sanctions and other actions.

President Trump, it seems, is all that we have going for us today on the national and international scale. Even the pope and the Vatican are no longer with us, for the first time in history.

Keep seeking and reading alternative media reports and analysis on anything related to President Trump. Only there will you find the truth.

62 more reasons to be grateful for President Trump

The truth about Trump, the border, and ‘Kidtrina’