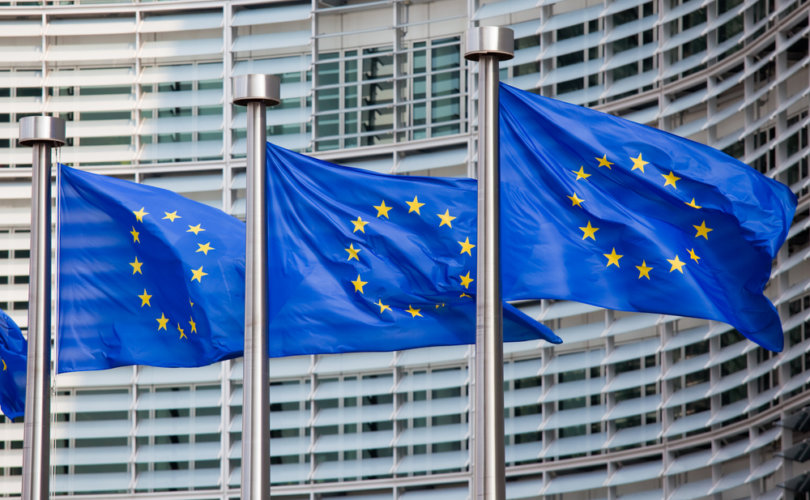 (LifeSiteNews) — I am no fan of the World Economic Forum, the nongovernmental lobbying organization that hosts a tradeshow of dystopian ideas for the elites each year in Davos, Switzerland. I have Klaus Schwab’s The Great Reset sitting on my desk (a fascinating combination of appallingly bad prose and sinister suggestions); I’ve interviewed public intellectuals such as Paul Kingsnorth and N.S. Lyons on the influence of the organization; I think that like George Soros, Schwab’s vision for our global future is an ugly one.

But I do have one niggling problem with all of the attention the WEF has been getting lately: it is distracting people from organizations that are, for social conservative and traditionalist people, far more dangerous.

One of those is the European Union, which is currently attempting to bully Hungary into bowing the knee after it banned LGBT propaganda targeted at children (by referendum), and is also targeting Poland for its pro-life laws. As an organization, it functions as an enforcer for the European LGBT movement and the international abortion industry, and it wields not just influence but very real power.

The second is the United Nations. Most social conservatives have an instinctive and healthy suspicion of the UN while simultaneously ignoring much of what goes on there. Unfortunately, the LGBT movement and abortion activists are extremely engaged and have proven to be master manipulators in the arena of international politics.

Organizations and lobbyists, which most of us have never heard of, work relentlessly to get language affirming the “right” to abortion and endorsing the LGBT agenda in international agreements and treaties; these statements, even when nonbinding, can then be used by politicians and judges in developing countries to justify throwing out their own laws and traditional norms.

The New York-based organization the Center for Family and Human Rights (C-Fam) works tirelessly to document these goings-on, and I’ve often recommended following their work to our readers here. A recent C-Fam report highlights precisely what I’m warning about here.

The Biden Administration, in partnership with the European Union, is working together to push the UN General Assembly to adopt a resolution that would enshrine abortion as a fundamental human right — over the objections of many countries where pre-born children are protected under law. As C-Fam reported:

Delegates are in the final phases of negotiating a General Assembly resolution that declares “access to safe abortion” as a policy that governments should pursue to “ensure the promotion and protection of the human rights of all women and their sexual and reproductive health”…The resolution would be a significant victory for abortion ‘rights’ after years of stagnation in UN debates and give a clear mandate to UN agencies that abortion should be promoted as a human right. The language about “safe abortion” in the resolution has been rejected in multiple negotiations of other resolutions over the past decade.

— Article continues below Petition —
PETITION: Stop Walmart from pushing abortion for employees
Show Petition Text
5425 have signed the petition.
Let's get to 6000!
Thank you for signing this petition!
Add your signature:
Show Petition Text

This has faced backlash, but Western diplomats are determined to ramrod it through. C-Fam reported that the Japanese diplomat who oversaw negotiations stated that nothing could be added or subtracted to the section on abortion, even when fifteen countries sought to block the tabling of the resolution. C-Fam heard from insiders that the EU representatives worked aggressively, and that it was clear to some that another agenda was at play. Indeed, there appears to be more at stake than just abortion:

Delegations not only objected to the language about abortion in the resolution, but they also expressed concerns about language and terms that could be used to support policies that promote homosexuality and transgenderism under the pretense of addressing sexual violence, of which women are predominantly victims.

The language on abortion inches closer to establishing abortion as an international human right but falls short of such an outright declaration because it includes the caveat “where such services are permitted by law.” The specific term “safe abortion” has not been widely accepted by UN member states. And the language tying abortion to human rights has been even more controversial in negotiations.

There is no international consensus on abortion, and thus UN diplomats have generally been careful to affirm that laws governing feticide are the purview of individual governments. But UN branches such as the UN Population Fund and the World Health Organization (WHO) have aggressively promoted abortion as healthcare, and most other UN-affiliated organizations do the same despite the UN General Assembly’s supposed neutrality.

As Obianuju Ekeocha laid out in her essential book Target Africa: Ideological Neocolonialism in the Twenty-First Century, it is Western countries that are utilizing international bodies across the board to relentlessly push a pro-abortion, anti-family agenda.

It is a good thing that the machinations of influential organizations like the WEF and Open Democracy and others are being more closely scrutinized, and that their previously ignored plans for our democracies are being discussed and opposed.

But let’s not forget to keep our eyes on international bodies such as the United Nations and the European Union, which very often wield hard power rather than soft influence — and are marshalling that power into fierce and effective attacks on life and family.