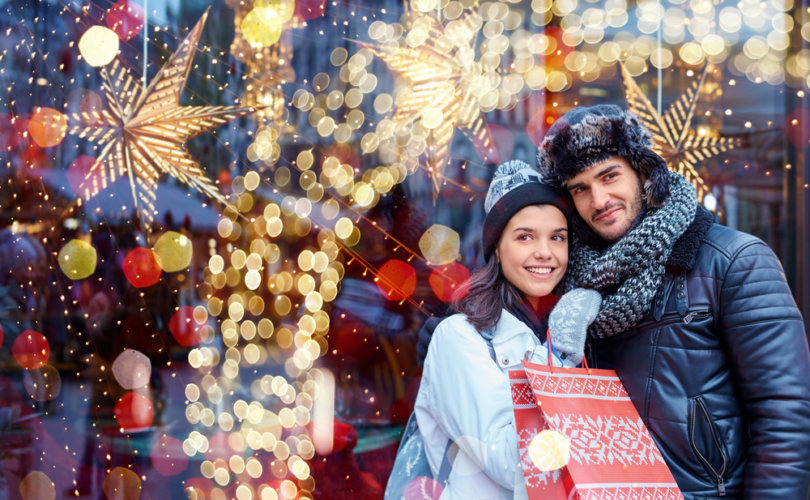 The words “hate” and “Christmas” should never go together, so if you find the first word creeping into your thoughts about the second, I suggest quitting Christmas shopping altogether. After all, Christ was born in a stable, not the shopping mall. We might find Him at the big box store — His ways are mysterious — but it seems unlikely.

Therefore, like many writers before me, I suggest buying presents for your loved ones after Christmas, if possible before December, and hiding them away in a dedicated place until Christmas Eve. If this sounds familiar, it’s because that’s what the Ingalls family did in The Little House books.

Thus, I recommend buying Christmas presents when you find shopping fun, for example when on holiday (or while living) in a place your family considers exotic. Scots don’t think Scotland is exotic, but my Canadian family was pleased when almost all of them got wool scarfs in the clan tartan.

Another sanity-saver I suggest is creating a budget for your gifts, deciding how much to spend on them, and then making that figure a secret you take to the grave. Meanwhile, consider gifts you would like that cost the same or less as the average of the gifts you are giving. This way you are prepared if someone asks you what you would like for Christmas. (“I don’t know, anything,” helps no one do their shopping.) You can make life even easier for your gift-giving loved ones if you just state your Christmas wishes on whatever social media you haven’t been banned from yet.

Some families agree in advance how much they will spend on Christmas gifts for each other, at least among the adults. Sometimes siblings club together to buy the others more costly presents. Personally, I can’t imagine discussing such expenses with my family members, who grab gifts back to peel off forgotten price tags, but try whatever would work for yours.

Some young parents beg well-meaning uncles, aunts, and grandparents not to buy certain toys, as their houses are overflowing. I know of houses where Lego, so easily stuffed up infant noses and so perilous to adult feet, is banned. Thus, even if your family is too shy to come up with a mutual agreement about costs, you can certainly ask advice about gifts for children not your own.

When it comes to loved ones, we all have a mental list of people who would be surprised or even hurt if we didn’t give them a Christmas present. We might also have friends to whom we would like to give presents but who might feel awkward about the expense. Thus, I would suggest reserving most of your Christmas gift budget for your family members and give your friends the gift of time via Christmas cooking and baking. (I am writing this beside the stove, for a lucky friend is going to get a jar of candied orange peel for St. Nicholas’ Day.) I find cooking and baking Christmas treats great fun, so I feel absolutely no resentment for the time, effort, and ingredients needed, which brings me to my most important point.

A LifeSiteNews reader wrote in response to my column against Black Friday, saying that she resented the stress felt and money squandered in the quest to buy everyone the perfect Christmas present. I was struck by that, for I used to feel the same way. I have a biggish family, and I would have to hit the bullseye of perfect present over 10 times.

But as Voltaire advised (a stopped clock being right twice a day), don’t let the perfect be the enemy of the good. The whole point is the giving, not the gift. The gift is simply your ambassador, rather like the lit candle you leave behind in church: symbolically speaking, the candle continues your prayers there on your behalf. A gift stands in for your presence with the loved one.

Thus, get some good ambassadors, but don’t worry too much about their reception. After all, you never know which ones will make history. The two most important Christmas gifts I ever received were the teddy bear I got when I was 4 and a blank book I got when I was 7. The teddy bear is sitting on my bed, and the blank book — which had my name on it in gold letters (affixed by the giver) — began my writing career.

This idea of Christmas gifts as our ambassadors is particularly meaningful for my Scottish husband and I this year because Canada’s COVID totalitarianism means that we cannot go there ourselves. It’s outrageous, but this is meant to be a cheerful piece, so let’s not go to the land of the crankypants either.

Instead, I’ll say that I am profoundly grateful that we were able to fly unimpeded to Canada in 2019 and that all our Canadian family celebrated Christmas Day together with us. What a Christmas gift from God that was. Tibi gratias ago, Domine.