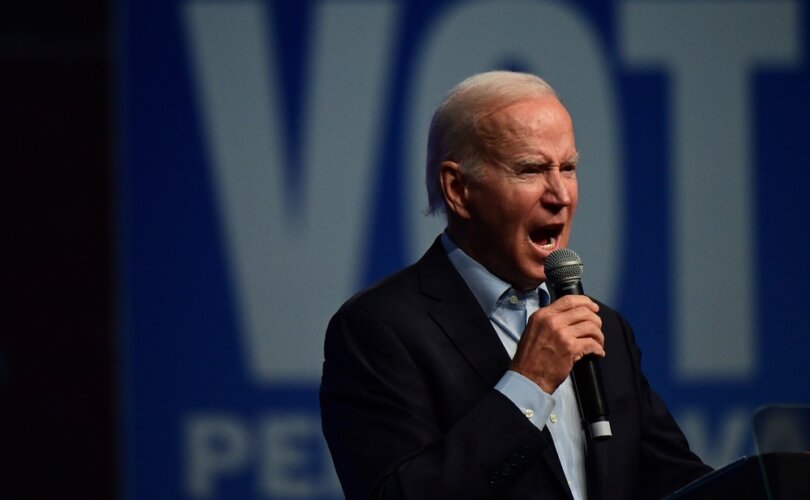 (LifeSiteNews) – It is genuinely difficult to watch videos of Joe Biden these days. There’s the confusion—getting lost on a stage, shaking hands that aren’t there. There is the careful, deliberate, stiff-legged walk, which resembles that of a drunk groomsman desperately trying to pull it off. There is the memory lapses; the Clint Eastwood squint at the teleprompter. I cringe at many of the jokes about his performance because he simply strikes me—and any honest observer—of an elderly man who lacks the capacity to lead the world’s leading (for the moment) superpower.

But Biden’s behavior over the last year—and especially in the runup to the midterms—reminded me once again that he is not simply an aging, pitiful man being exploited by the radical progressives who are clearly setting the agenda for his administration. He’s more like one of the Capitol leaders in The Hunger Games—degenerate, bloodthirsty, and intent on the transformation of his country. And Biden, unlike AOC and other millennial squad members, is old enough to know better. He went, overnight, from a “reluctantly” pro-choice-Catholic squish to a president campaigning on abortion until birth weekly, sometimes daily.

If you think I’m being too harsh, consider the fact that Biden’s White House has been a revolving door for transgender activists, drag queens, and their friends. I’m not just talking about the “first openly transgender admiral,” Richard “Rachel” Levine, or his crossdressing non-binary nuclear official currently facing charges for stealing a woman’s luggage. Biden has made a point of ensuring that these activists are front and centre, sitting down with notorious transgender social media influencer Dylan Mulvaney, who regularly posts videos of himself cosplaying as a woman and waggling for the camera. In that interview, Biden told Mulvaney that opposing sex changes and puberty blockers for kids is “wrong.”

Think about that: the president of the United States, who as a young senator would have been spitting mad if anyone had suggested he would one day stake his reputation and career on the chemical castration and surgical mutilation of children, is now sitting down with cross-dressers who mock “girlhood” to state his firm support of this barbaric industry. Abortion, apparently, isn’t enough—there’s more than one way to destroy a child. And if you question my use of the word “degenerate,” watch this video, if you can stomach it. The Biden Administration isn’t following the LGBT movement. They’re doing everything they can to lead it.

Joe Biden is an evangelist about his new views, too. His State Department pushes the LGBT agenda all over the world, using America’s position in the world to bully other nations into changing their values. Taxpayer dollars are even funding drag performances in countries like Ecuador (that cost $20,000) to “promote diversity and inclusion.” (Can you imagine how Democrats would react if it turned out the State Department was giving money to struggling churches in the developing world? Only one kind of evangelism is allowed.) Joe Biden is using the government of the United States of America as a force for evil worldwide, and he’s using money taken from ordinary Americans to do it.

So yes, Joe Biden is an elderly man who is obviously losing his faculties. But he is also an evil man who is using his last reserves of strength for objectively evil ends. It is true that he has been extraordinarily corrupt for a very long time. But the moral corruption of his political career is far worse. Joe Biden’s career trajectory has been that of a man ever more committed to the worst crimes of our age. It is sad to watch any elderly person struggle as their strength leaves them. It is worse to see what Joe Biden has become.