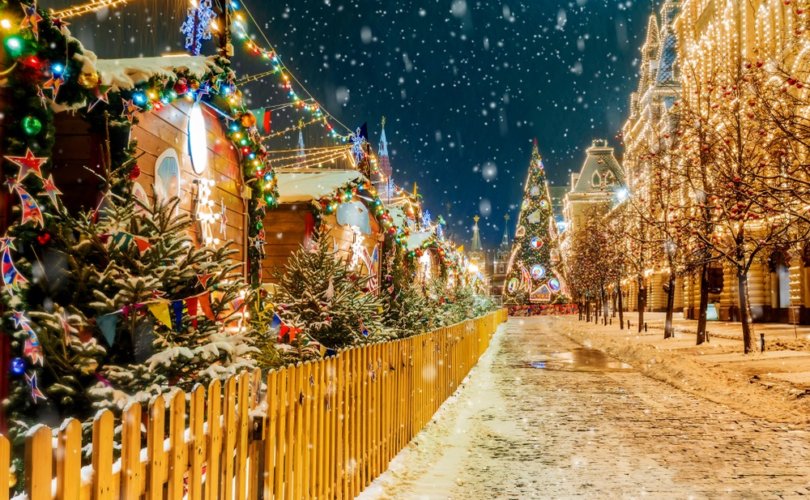 December 24, 2019 (LifeSiteNews) — The secular world “prepares” (if we can use that word) for Christmas with months of garish decoration, holiday treats, and spending sprees, but when December 26 rolls around, the world already feels that Christmas is “over.” At most it will allow itself a day or two of recuperation from excess jollity and then get back to work. In a best-case scenario, decorations might stay up till January 1 or a bit later, for “ringing in the new year.” After that, the season of celebration is over.

Catholics ought to have a totally different conception of Christmas. Before Christmas, we observe the penitential season of Advent, preparing for the great feast without too much overt joy. Traditionally, families would decorate the Christmas tree shortly before the great day, on the 23rd or 24th. Come Midnight Mass, we usher in the Nativity of the Lord, which is intensely celebrated for an octave (eight days, from December 25 to January 1, the Circumcision, also known as the Solemnity of Mary, Mother of God). The Nativity extends out to Epiphany on January 6 (the famous “twelfth day”) and inaugurates forty days of Christmastide, ending on February 2 with Candlemas or the feast of the Purification of the Blessed Virgin Mary, also known by its Greek title, the Presentation of the Lord. In other words, four concentric circles of celebration: (1) Christmas, (2) the octave, (3) the twelve days, and (4) the forty days.

It is very important for us not to surrender to the secular approach that, in a way, celebrates Christmas before Christmas and not afterward. We should really make an effort — in the way our homes are decorated, the way we observe Sundays and holy days, the stories we read and the other activities we do in the house — to keep the spirit of Christmas alive, even if at a “low burn,” throughout this period from December 26 to February 2. Yes, the great feast is that big of a deal! Such observance also becomes a countercultural catechesis in one of the central mysteries of the Christian faith: the Incarnation of the Son of God. This is the pivot point of all human history and of the story of each man, woman, and child.

Unfortunately, the liturgical reforms in the Catholic Church have not necessarily helped families to keep the Christmas season as well as it might be kept. The first problem was the total abolition of “commemorations.” For many centuries, the Church made a fitting observance of several events at once by the use of an additional set of prayers or “orations” at Mass (Collect, Secret, Postcommunion). So, while December 26 is the feast of St. Stephen, December 27 that of St. John, and December 28 that of the Holy Innocents, etc., there were always additionally the orations of Christmas, so that one was continually reminded that Christmas is a feast for eight days. Now it can often feel like a feast of a single day.

The second problem is the loss, for all intents and purposes, of the feast of Epiphany, which, instead of being kept on January 6 (as it has been kept for millennia in East and West), is now slung to the most convenient nearby Sunday, so as not to cause any bumps or surprises in our workaday routine. This has the effect of neutralizing Epiphany as anything special, making it just like every other Sunday, instead of seeing it as a feast of light bursting in on the world “by surprise,” just as it bursts into our lives on a Monday or a Thursday or whatever day it happens to be, throwing off our rhythm and making us adjust to God’s lordship over time. He actually needs to tell us to throw a party, because He knows we will be too lazy or preoccupied to do it otherwise!

Reading the great liturgist Dom Prosper Guéranger helps one to gain an appreciation for what a tremendous feast the Epiphany is. For so many reasons, it is great and glorious — indeed, the Epiphany shares with the feasts of Christmas, Easter, the Ascension, and Pentecost the honor of being called, in the Roman Canon of the Mass, “a day most holy.” It should be celebrated with all gusto; we may hope that someday the Church authorities return it to its former status as a holy day of obligation on January 6.

The third problem is the abolition of “Epiphanytide,” a season that lasted for several weeks after Epiphany, leading up to Septuagesima.

Fortunately, all three of these things — the commemorations, the Epiphany, and Epiphanytide — are still observed wherever the traditional Latin liturgy has endured or returned. The number of churches taking advantage of Summorum Pontificum, and the number of families able to shape their family devotions accordingly, continues to rise.

We should keep the Christmastide spirit ablaze with home decor and devotions until the Feast of the Purification (or, if Septuagesima Sunday falls before February 2, to the Saturday of that weekend), or, at very least, until the Baptism of the Lord, traditionally commemorated on January 13, the octave day of the Epiphany. Leave the tree, lights, and decorations up until January 13 or February 2! The same is true for Catholic churches: they should not buckle to secular pressure, but retain their trees, wreaths, lights, and other signs of Christmas well into the month of January, if not all the way to Candlemas. We are challenged to be maximalists, not minimalists; to heed St. Paul’s advice that we hear on Gaudete Sunday: “Rejoice in the Lord always, and again, I say, rejoice!”

(To read more about the fairly complex history of the Christmas season in its various layers, see Gregory DiPippo, “When Does the Christmas Season End?” and “Liturgical Notes on the Purification of the Virgin Mary.”)

This is a lesson especially needed by all Catholics who live in countries largely culturally Protestant, such as the United States of America, where the liturgical cycle played little role in shaping imaginations and family life. The same will be true for Easter and its octave as well as Pentecost and its octave (wherever Catholics retain their tradition). In all these cases, we have so many reasons to take the extra step of making the feasts evident, merry, and memorable. And we need not be embarrassed if we find ourselves cut off from ancestral family customs and needing to “rediscover” and even, to an extent, “reinvent” the holidays; that is the condition of most modern Westerners, to one degree or another.

We should humbly accept that we have work to do, and then get to work, one step at a time, with some of the fantastic resources now available to us: Mary Reed Newland’s The Year & Our Children: Catholic Family Celebrations for Every Season; Kendra Tierney’s The Catholic All Year Compendium; Maria von Trapp’s Around the Year with the Von Trapp Family; and several others like these. Try introducing one thing each year for a special season or a special feast day that you haven’t done before, and if it works well, keep it going the next year. Add as you can manage it (it gets easier as the older kids can help out). After some time, you will have in your family those Christmas, Easter, and Pentecost customs that you wish you had growing up.