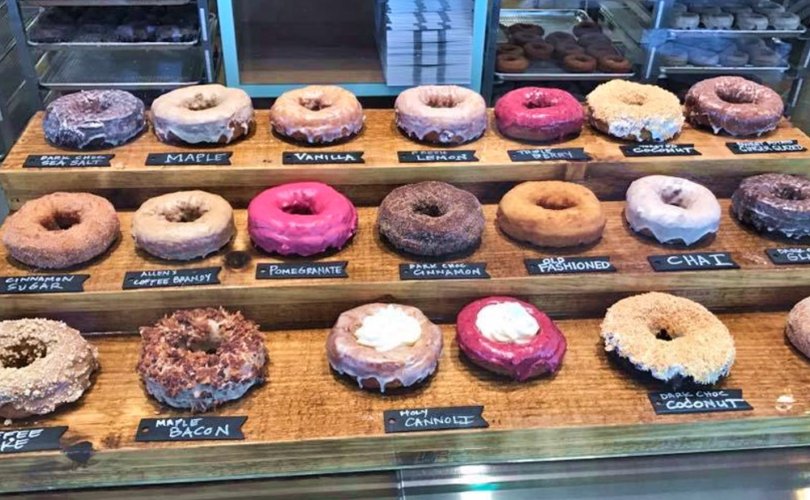 December 18, 2017 (LifeSiteNews) – It seems that no good deed goes unpunished when LGBT social justice warriors (SJW) get involved, this time condemning a donut shop for using an organization they despise for helping the shop to locate a needy family for charitable giving at Christmastime.

Earlier this month a favorite doughnut shop in Portland, Maine, wanted to help out a local family of modest means during the Christmas Season.

“In a now-deleted Facebook post, the shop detailed how it was collecting warm clothes for a family with five children and two adults, and asked customers to donate hats, mittens, and sweaters in exchange for free doughnuts or T-shirts,” reported Christian News Service (CNS).

But “The Holy Donut” innocently and unknowingly stepped on a Yuletide landmine when it let it slip that they had reached out to The Salvation Army for help in identifying a poor family the shop could help.

The problem? Gays have, for many years, deemed The Salvation Army a bitter enemy because it views the venerable organization as having resisted LGBT ideology and demands.

The backlash from the LGBT world was swift and vicious.

Overnight, the bakeshop went from famous to infamous as homosexuals and their SJW allies launched an all-out social media campaign to punish the modest small business for working with an organization they disapproved of.

Soon, “the shop's Facebook page was littered with hundreds of comments, including many that accused The Salvation Army of discrimination after it posted about the fundraiser,” reported CNS.

The quick assault was so fierce, Rev. Franklin Graham called it a “Blitzkrieg.”

“This attack is no surprise,” he said.

“The LGBT activists have the support of Hollywood, rock stars, higher education, big business, much of the judiciary, and many left-wing government officials. Now that LGBT activists have this voice, their newly gained power is used to oppress and silence those who sincerely believe in biblical or traditional marriage,” he added.

The Holy Donut team was bowled over by the outrage they experienced and thought an apology was the best way to proceed.

In a now-deleted Facebook posting, the donut shop wrote that it  “made several oversights and mistakes” and “did a poor job in doing our due diligence in choosing the vehicle to help a needy family and we only made matters worse in the way we handled the aftermath once we were made aware of the polarizing controversy surrounding the Salvation Army.”

In the same deleted Facebook posting, the management of the bakeshop explained, “We do not support The Salvation Army or consider them our ‘partner’ for this project, they simply linked us to a needy family.”

Graham said that LGBT oppression against anyone who dissents from their agenda is evident nationwide.

“Just look at the bakers, florists, videographers, and photographers that have exited the wedding business, experienced death threats, and face public shaming for simply not participating in a gay wedding,” he said.

“Pray that our country will see through this spiritual blindness, and pray that Christians will have boldness to stand by the Word of God even if jobs, or promotions, or reputations are threatened. Rights of conscience, religious liberty, free expression and obedience to God’s Word are worth it,” he added.

Graham is himself currently the target of a SJW attack by members of Britain’s  Parliament, who want to prevent the evangelist from entering the country next year to conduct a evangelistic crusade as his father did years ago.