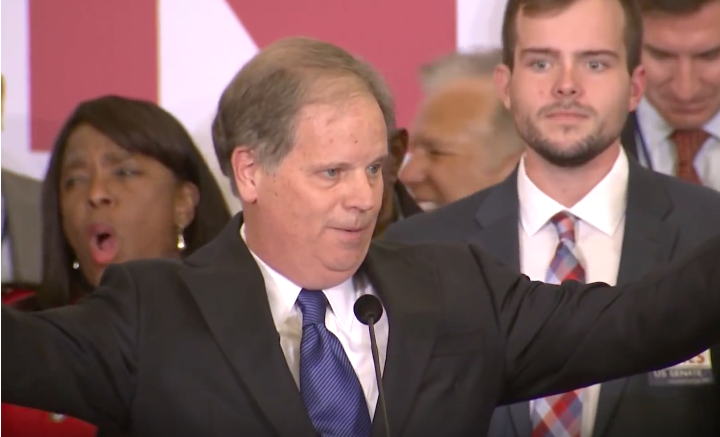 BIRMINGHAM, Alabama, December 14, 2017 (LifeSiteNews) – If Democrat Doug Jones' stunning win of the Alabama special election teaches anything, it's that Republicans will cease to win races until they address billionaire outside influences such as George Soros. Outside American wealth is turning whole states from Republican to Democrat, from pro-life to pro-abortion.

In the wake of the red state’s special Senate election, losing conservatives are waking up to the reality that it's George Soros and other non-Alabamians who really won the Alabama Senate election.

Those in politics know money wins elections.  It’s sad but true, like the old adage, “Sex Sells.” Those with larger political “war” chests can take out more ads, generate more image-making machinery (both positive for them and negative for their opponent), and sway uncommitted voters.

In that sense, there’s no question that George Soros’ money gained both votes in favor of Doug Jones (including write-ins) and non-votes against Roy Moore.

Alabama Republicans hadn’t lost a senate seat in 25 years. Moore was the overwhelming favorite, beating his primary opponent Luther Strange in a landslide.  Even after two allegations of 40-year-old sexual harassment conveniently surfaced just weeks before the election, Moore was still polling ahead.

The Republican National Committee disavowed him and leaders of his own party told him to quit, but Moore still showed the clear frontrunner.  It seemed Alabama voters were looking to issues over media-generated image, and followed the Constitution regarding presumed innocence.

Aside from the fact that Jones repeatedly distanced himself from the Democratic establishment and assured voters that he would not be the party lapdog as predicted –all the while receiving vast sums of money from the very party he claimed independence from, the Jones benefactors were led by billionaire George Soros as well as other Democrat palm-greasers.

“Highway 31,” named after a road cutting Alabama in half, blew over $2.1 million for Jones in the first ten days of December alone, largely on TV commercials, social media ads, and direct snail mail.  The out-of-state alliance outspent Moore’s biggest supporter 4-to-1.

With its millions, “Highway 31” created and bought time for ads smearing Moore with long-disproved accusations, such as the slander that he was “actually banned from the Gadsden Mall … for soliciting sex from young girls.”

A Jones flyer showed an African-American man and asked, “Think if a black man went after high school girls anyone would try to make him a senator?”  The ad was condemned as “racist.”

On cue, the media instructed voters that the pro-life movement would be destroyed if they voted for Moore.  And self-designated “‘pro-life’ voters” were featured for saying they would vote for pro-abortion Jones.

Some went so far as to ascribe the election’s outcome to the mainstream media.  Conservative talk show host Dale Jackson observed that the election has become a battle between Moore and the media, while Washingtonian writer Elaina Plott boasted that the election proves “the media is a credible opponent.”

American newspaper and television monopolies played their part, too.  Alabama’s three biggest newspapers, as well as AL.com, are operated by the Alabama Media Group, and all came out in the strongest terms against Moore.

Outside politicians also stumped for Jones, such as Georgia Rep. John Lewis, New Jersey Sen. Cory Booker, who lobbied hard for black voters.  Celebrities like Charles Barkley urged the same, and black voters responded by overwhelmingly supporting Jones.  CNN reported that a full 30% of voters were African American –more than in either Obama presidential elections in 2008 and 2012.

Additionally, Soros’ and other donors’ money was being used to register convicted felons to vote for Jones.  Alabama law requires an ID to vote.  Even though the law accepts any one of ten means of identification, Democrats call the ID law, “voter suppression.”

Jones himself participated in the Soros-funded Brennan Center push for voting rights for murderers, rapists, and other felons, Breitbart revealed.

The result of all this funding was a massive imbalance in voter turnout.  Among Republicans, only half who voted last year voted on this special ballot.  Among Jones voters, however, a seemingly impossible 92 percent of last year’s numbers came out to vote in this off-year, separate, one-issue-only election.

Many social media commenters cried foul.  Among the tweets:

“Unless we start addressing voter fraud on the left and billionaire outside influences such as George Soros, the Republicans will not win. This is serious folks. 92% of democrats voted in Alabama for senate that’s more than when Obama or Hillary ran.  It reeks fraud.”

Unless we start addressing voter fraud on the left and billionaire outside influences such as George Soros the Republicans will not win. This is serious folks. 92% of democrats voted in Alabama for senate that's more than when Obama or Hillary ran. It reeks fraud

“Notice almost every county on the border with Mississippi voted for Jones when many of them voted for Trump in ‘16.  Seems strange to me!  We need to have this investigated.”

Notice almost every county on the border with Mississippi voted for Jones when many of them voted for Trump in '16. Seems strange to me! We need to have this investigated

Some conservatives are blaming establishment Republicans for Moore’s defeat.  “At the first sign of an unproven 40-year old allegation of sexual misconduct against Moore in the waning weeks of the campaign, the GOP halted financial support for Moore’s campaign, and several Republicans withdrew their endorsements, when they should have maintained their support in the face of such obviously fake allegations,” Operation Rescue President Tony Newman said.  “Instead, they allowed Moore to be tarred and feathered by the spurious attacks.”

Furthermore, Newman blames Senate Majority Leader Mitch McConnell for not only opposing Moore but announcing that even if Moore won, he would immediately be investigated for the two allegations of sexual harassment.

“This sent a strong message … that Moore would never be accepted as a legitimate Senator,” Newman charged.  “It is my opinion that Sen. Mitch McConnell heavily contributed to Moore’s defeat.”

“McConnell has ensured that pro-life legislation will never pass, Planned Parenthood will never be defunded, and babies that can feel pain will continue to be aborted after the mid-point of pregnancy,” Newman lamented.  “He has betrayed the will of the American people, who support the Trump agenda, especially when it comes to ending abortion. Sen. McConnell, please resign!”

With the vote so close (49.9% to 48.4%) and the voting demographics so suspect, Moore followed supporters’ urgings to hold off on conceding the race.  “When the vote is this close, it’s not over,” Moore said after CNN called the election for Jones.  “We have to wait on God and let this process play out.”