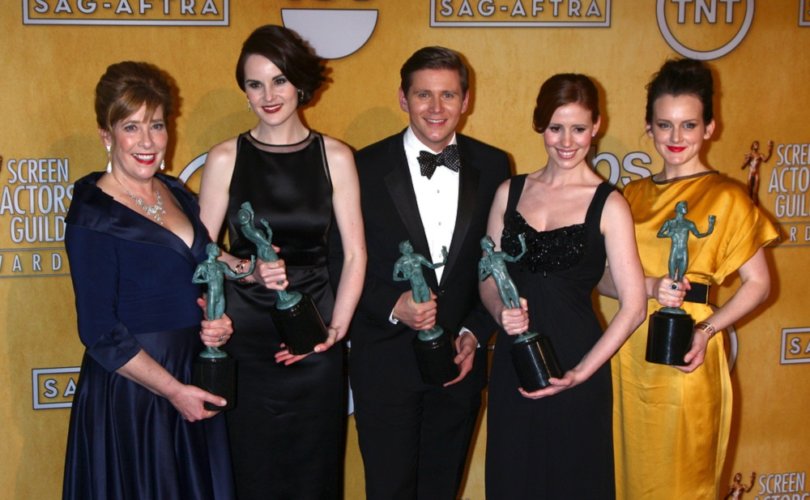 September 6, 2019 (LifeSiteNews) — Every so often, a pop culture phenomenon reminds us just how thoroughly we have abandoned our Judeo-Christian heritage in the year of our Lord 2019. The latest example is an upcoming Downton Abbey film, a cinematic accompaniment to the wildly popular six-season period drama that followed the lives of the Crawley family and their assortment of servants in a magnificent Edwardian manor around the turn of the last century. Since the trailer was released, my Twitter feed has become littered with breathless news stories about a prominently featured gay kiss and speculations about the potential of a same-sex romantic storyline, many of them published by once prestigious news organizations.

This is nothing new, of course. Most TV shows and films now feature gay characters, and the LGBT lobby painstakingly takes note of these things and targets those film companies (like Disney, which GLAAD gave a “failing grade” on LGBT issues as recently as March despite Disney’s recent efforts) that are being too subtle in their attempts to mainstream the LGBT agenda. But the creators and producers of Downton Abbey have consistently gone the extra mile in their attempts to appease, kicking the series off with a same-sex kissing scene in the very first episode of the first season. The film trailer indicates that they intend to continue this track record, and LGBT activists are pleased with this state of affairs.

There is another aspect to all of this. Many fans of Downton Abbey noticed — I read about this first in Mary Eberstadt’s brilliant book It’s Dangerous to Believe — that Christianity was virtually absent in a period drama about a period where Christianity was still prevalent. As it turned out, the show’s historical adviser, Alastair Bruce, has revealed that this was intentional. According to the Telegraph, Bruce was explicitly told to “leave religion out of it.” Even the smallest references to religion were banned. In fact, the show’s producers refused to allow Bruce to have napkins folded in the shape of a bishop’s mitre on the tables, as even that religious reference was apparently too much for the show’s audience, which was clearly presumed to be emphatically post-Christian.

That is why, Bruce explained, the show never depicts the Crawley family sitting down for dinner — because historical accuracy would compel the producers to show them saying grace before they ate. “In essence you hardly ever see a table that isn’t already sat at,” Bruce explained. “We never see the beginning of a luncheon or a dinner, because no one was ever allowed to see a grace being said, and I would never allow them to sit down without having said grace[.] … I suggested a Latin grace, but they decided that was too far, and no one would’ve known what was going on.”

Of course, it was impossible to keep all religious references entirely out of the show—although Bruce, who took such a large role in the show’s making he’s been profiled on both sides of the Atlantic, says the title of the show was even discussed at length for fear the term “abbey” was too religious—and holidays such as Christmas, weddings, christenings in church, and several other references ended up being included. These references, however, were introduced with caution and reticence (except for Christmas, which is no longer seen as exclusively Christian territory)—attitudes which did not apply to starting the show off with a scene of passionate same-sex kissing and groping.

Consider that for a moment: a TV show that kicked off with a romantic scene between two men felt that showing a family saying grace “was too far” and too inappropriate for audiences. What a profound statement about our culture’s plunge: prayers are now considered virtually obscene, while behaviors that would have been considered biblically immoral a very short time ago are front, centre, and celebrated. Sexual behavior can be depicted — even explicitly — without qualm, but TV audiences have to be shielded from something that was once an almost universal practice: praying before meals.

Now, I am someone of the unpopular opinion that the entertainment industry is morally bankrupt and intentionally poisonous, and that we should not be allowing anti-Christian storytellers who despise our beliefs have access to our families. But sometimes, pop culture serves as a helpful barometer for how far we’ve come — and the storytellers of today’s entertainment industry hate Christianity so fervently that they actively attempt to rewrite history to avoid allowing even a flicker of truth to contaminate the celebrations of sexual liberation they offer to their willing audiences.

Jonathon’s new podcast, The Van Maren Show, is dedicated to telling the stories of the pro-life and pro-family movement. In his latest episode, he interviews Alessandra Bocchi, a journalist who just returned from Hong Kong, where she was reporting on the protests. You can subscribe here and listen to the episode below: