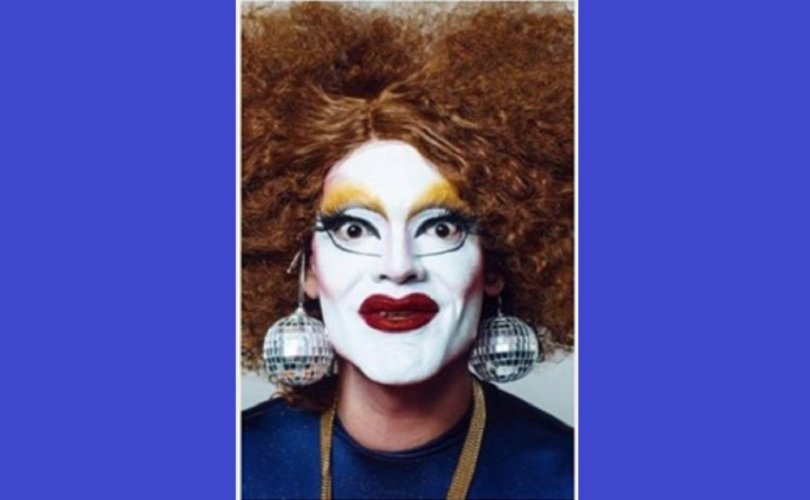 PORTLAND, Oregon, September 10, 2019 (LifeSiteNews) — The drag queen who was shown in multiple disturbing photos to have frolicked on the floor with young children crawling over him at a Drag Queen Story Hour blames those children for the backlash he experienced.

LifeSiteNews first brought photo evidence of children having inappropriate contact with drag queen Carla Rossi at Portland, Oregon’s St. John’s Library to the attention of the public in July. The photos, which had been posted on the Multnomah County Library’s own Flickr account in October 2018, were quickly removed after the LifeSiteNews report went viral.

Drag queen Rossi, who last year said the kids were climbing on top of him after a dance move called a “death drop,” changed his tune after receiving criticism, saying the kids knocked him over as he tried to fight them off. He also blames his bad hip and the six-inch heels he was wearing at the time.

In an October 2018 Instagram posting in which he was pictured with a little girl lying on top of him, he said, “Drag Queen Storytime yesterday ended with a death drop on a bubble wrap dance floor as the babies crawled all over Carla Gulliver’s Travels–style, and I have the best job in the world.”

Shortly after LifeSiteNews drew attention to the troubling scene in the Portland library,  Rossi’s gleeful tune changed. In a subsequent Instagram post, he said he didn’t so much want to “set the record straight” as “break it altogether.”

“The photographed kids knocked me over and piled on me, and I laughed with them and their parents and the library director and told them we had to get up as I tried to look out for my bad hip in the process,” said Rossi.

“What would you do differently if kids having a Cher dance party — on bubble wrap — knocked you over in six-inch heels and a floor length rainbow caftan?” he asked.

I’m going to be honest: I’m having a hard time. I can talk about resilience and perseverance and community responsibility as a public person — and I might try to be strong as steel, but no matter how much I want to be steel I’m just human, and right now that human is really sad and really hurt. Every time I’m tagged (please refrain from doing so) or make the mistake of searching my name I find thousands of conservative hate sites and commenters all calling me a child abuser if not something somehow worse. People who know nothing about me or my work or my achievements. Even when strangers on the Internet claim to reserve judgement for a “lifestyle” or don’t stoop to immediate “disgust” and homo/trans-phobia they still gossip and debate over what I thought was once an adorable photo of kids having fun being little monsters. I’m not here to set the record straight as much as break it altogether — if you need to know (as did my cousins who I saw on the Internet talking about me and drawing their own conclusions from these photos, which kind of signified my breaking point and hurt just as much if not more than the thousands of strangers already demonizing me), the photographed kids knocked me over and piled on me, and I laughed with them and their (also photographed) parents and the library director and told them we had to get up as I tried to look out for my bad hip in the process. What would you do differently if kids having a Cher dance party — on bubble wrap — knocked you over in six-inch heels and a floor length rainbow caftan? To speak simply, the re-presentation of this as “child abuse” and calling me a predator and a pedophile is rooted only in fear and homophobia. Now let’s be very honest: this outrage isn’t over “child abuse,” this is about the simple reality of queer people and children being in the same room, and at Drag Queen Storytimes across the country hateful cowards find ANYTHING (previous videos of drag numbers by the queens, images like these) to justify their hate speech without coming out as outright bigots up front… [CONTINUED IN COMMENTS]

Yet the pictures of the kids with Rossi don’t seem to show the drag queen struggling to get the kids off him. On the contrary, each one looks as if the kids and Rossi were posing for the camera.

Billed as a “Teen Drag Workshop,” an announcement on the Multnomah County Library website speaks of “the vast abyss of drag and its potential” and “the unchartable spectrum of genders and sexuality.”

The event also promises to recount drag’s “legendary elders, artists, and ancestors, from Two-Spirits (and other-gender shamans of the pre-settler North American continent) and the Sisters of Perpetual Indulgence to Marsha P. Johnson, Leigh Bowery, Elvira, RuPaul, and Christeene.”

(Note: The photos of the kids on the floor with drag queen Rossi can be found here. WARNING: Link leads to images of child abuse.)