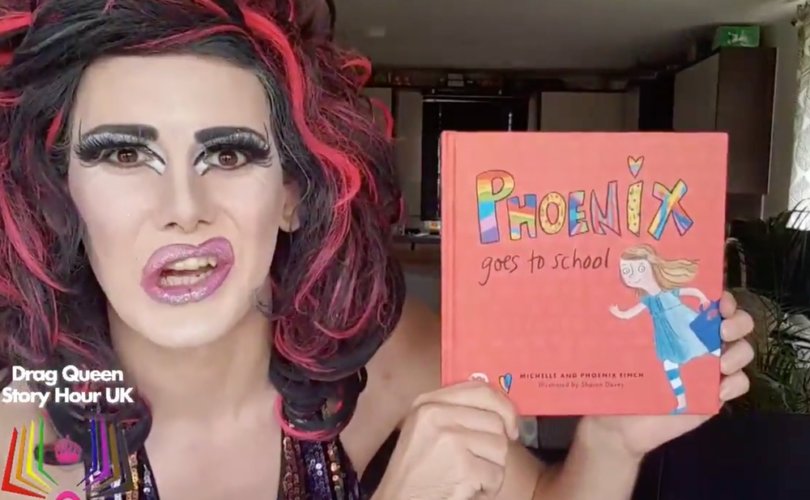 August 14, 2020 (LifeSiteNews) – We have been told for several years now that drag queens, at least in the context of teaching and reading stories to little children, are asexual, happy-go-lucky performers providing a service to kids, much like folks in medieval costume reading stories about knights and castles. This is only believable if you really want to believe it, but it has also inoculated Drag Queen Story Hour from a series of scandals, from the discovery that one performer had previously assaulted an 8-year-old boy; to a performer (possibly unintentionally) flashing a room full of children; to drag troupes also moonlighting as obscene sexual performers. More than one performer has been exposed as a child sex offender.

None of that generally matters because those who claim Drag Queen Story Hour has nothing to do with promoting the LGBT agenda and sexuality in general are lying, and most of them know it. But I’ll be interested to know if the defenders of this practice will respond to a new scandal—an “accidental” tweet from the Twitter account of the UK Drag Queen Story Hour, which was locked after a wave of outrage from users after they posted a picture with a pro-pedophilia message. The tweet contained a photo of a smiling man wearing a rainbow suit and wielding a rainbow umbrella with the phrase “Love has no age!”

Before people start defending the tweet as innocent, UK Drag Queen Storytime promptly deleted it a short time later as people started to point out the phrase, which is frequently used by pedophiles (a riff on “love has no gender”) who are attempting to rebrand as “MAPs” or “minor-attracted persons.”  Last year Snapchat released a “Love Has No Age” filter for “pride” month and promptly pulled it again after similar backlash. UK Drag Queen Storytime has locked down its Twitter account and deleted the tweet, but one enterprising social media user captured a screenshot of it before they could send it down the memory hole entirely.

For those who might claim that it is incendiary and slanderous to point out that the phrase “love has no age” has pedophilic associations, it must be pointed out that the British-run Paedophile Information Exchange (known colloquially as PIE), which operated between 1974 and 1984, campaigned to lower the age of consent using the slogan “no age limit on love.” When that phrase cropped up in an ill-advised ad campaign from a supermarket giant in the United Kingdom, it sparked outrage and made headlines precisely because the association of that phrase with pedophilia is well-known and widely accepted.

This is simply to point out that those who would like to write this off as a smear campaign leveled against Drag Queen Storytime are once again defending a practice that has sexual performers reading to children despite the various scandals that have been associated with the practice. Who tweeted out a slogan used by pedophiles in the UK to push for access to younger and younger people? Why did they tweet out that slogan, considering the fact that the implications of it are well-known? The fact that it was deleted so swiftly and the account locked indicates that they realize they have made a mistake. But what possessed them to send out the statement in the first place?

If Drag Queen Story Hour were a church-run organization, you can be assured that the media would be all over the story—and rightfully so. But because we must all play along with the fiction that allowing drag queens to read stories to small children is inoffensive and sweet, we must also pretend that it is not at all concerning that an organization that markets itself to children tweeted out that “Love has no age!”