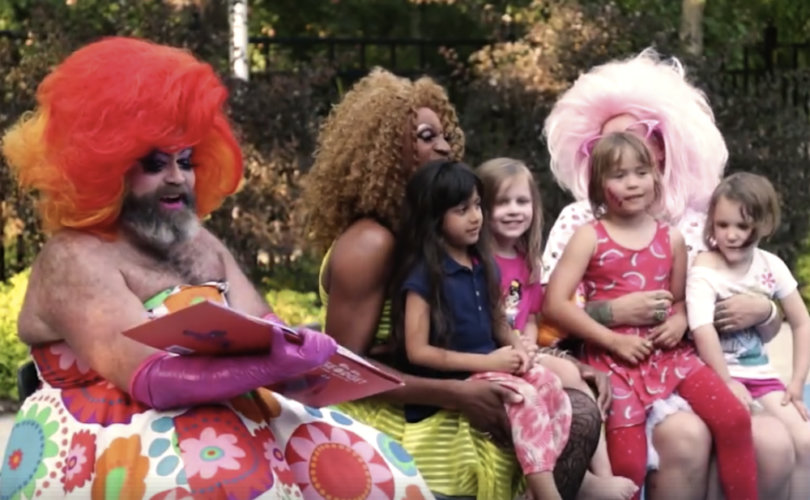 Kane told nowtoronto.com, “The younger we get these little kids embracing people’s identities, ethnicities and family dynamics, the more they are exposed to the fact that this is just another form of life.”

In a video posted by Today’s Parent, Kane says, “When you think about it, really, bringing drag performers together with little kids — it’s kind of a perfect relationship.  … Drag performers are clowns, right? They play things up. They’re over the top. They’re like a cartoon come to life.”

It is hard to imagine, however, that hairy, hefty, bearded, middle-aged drag queens with enormous hairdos and other exaggerated features are not scary to young kids.

Kane admits that he hopes to turn the children that he and other drag queens address into evangelists for the cause of transgenderism and other non-binary forms of self-definition. “The grassroots aspect of what this is is that you’re giving these little morsels of stuff to these kids who are really honestly some of the most powerful teachers who are out there in the world.”

“So I’m hoping that it’s like dropping a stone in the pond, and then it just ripples out,” says the middle-aged drag performer.

According to the Drag Queen Story Hour (DQSH) website, “DQSH captures the imagination and play of the gender fluidity of childhood and gives kids glamorous, positive, and unabashedly queer role models. In spaces like this, kids are able to see people who defy rigid gender restrictions and imagine a world where people can present as they wish, where dressup is real.”

Drag Queen Story Hour (DQSH) was started in San Francisco by author Michelle Tea, whose writings concern various areas, including queer culture and feminism. Tea also founded RADAR Productions, a platform for emerging queer artists, according to its website information. The San Francisco DQSHs are managed through the organization.

Who wants to be a drag queen when they grow up?

DQSH has a quote from the Brooklyn Public Library’s Director of Youth and Family Services on its “About” webpage endorsing its program: “Drag Queen Story Hour is a fun and important program that celebrates diversity in the way that children may dress and act,” Judy Zuckerman states. “It encourages children to look beyond gender stereotypes and embrace unfettered exploration of self.

In June, the Boston Public Library hosted the “Sisters of Perpetual Indulgence,” men in drag dressed mockingly as Catholic nuns, for DQSH.

Believing that guilt “chains the human spirit,” the group advocates that every person do whatever their passions dictate. It uses Christian terms and contorts them to mock the sacraments and church life in general, such as “Sister Inferior” and “Sister Hysterectoria.”

The men call themselves “queer nuns,” even though the anti-Catholic group is openly devoted to promiscuity. Their slogan is a ridicule of Jesus’ words to the woman caught in sexual sin. Instead of “Go and sin no more,” the men “queers” have created their trademark slogan as “Go forth and sin some more!”

The Boston Public Library not only championed the queer group but promoted their brand of anti-Christian bigotry to the youngest of impressionable children.