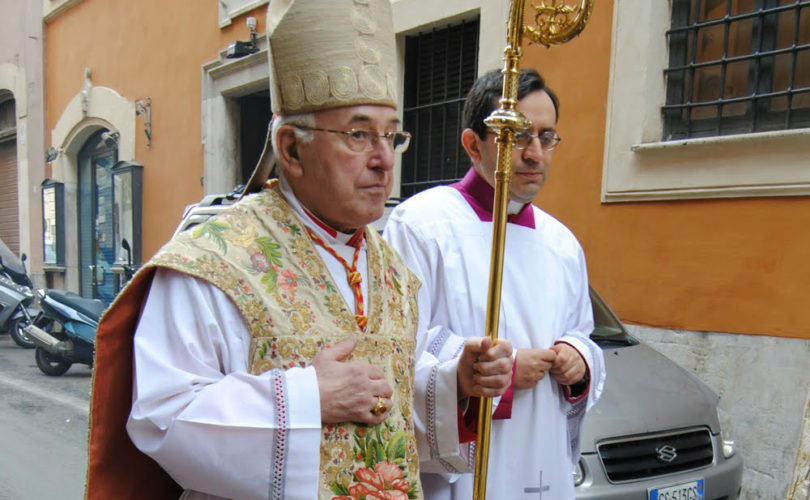 July 29, 2021 (LifeSiteNews) – Cardinal Walter Brandmüller, one of the two remaining dubia cardinals, has issued a statement criticizing Pope Francis’s motu proprio Traditionis custodes essentially abrogating the traditional Latin Mass. This cardinal sees that the Pope has unleashed a “hurricane” and proposes the idea that there are indeed laws that, when heavily opposed or ignored, never effectively become law. He gives an example from Church history of such a law being effectively ignored and invites Catholics who are indignant about this new motu proprio to remain calm and to have patience.

While Cardinal Brandmüller is right in calling upon us Catholics to retain a charitable language and preserve patience, other voices air concern that Pope Francis might actually implement this new law very forcefully, with the help of Cardinal Braz de Aviz, under whose authority the Franciscans of the Immaculate – a fairly young order that more and more grew in its attachment to Tradition – have essentially been destroyed in their original charism. LifeSite will soon have a report on these warning voices. In addition, we also see prominent cases of the Old Mass being suppressed. One such case is the archbishop of Washington, D.C. has already cancelled the planned celebration of a Traditional Latin Mass by a former nuncio, Archbishop Thomas Gullickson, at the National Shrine in D.C. in August 2021.

So far, Pope Francis has always implemented his own agenda, even at the highly controversial synods on the family, at the end of which he got a final document that helped him to write Amoris Laetitia, ruling that some divorced and “remarried” couples may have access to Holy Communion. This was the very document that provoked the four dubia cardinals – Cardinal Raymond L. Burke, Carlo Caffarra, Walter Brandmüller, and Joachim Meisner – to issue their dubia (doubts).

May Cardinal Brandmüller's hope turn out to be true – that this new motu proprio is going to be essentially ignored and thereby turned ineffective – but at the same time, may we remain vigilant.

Below is the full statement by Cardinal Brandmüller.

“Traditionis custodes” considered in the clear light of the day

With his motu proprio Traditionis custodes, Pope Francis has virtually unleashed a hurricane that has infuriated those Catholics who feel attached to the “Tridentine” rite of the Mass revived by Benedict XVI's Summorum Pontificum.

From now on – according to the essential message of Traditionis custodes – Benedict's Summorum Pontificum will be largely abrogated and the celebration of the Holy Mass will be permitted only according to Paul VI's Missal, with certain exceptions.

A glance at the blogger world and other media reveals how worldwide protest has erupted against the document, which is unusual in form and content.

If the discussion about Traditionis custodes has so far been about the legislative content of the motu proprio, it will be considered here from a formal point of view as a legal text.

First of all, it should be noted that a law, in order to acquire binding force, does not require any special acceptance by the parties concerned.

But it does require reception by them. By reception is meant the affirmative acceptance of the law in the sense of “making it one’s own.” Just by this – and only with this – the law attains confirmation and permanence, as already the “father” of canon law, Gratian († 1140) taught in his famous Decretum. Here is the original text:

This means, however, that for a law to be valid and binding, it requires the approval of those to whom it is addressed. Thus, on the other hand, some laws today are abolished by non-observance, just as, on the contrary, laws are confirmed by the fact that those concerned observe them.

In this context, reference may also be made to the possibility given by customary law, according to which a justified objection against a universal church law has at least initially a suspensive effect. This means, however, that the law is not to be obeyed as long as the objection has not been resolved.

It should also be remembered that in case of doubt as to whether a law is binding, it is not binding. Such doubts could be caused, for example, by inadequate wording of the text of the law.

Here it becomes clear that laws and the community for which they are enacted are related to each other in a quasi-organic way, insofar as the bonum commune of the community is their goal.

In plain language, however, this means that the validity of a law ultimately depends on the consent of those affected by it. The law has to serve the good of the community – and not vice versa the community the law.

The two are not mutually opposed but mutually related entities, neither of which can exist without or against the other.

If, therefore, a law is not or no longer observed from the beginning or in the course of time, it loses its obligatory force, becomes obsolete.

This – and it must be emphasized emphatically – is of course true only of purely ecclesiastical laws, and in no case of those based on divine or natural law.

As an example of a lex mere ecclesiastica may serve the Apostolic Constitution Veterum sapientia of Pope John XXIII of February 22, 1962, with which the Pope, among other things, prescribed Latin for the teaching at universities.

Young doctor that I then was, I only reacted with shaking my head. Well, at the “Gregoriana” in Rome Latin was customary, and that made good sense in view of the language babel among the student body coming from all continents. But whether Cicero, Virgil, and Lactancius would have understood the lectures may well be doubted. And now: church history, even of modern times, in Latin? With all the professed love for the language of the Romans – how could that work?

And that is how it remained. Veterum sapientia, hardly printed, was soon forgotten. But what this inglorious end of an Apostolic Constitution meant for the reputation of papal authority became apparent only five years later, when Paul VI's encyclical Humanae vitae was almost drowned in the protests of the Western world.

Be slow, then, friends, and have patience. Never has unenlightened zeal served peace, the common good. It was St. John Henry Newman who, quoting the great Augustine, reminded us: “Securus iudicat orbis terrarum.” In the meantime, let us pay careful attention to our language. “Verbal disarmament” has been called this before. In more pious words: No violation of brotherly (and recently – sisterly) love!

Now – serious again: What a grotesque idea that just the mystery of love would become the bone of contention. Again, let us quote St. Augustine, who called the Holy Eucharist the bond of love and peace that encloses the head and members of the Church. It would be no greater triumph of hell if this bond were to be torn again, as it has been many times before. And the world would scoff, “See how they love one another!”

Please see here a translation of the extended quote from Gratian: