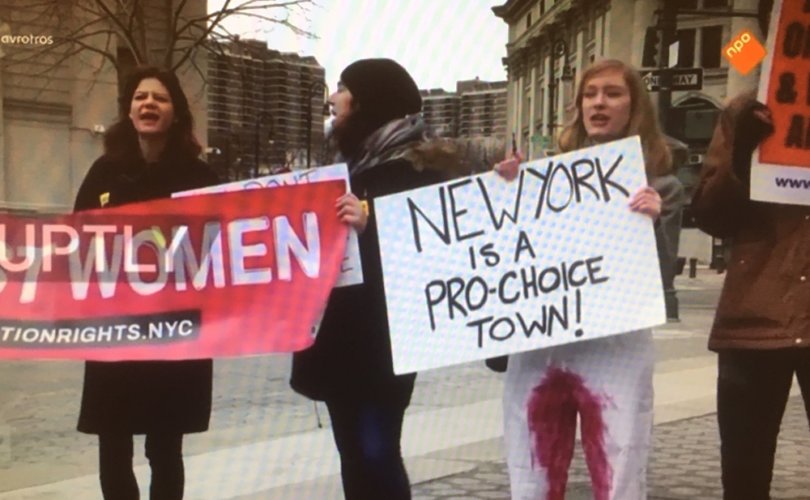 February 1, 2019 (LifeSiteNews) – Nearly every pro-life activist has discovered that when it comes to the mainstream media, we can expect to be lied about.

There have been dozens of examples: the Covington Catholic School boys, fake hate crimes perpetrated against abortion activists by themselves, and the refusal to cover violence against pro-life activists. In each instance, the media has intentionally attempted to smear pro-lifers, lie to the public, and trump up support for their ideological allies in the abortion wars.

In fact, in Canada the media has consistently attempted to drum up support for “bubble zones” around abortion clinics in several provinces by publishing claims describing hordes of anti-abortion harassers disturbing the peace—but failed to provide a single example of this harassment.

In the Netherlands, the pro-life movement has been growing in strength for quite some time, while the Dutch abortion industry has been rocked by scandals and revelations of financial fraud amounting to millions of euros. In response, the media has come to the aid of their friends in the abortion industry, and fallen back on a tactic that pro-lifers in North America have experienced many times: An attempt to use a hidden-camera investigation to “expose” pro-lifers in some fashion. In nearly every instance, the journalists collecting such footage are forced to pretend that the information they have gathered is in some way newsworthy, when in reality these investigations nearly always prove something that everyone already knows: Pro-lifers are opposed to abortion.

I contacted pro-life activist Chris Develing, the communications director for the Dutch pro-life organization Cry for Life, to find details about the smears being faced by pro-lifers in the Netherlands at present. This is our conversation:

LifeSiteNews (LSN): What is the situation in the Netherlands right now?

Chris Develing: We have watchers (sidewalk counselors) in multiple cities who stand outside abortion centers to pray and talk to the women who go inside. On average they save about one child every two weeks, often through our sponsor plan which can provide a woman with financial and/or mental support.

Obviously, the abortion centers and their political affiliates are not happy about the volunteers. So they took a few months to collect anecdotal “evidence” that would incriminate them. In our country the media is predominantly left-leaning, so they were quick to find a TV program called ‘OneToday’ (translated) that would help them out. They sent an actress with a hidden camera to record what our watchers tell these women. They combined that with the anecdotes about the so-called harassment, then attached our name to all of this and used it to call on politicians to set a buffer zone between the centers and our watchers.

LSN: Why is the Dutch pro-life movement being attacked?

Develing: We stand for both the women and their unborn children. Because we care for them, we continuously call for recognition of the dangers and immorality of abortion. We are also advocates for full information for women, so they can make their choice while taking into consideration all risks and alternatives.

The dominant pro-choice side attacks everything we say or do, and this is just a new episode. As in America and Canada, the propaganda in The Netherlands has, for the past 4 decades, led to a long-standing caricature of the pro-life movement. Because of this, we are silenced and alienated by many sides.

LSN: How have the facts been misrepresented?

Develing: The facts were misrepresented in a number of ways. Before broadcast they asked us for a written response to the allegations. This response never made it into the TV report, after which they said our response could be found on their website. And even that wasn’t true for the first few days, until the news was no longer topical. (Segment begins in video below at 18:42)

They also claimed that our watchers have harassed women in a variety of ways–all of which was never substantiated by a police report or other real evidence. Some of their claims, about people banging on car windows and following women into the centers, supposedly happened on locations where our people do not even hold watch.

As stated before, they also took hidden camera footage of our watchers in one location, Utrecht. In the heavily edited footage our volunteers never live up to the legend of “aggressive protesters” as they are labeled in the very same report. We see gentle, Christian people, talking to a young lady about what abortion does and that there are ways they can help her keep the baby. Even the ominous movie score which was edited into the footage couldn’t create their desired outcome.

So they had to be even more creative and boy did they try. They also visited the same watchers with a regular TV crew, asking them for interviews. The watchers obliged and answered them calmly and kindly. One of our volunteers was asked to show the cameraman his booklet. The voice-over then says that he’s showing the camera “highly explicit pictures.” But as is plain for everyone to see, he’s actually showing normal pictures of healthy, living fetuses. In fact, some of them are pictures by the world-famous Swedish photographer Lennart Nilsson.

As you can imagine, things weren’t working out with the narrative that the center’s visitors were “continuously being harassed by aggressive anti-abortion protesters.” Since they had no footage of anything remotely resembling such a scene, they had the illuminating idea to build their case from a foreign country. The voice-over expressed the center’s concerns that the anti-abortion protesters were becoming “increasingly aggressive” and that this is copied from the American pro-life movement. At this point, footage of an American protest appeared. And indeed, it was a pretty vulgar scene, with lots of blood and screaming–exactly what they needed for the stimulation of their viewer’s outrage. One problem: it was a pro-choice protest by wildly inappropriately-behaving feminists, covered in blood-red paint. Some of their signs said: “Pro-life, that’s a lie!” which proves an important lesson: always read all four words on protester signs.

Of course this blunder, or rather this accidental moment of truth in their report, was more than just a little mistake. I say it accidentally unfolded a web of hypocrisy. Because rectifying the claim that these were pro-life protesters is one thing, but they can’t take back their judgment of that particular method of protesting. The very people they are protecting are now judged by them, by mistake. Of course, hardly anyone noticed the mistake. Even I didn’t spot it until a colleague told me about it. It’s alarming how quickly we trust the pictures that are placed before us. If the reporters tell you they are pro-lifers, we assume they are.

LSN: What does the Dutch pro-life movement actually do?

Develing: I will only speak for our foundation, Schreeuw om Leven (Scream for Life). Basically, we challenge the pro-choice culture in all areas. We provide a helpline for women who are thinking about abortion and need help. We can provide them with financial and or mental support in hopes of taking away any reason they may have to choose abortion. Our helpline team invites women to our pregnancy center for counseling, but we also help them by communicating over the telephone and e-mail. In the advocacy department we try to be involved in the public debate on abortion. Six times a year we create our own magazine (about 26,000 subscribers), containing lots of testimonies of people who have suffered from abortion or who decided to keep their baby, sometimes with our help. The fact that we have these results are a clear testimony to the fact that our government is not succeeding in getting to the bottom of what women need. If they did, we wouldn’t have a job. So we try to speak to politicians when we can in order to stimulate them to spread our pro-women, pro-unborn, pro-life message.

LSN: What do people need to know about this story?

People need to know that the Dutch media is often influenced by organized feminism and Humanism, who find the Dutch abortion laws way too restrictive. Even though it’s the most “progressive” abortion law in Europe, since almost all countries that allow abortion do so up to 12 weeks. In our country this limit is placed at 24 weeks.

This latest attack by the media is just another episode in which we were not heard as the accused party in this extremely one-sided and unfounded range of claims about our organization. No mention was made of the babies we save or the women we help. At the same time, they found no evidence for their claims, so they created an atmosphere of indictment in order to sway public opinion once more. Their short-term goal: get buffer zones between our watchers (who they persistently call demonstrators) and the abortion centers.