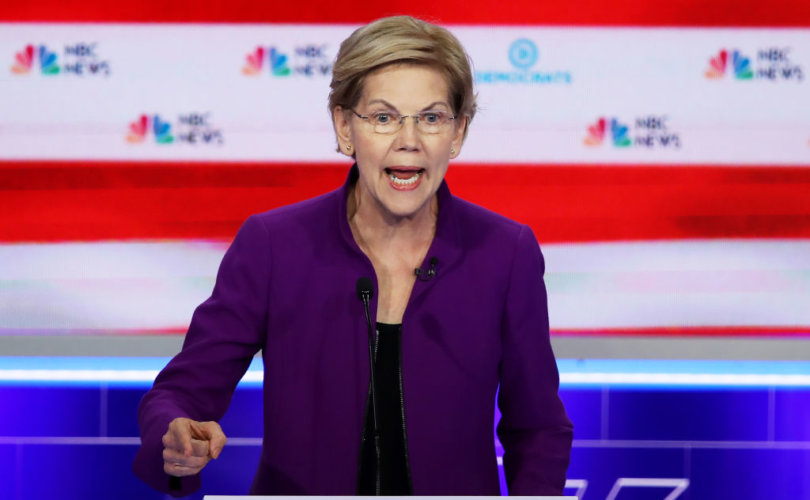 March 5, 2020 (LifeSiteNews) – With Elizabeth Warren’s decision to drop out of the 2020 presidential race, the progressive pundits have flung themselves into fits of mourning.

Warren was, we are being told, a magnificent candidate, with her penchant for perfect plans and her brilliance rendering her the obvious choice. The fact that people obviously did not see her this way has the commentariat calling out the stupidity of Democratic primary voters, with Megan Garber in The Atlantic announcing that “America Punished Elizabeth Warren for Her Competence” and Jessica Valentia sniffling that “It Will Be Hard to Get Over What Happened to Elizabeth Warren,” among dozens of other hard-to-make-up headlines.

It must first be pointed out that America didn’t punish Elizabeth Warren for anything: It was the Democrats who decided to go with one of two geriatric white men over her. That is the sort of thing that Democrats claim to care quite a lot about, so perhaps a bit of soul-searching about the obvious chasm between the professed values of the Democratic elites and the preferences of their voters might be in order. One obvious factor that nobody likes to discuss is the fact that African American voters are actually far, far more socially conservative than white Democratic voters — they lean heavily left economically, but are not, as a demographic, big fans of the LGBT agenda. (That is one of the key but unspoken reasons Pete Buttigieg could not get any traction in the black community.)

We’ve seen this all before. When Hillary Clinton lost to Donald Trump, many progressives claimed that she lost because she was a woman. Over and over again, we were told that she was the most competent and qualified candidate ever to run for the White House, and those parroting this line did not seem to realize that many Americans simply thought that was nonsense. Many Americans felt that Clinton had spent her entire career fighting for things they found reprehensible, and were willing to gamble on a Trump presidency to avoid handing her the keys to the Oval Office. But apparently there is no such thing as a bad female candidate (or at least a Democratic one, that is) — only bad and stupid voters who do not understand what is good for them.

Much of this has to do with abortion. Millions of Americans will crawl over glass to vote for a presidential candidate they dislike personally because he doesn’t believe it is a moral good to butcher babies in the womb throughout all nine months of pregnancy. To millions of people, Clinton, Warren — and yes, Sanders and Biden, too — are champions of a kill count that sits at 65 million and rising. Elizabeth Warren, that paragon of righteousness that everyone was too blind to appreciate, voted against protecting children that survived an abortion in a 2019 vote. To accept the premise that a Democratic candidate is the best man or woman for the job is to first accept the premise that killing the weakest and most vulnerable members of the human family is a right rather than the greatest stain on America since slavery.

So no, Elizabeth Warren did not lose because she was a woman. She lost because she was Elizabeth Warren, the same way Hillary Clinton lost because she was Hillary Clinton. Millions of Americans would be happy to vote for a female presidential candidate, but somehow I doubt that the commentators mourning Warren’s departure would be as supportive of Nikki Haley, for example. And that’s because, like most Americans, it isn’t the gender of the candidate they really care about. It is the candidate’s values. If Nikki Haley runs for president, we will be seeing these same commentators explode with the same vitriol they directed at Sarah Palin.

Because the only female candidates these people want to see are those who affirm that the destruction of preborn children in the womb is a prerequisite for women’s liberation.

Jonathon’s new podcast, The Van Maren Show, is dedicated to telling the stories of the pro-life and pro-family movement. In his latest episode, he and author Mary Eberstadt discuss the decline in religious belief in western civilization. Did the secularization of society lead to the death of the family, or did the death of the family lead to the secularization of society?