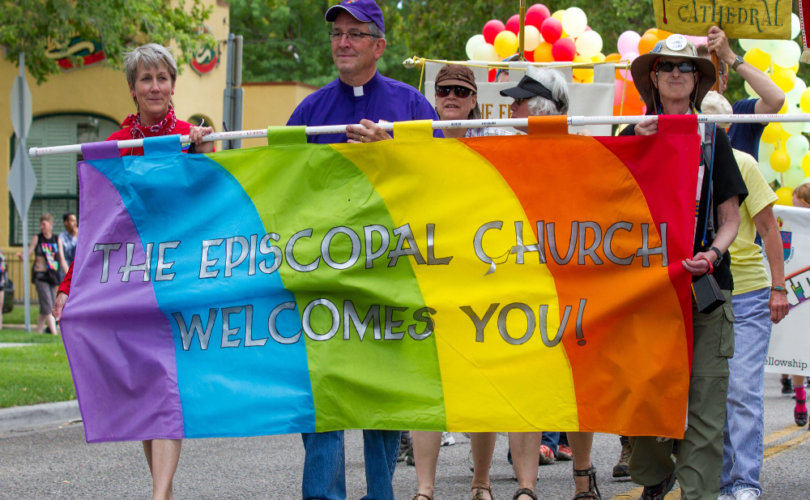 (LifeSiteNews) – It has been a terrible few weeks for the transgender movement. The attorney general of the United Kingdom announced that schools are obligated to provide sex-segregated bathrooms; that teachers cannot assist children in “socially transitioning” without the knowledge of their parents; and that teachers are not necessarily obligated to use a students’ new “preferred pronouns.” Additionally, The Times broke the news that up to 1,000 families are expected to join a class-action lawsuit against the Tavistock gender clinic after an NHS report highlighted the devastating long-term implications of the treatments prescribed and performed there.

And so naturally the Episcopal Church chose this moment to issue a blanket endorsement of so-called “gender-affirming care” at any age. From the Episcopal House of Deputies Resolution:

Resolved, that the 80th General Convention calls for the Episcopal Church to advocate for access to gender affirming care in all forms (social, medical, or any other) and at all ages as part of our Baptismal call to “respect the dignity of every human being”; and be it further

Resolved, that the 80th General Convention affirms that all Episcopalians should be able to partake in gender affirming care with no restriction on movement, autonomy, or timing; and be it further

Resolved, that the 80th General Convention understands that the protection of religious liberty extends to all Episcopalians who may need or desire to access, to utilize, to aid others in the procurement of, or to offer gender affirming care; and be it further

Resolved, that this 80th General Convention supports public policies at the local, state, and national levels in all our countries to support gender affirming care.

“Gender-affirming care” is trans-speak for sex changes and puberty blockers. It means castrations for the boys; double mastectomies for the girls; and life-long drug regimens that irreversibly damage those who take them. One of the most devastating revelations in the NHS report into the Tavistock clinic is that puberty blockers likely impact brain development and decision making as well as deforming the genitals, eliminating sexual function, reducing bone growth, and destroying fertility.

Despite that — and despite warnings from clinicians and medical practitioners from France to Finland — the Episcopal Church has endorsed these practices “with no limit on timing.” As far as the Episcopalians are concerned, Johnny can get his sex change right after his public school teacher lets him know that it is an option.

This is disturbing but not surprising. The Episcopal Church has been post-Christian for some time, and has fully bought in to the premises of the transgender movement. The Anglicans have released pastoral guidance on how to perform a special “baptismal” service for transgender people with their new name and chosen gender; the Church of England has sought to actively recruit transgender clergy; former Archbishop of Canterbury Rowan Williams called on Boris Johnson to include transgenderism in his conversion therapy ban, despite warnings from experts who pointed out that it would actually prevent children from getting therapy they need to feel comfortable in their own bodies.

For a clergyman of Williams’ prominence to call for a law that would prevent pastoral care to those with unwanted gender dysphoria gives you an idea of just how far mainline Protestantism has plunged. Reading the Episcopal Church’s new declaration, a verse from Scripture came to mind:

Children today need protection now more than ever. They will not find it in the Episcopal Church, where the wolves in sheep’s clothing wear their rainbow cassocks with wide, toothy smiles.