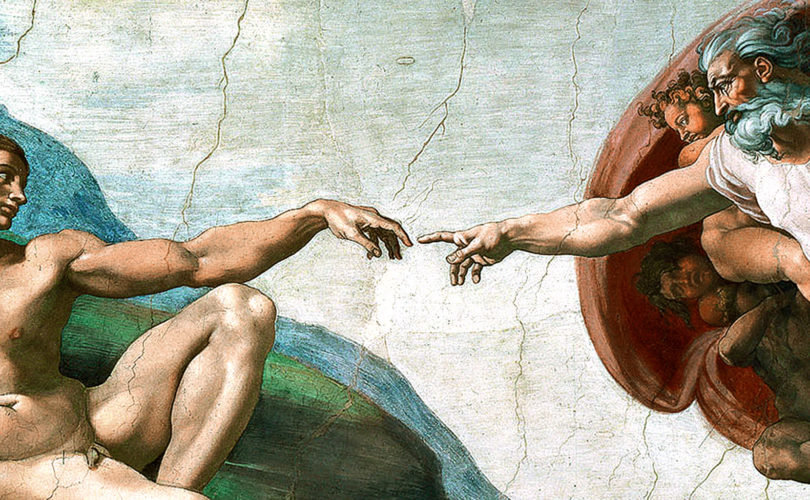 The prime inequality in its goodness confronts us at every moment of our lives. God is God: He made us, we did not make ourselves.

It follows then that we must reject, categorically, all lies about man. And the governance of the world about us is a most efficient machine for the production and proliferation of lies. We cannot preach truth in the language of lies, no more than the martyrs of old could find a “Christian” way to offer incense to the emperor. Jesus bore with the weakness of man. But he did not ever compromise with a lie. He did not cut a bargain with Satan.

If we are to speak to our children in the language of truth, we have to be, as Jesus says, as wise as serpents. That is, we have to identify the lies, and we have to be courageous in revealing them for what they are.

Yet the devil comes to us in the guise of an angel of light. Few people at any one time are so far gone down into the spirals of evil that they embrace what is hideous for its own sake. So we must ask: in a world organized or disorganized by the lie, what are the slogans that everyone has come to accept without thinking about them? They are the most likely carriers of the lie. And if we ignore them, our children may well be inspired by Milton or Shakespeare, so long as they are reading them, but will revert to the slogan as soon as they close the books.

Perhaps the most potent of the lies is “equality.”

Envy insists upon equality. Love admires excellence, and is grateful for it in others. So it is, as the acute philosopher Plinio Correia says, that we begin by speaking of equality and end in the hatred of God.

The Christian imagination recognizes more than equality: it recognizes and honors excellence, wherever it may be found. This is true both in the Church's history and in the arts she has inspired. The saints are our aristocrats, and the knights who lead us to battle. Joan of Arc, the peasant girl, shines with a crown of glory, she who gave her life to restore a rightful crown to the timid French dauphin. John Vianney searches our hearts with the wisdom of holy simplicity, and before his steady gaze the theologians and philosophers stammer and fall silent. The noble-born Thomas Aquinas becomes a mendicant friar, and in the humility of his ceaseless submission to and search for what is true, he becomes the patron of Catholic scholars and a prince of clarity.

All men are equal in their having been made by God for bliss. They have an equal right to what is good and true and beautiful. Each of them, made in the image of God, is a more glorious creature than all the rest of the physical universe. For any one of them, as for a universe, the Son of God came down to shed His blood.

The terrible irony is that the Liars of Equality deny what I have just said, or, if they still call themselves Christian, they confound these truths with falsehoods. For human beings are manifestly not equal in intelligence, skill, perseverance, virtue, health, beauty, wisdom, and the accidental blessings and trials of life. These inequalities are also to be cherished and honored. They too have been willed by God.

Even if Adam and Eve had not fallen, the human world would have been abundantly blessed with inequalities, with the wise and the simple, the skilled hand and the blunt, the soul in which the love of God burns with a steady glow, and the soul so inflamed with that love that it seems to consume all the world about it. “Various voices make the sweeter song,” says Dante.

The inequalities are more than differences. They imply order and hierarchy. It is no shame to serve. Man is made to serve. The only shame is to serve an unworthy master.

God has made us to thrive by and within structures of order; that is one of the lessons of Saint Paul's teaching, that we are incorporated as members of the Body of Christ. A body is not an amalgam of atoms. It is not a collective of self-willed individuals. It possesses order and hierarchy. The hand is a hand, not a foot or a head, but it is for the foot and the head, as the food and the head are for it. Each member is most itself when it most subserves the health of the body; and the body is healthy when, so to speak, each member is so honored that the body seems to live as much for each as for all together.

If it's too neuralgic to speak about the goodness of inequalities among persons, we should begin by affirming inequality and hierarchy within the person. Our opponents are consistent in this regard: their insistence upon a radical social equality is matched by a radical leveling of the faculties of man. Reason is dethroned, and her rightful servant, the calculative faculty, is set up in her place, as if the only truth we can discover is what can be measured or reduced to mathematics. Love of beauty is displaced, and her rightful servants, the pragmatic skills, are set up in her place, as if the only things worth making are those that serve utilitarian ends. The virtues are dethroned, so that the vices can run free. In the end, unreason and a positive desire for ugliness come to rule the day.

What would we think of someone blessed with strong passions, who does not order them but lets them go wild, so that in the end he is a raddled old man dabbling in porn to keep himself awake in the afternoon? Or someone blessed with a thirst for righteousness, who does not order that thirst according to what is good and true, but instead begins to thirst for ambition instead, so that his path to a “rightful” place of honor is littered with the wreckage caused by his injustice? What should we think of the plain and ordinary man, who in a sane age would work hard at an ordinary job, be the head of a good family, and pass on to his children and grandchildren the wisdom of his church and his culture's traditions, sunk instead into the vulgar and the trivial?

We see in such cases that there should be order among the faculties; they are not equal; and people who observe the order in their souls are not the mere equals of people who do not. Why should this trouble us? Isn't the superiority of someone else a gift to the rest of us? What envy is it, what hatred of the excellent, that would cause me to desire that everyone else be only as wise, as virtuous, and as holy as I am?

After all, the prime inequality in its goodness confronts us at every moment of our lives. God is God: He made us, we did not make ourselves. Envy insists upon equality. Love admires excellence, and is grateful for it in others. So it is, as the acute philosopher Plinio Correia says, that we begin by speaking of equality and end in the hatred of God. The cure can only begin by exposing and rejecting the lie.