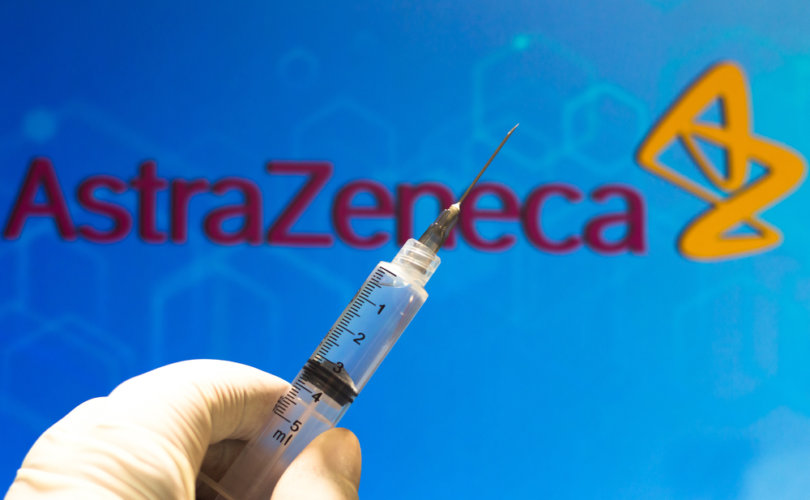 March 19, 2021 (LifeSiteNews) — The European Medicines Agency, Europe’s drug regulator, concluded on Thursday afternoon that the Oxford/AstraZeneca COVID-19 vaccine is safe to use. Previously, it had been suspended in more than a dozen European countries where concerns were growing because of blood clot incidents. Vaccinations will resume in most countries, but the Scandinavian countries — Norway, Sweden, and Denmark — will wait.

The pause may well have been triggered by recent findings by a Norwegian research team that thinks it has found the reason for the thrombosis following the AstraZeneca shot.

The team decided to investigate the reason why three health workers — all under 50 years old — experienced severe thrombosis shortly after having received the jab. One of them died last Monday from brain haemorrhage.

Their results were made public on Thursday, but did not change the EMA’s approach: The European drug regulator merely decided to add a warning that it could not definitively rule out a link between the AstraZeneca jab and a “blood clotting disorder.” Despite several incidents and three deaths due to thrombosis following vaccination, EMA’s executive director Emer Cooke proclaimed: “I want to reiterate that our scientific position is this: This vaccine is a safe and effective option to protect citizens against Covid-19.”

Back in Norway, Professor Pål Andre Holme of the Rikshospitalet University Hospital of North Norway told the national daily VG that the three health workers whose cases were studied by his team experienced severe blood clotting because of the “strong immune response” triggered by the AstraZeneca shot. “The cause of our patients’ condition has now been found,” he said.

He suspected that an unexpected immune reaction had taken place, and found evidence that greatly supports this theory, showing that the AstraZeneca shots were followed by the appearance of “very specific antibodies.”

“Our theory that this is a strong immune response that most likely comes after the vaccine, has been confirmed. In collaboration with the section for advanced platelet immunology at UNN, we have now detected specific antibodies against platelets that can give such a picture with which we are already familiar in other fields of medicine, but here drugs are the triggering cause,” he explained.

Professor Holme is sure that he is correct: “We have the reason. And there is no other thing than the vaccine that can explain that we have received that immune response,” he told VG. He stressed that the patients involved had no other medical history that could have explained such a strong immune response. “I am absolutely certain that it is these antibodies that are the cause, and see no other reasons than that it was triggered by the vaccine,” he said.

Of course, vaccines are designed to obtain an immune response, so what went wrong specifically in the cases assessed by Holme’s team? In simple terms, he said: “We take the vaccine to get an immune response to what we are to be protected against. It leads to, among other things, the development of antibodies. Certain antibodies can then react so that they activate the platelets, as in these cases, leading to a blood clot. Because we have these antibodies on the surface, platelets are removed from circulation, and patients’ platelet count becomes too low.”

FranceSoir, France’s only mainstream media that actively denounces many of the manipulations surrounding the COVID crisis, explained the mechanism: “The function of platelets is to arrest bleeding. When you have a cut or injury to the blood vessels, the platelets move to the site of the injury and clump together to avoid bleeding.”

“Then a new mechanism is inserted: the blood clotting system is activated,” FranceSoir continued. “This is the system that will actually stop the bleeding. Fibrin, which looks like long threads, moves into the wound site. These threads are laid down and seal the plugs that prevent bleeding. Once the damage is repaired, the thread dissolves and the platelets return to circulate in the blood.”

“A blood clot occurs when too many platelets have accumulated, so the clot does not break away naturally.”

After receiving the AstraZeneca vaccine, the three patients assessed by Professor Holme had similar, rare symptoms: acute pain, blood clots in unusual places such as the stomach and the brain, bleeding, and low platelet counts.

Even if the number of adverse reactions of this kind to the AstraZeneca vaccine is very small compared with the amount of people who have already received the shot in Europe (120,000 patients received it in Norway alone), Holme’s findings belie the reassuring statements by health authorities in several countries saying that the incidence of thrombosis is no higher among vaccinated people than in the general populations. He has shown that there is a link, and that it is direct.

Speaking with the Norwegian daily Aftenposten, Holmes said that it was not up to him to assess whether the AstraZeneca vaccination campaign should be stopped altogether, but to the Norwegian Medicines Agency.

He added that he had no explanation for why this dangerous adverse reaction was seen in the patients whose cases he examined, and not in others, meaning that there can be no screening before giving the jab, at least for the time being. “We will now start looking at whether there are underlying factors or special predispositions. There is an enormous amount of work here,” he told Norway Today.

In what may or may not be related to Holme’s findings, French academic and geneticist Axel Kahn, a former member of the French communist party who since then has joined the socialist party, warned that the appearance of a rare thrombosis in some thirty people in Europe after receiving the AstraZeneca vaccine “does not seem to be a chance occurrence.”

Speaking with the magazine L’Usine nouvelle, Kahn, who specialized in hematology and genetic engineering during his successful career, gave his opinion on the nature of the vaccine’s numerous effects: “The least implausible hypothesis is that it is a chimpanzee adenovirus infection. Although the vector used by AstraZeneca is an adenovirus that is normally defective for replication, the trade-off of using an adenovirus-vector against which there is no prior immunity — because humans have never encountered it — is that an infection may appear with more significant signs. Adenoviruses are known to give these signs. I myself have used adenovirus-vector extensively in gene therapy trials … so I knew what the possible side effects were when using too large a dose.”

Regarding the particularly serious blood clot incidents that led to the Norwegian study — which Kahn probably had not heard of when giving his comments to L’Usine nouvelle — he stated: “My hypothesis is that they could be an exceptional complication of the usually benign infectious syndrome triggered by the adenovirus — of the inflammatory syndrome in any case. It will be important to know if the affected women were taking the contraceptive pill, which comes with its own risk of promoting thrombo-embolic complications.”

Kahn, a former member of the French National Advisory Ethics Committee who opposed human cloning can hardly be shoved aside as a “conspiracy theorist.” He is at present at the head of France’s Anti-Cancer League and is a respected expert on matters related to genetics and ethics in the mainstream French media. Nor is he opposed to the accelerated vaccine campaigns which he has repeatedly justified because of the sanitary situation — but he insists that vaccination should not be compulsory.

Kahn had already issued a moderate warning against AstraZeneca vaccines back in November, when he told L’Usine nouvelle that some serious adverse effects needed further investigation. Like the Johnson & Johnson and Sputnik vaccines, AstraZeneca uses recombining viruses. Kahn stressed that they contain genetically modified organisms — something he himself has used in research for severe illnesses. Vaccines using the technique have been successfully used on animals, but the only existing one used for humans is in an experimental phase for Ebola.

When asked why there is more distrust regarding GMO vaccines than gene therapy, Kahn replied: “It is accepted for the treatment of serious diseases, whereas the mortality of COVID-19 is 0.5 percent. It remains a therapy that is used almost in a compassionate protocol. The first authorized gene therapy drug, unfortunately now unaffordable, offers very clear clinical improvements for children with spinal muscular atrophy, even if it does not lead to a cure. But that’s not the same order of magnitude as a vaccine that is available to hundreds of millions of people.”

The Norwegian study is expected lead to even more distrust of the AstraZeneca vaccine. Steinar Madsen of the Norwegian Medicines Agency said on Thursday that he expected its European counterpart to take the findings into consideration before publishing its own recommendation. Whether this happened or not, the EMA has decided to ignore the issues brought to light by Professor Holme.