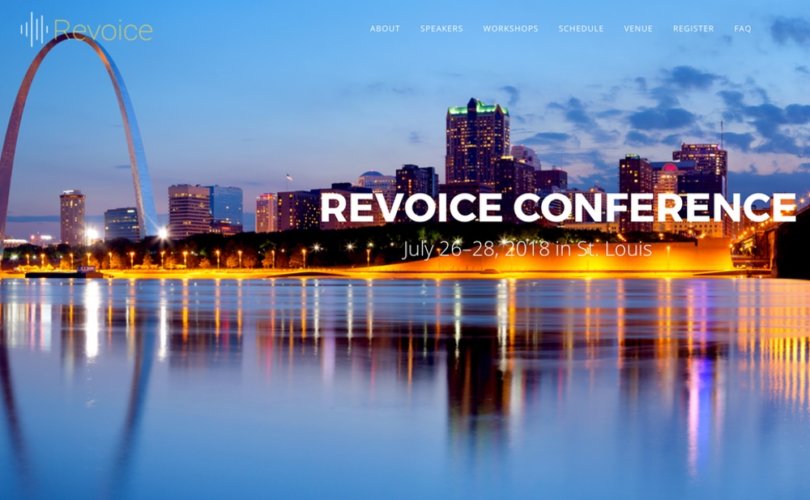 July 6, 2018, (LifeSiteNews) – When my good friend Peter LaBarbera, a pro-family leader and former LifeSiteNews colleague, wrote to let me know that his registration for the upcoming “Revoice” Conference was denied, I was alarmed.

Revoice has been in the news a lot lately in Evangelical circles. It is evidence of a movement afoot within the evangelical world similar to what we’ve experienced in the Catholic Church, mirroring the rise of pro-LGBT organizations such as New Ways Ministry and personalities such as Fr. James Martin, SJ.

And like the Spiritual Friendship movement within the Catholic Church, Revoice seeks to establish a new category of Christians: “Gay Christians,” a notion which implies that God creates people to be gay, and insists they should cherish their gayness.

While these groups and individuals always portray themselves as obedient to Church teaching, their aim is to normalize homosexuality and transgenderism within all of Christendom, directly opposing church teaching and best pastoral practices.

What and Who is Revoice?

The stated purpose of Revoice is, “Supporting, encouraging, and empowering gay, lesbian, same-sex-attracted, and other LGBT Christians so they can flourish while observing the historic, Christian doctrine of marriage and sexuality.”

Many sense that there is something more to the movement than that.

Mefferd also refers to Revoice as a “Trojan Horse,” and has called for the movement to be repudiated.

“While I am grateful that so many of those on the other side of this are embracing a biblical view of marriage I do believe that they have adopted an unbiblical view of human identity—one that treats same-sex attraction as a matter of moral indifference and homosexual orientation as an identity to be embraced,” said Denny Burk, Professor of Biblical Studies at Boyce College, the undergraduate school of the Southern Baptist Theological Seminary in Louisville, KY.

“There is little doubt that Revoice is intended to be revolutionary in shaping the thinking of evangelical churches,” concludes Pastor Tom Buck, Senior Pastor at the First Baptist Church of Lindale, Texas and currently completing his doctoral work at Southern Baptist Theological Seminary.

“Understanding the problems with the Revoice Conference does not require PhD level research,” says Buck. “Fifteen minutes is sufficient to familiarize yourself with its direction.”

What Revoice Leaders Believe about being Gay Christians

Nate Collins, President and founder of Revoice has previously referred to his same-sex attraction as “My redeemed gayness,” which “reflects the beauty of the gospel when my orientation is caught up in a desire to serve one of my guy friends.”

Collins has also said that “churches that adhere to a traditional understanding of marriage and sexual expression,” make it hard for people who identify as gay to feel as if they fit in.  “It’s much more difficult if Christian versions of heteronormativity are present and active in the community.”

“A gospel-centered ethic calls Christians to subvert straight privilege when it causes difficulty for gay,” said Collins who asks, “Have followers of Jesus been guilty of a baptized form of heteronormativity?”

The worship leader for the upcoming conference, Gregory Coles, expresses a common thought shared among those involved in the Spiritual Friendship movement––that God does indeed create people to have a gay identity:

Is it too dangerous, too unorthodox, to believe that I am uniquely designed to reflect the glory of God? That my orientation, before the fall, was meant to be a gift in appreciating the beauty of my own sex … ?

What if the calling to gay Christian celibacy is more than just a failure of straightness? What if God dreamed it for me, wove it into the fabric of my being as he knit be together and sang life into me?

Keynote speaker Wesley Hill has suggested, “Perhaps celibate gay and lesbian Christians, precisely in and out of their celibacy, are called to express, rather than simply renounce and deny, same-sex love.”

“Being gay colors everything about me,” said Hill. “Being gay is, for me, as much a sensibility as anything else: a heightened sensitivity to and passion for same-sex beauty that helps determine the kind of conversations  I have, which people I’m drawn to spend time with, what novels and poems and films I enjoy, the particular visual art I appreciate, and also, I think, the kind of friendships I pursue and try to strengthen.”

Ron Belgau, cofounder with Wesley Hill of the Spiritual Friendship blog, does not condone gay sex between men, but speaks positively about “cuddling” between homosexuals. “I believe that gay sex is sinful, and that the desire for gay sex, though not itself sinful, is a temptation that cannot be regarded as morally neutral.”  He says that the desire that same-sex attracted men experience is “much more complex than simply a desire for gay sex.”

However, Belgau does speak of intimate interactions between men with fondness:

That night, we split a few logs from the woodpile, built a fire in the fireplace, and made hot apple cider. Then we sat on the couch, staring at our physics textbooks and doing practice problems. Later, after the fire had died down and his parents had gone to bed, the conversation circled back to gays in the military.

“Doesn’t the concept of two men holding hands weird you out?” he asked.

Then he slid closer to me on the couch and reached for my hand.

“But aren’t you totally weirded out by two guys cuddling?” he persisted. Then he laid his head against my chest, where presumably he could hear my heart race. We kept arguing. After a few minutes, I took the risk of running my fingers through his hair. He did not resist, and we sat like that for the next couple of hours …

So far as I can recall, although I was quite happy with cuddling with him, the idea of trying to escalate this into a sexual encounter never seriously crossed my mind. At any rate, although I have extraordinarily vivid memories of this particular evening, I don’t remember struggling that much against sexual temptation. I just remember a feeling of incredible tenderness …

Hoping to attend the Revoice conference in order to better understand its goals and motives, pro-family activist Peter LaBarbera, founder of Americans for Truth About Homosexuality, was informed by Revoice Founder Nate Collins that his registration had been rejected:

Based on publicly available information, we believe that your presence at the inaugural Revoice conference would work against the stated mission and purpose of Revoice. We are refunding your registration fee in full, and would be happy to answer any further questions you might have.

President and Founder of Revoice

LaBarbera responded to Collins with the following series of questions:

1) Will you allow LGBTQ activists to attend Revoice who do NOT share your belief against acting out homosexually (e.g., religious activists with groups like Human Rights Campaign)? Have any registered to attend?

2) To the same point: are all attendees at Revoice committed to honoring the biblical proscription against homosexual practice? Have you researched the histories of other attendees–including those who one might have reason to suspect embrace a full sexual expression of their “gay” identity–as you did mine?

3) If such “fully pro-gay”/affirming-homosexual-practice advocates are indeed allowed to attend, do you see a problem in allowing people who reject biblical teaching on sex and homosexuality to attend Revoice while ejecting people like myself who defend these same biblical teachings? (Again, this is assuming that both types of advocates would be peacefully attending and not disrupting your proceedings in any way.)

4) Does Revoice accept funding from pro-gay groups and advocates who do NOT share your commitment to abstaining from homosexual practice (eg, HRC, GLAAD, etc.)? What will be your policy on this going forward?

5) Would you allow thoughtful “ex-gays” like Robert Oscar Lopez and orthodox Christian scholars like Robert Gagnon to attend Revoice? Here is a video by Bobby based on a conversation he had with Karen Swallow Prior:

6) Will Revoice be encouraging debates/discussions with Christians (like me and Bobby) who adhere to more orthodox teachings on sexuality?

7) Will all future Revoice conferences be closed to Christians who defend orthodox teachings on sexuality, including those like me who actively oppose LGBT groups in the Public Square. (You will note from my Twitter feed that I routinely engage in dialogue with homosexual and transgender activists, including those on the far-left of the ideological spectrum–with whom I assume we both disagree.)

8) Does or will Revoice take a position on LGBT legislation, such as SOGI (Sexual Orientation/Gender Identity) laws, laws banning “conversion therapy,” “gay marriage,” and laws like that in OK and Texas protecting the right of faith-based adoption agencies not to place children in same-sex households?

9) Will the Revoice sessions be taped so that all Christians and interested observers everywhere can evaluate this conference and address your speakers' arguments?

Thanks in advance for answering these questions, and again I urge you to reconsider your decision to bar me from Revoice. As I have told countless homosexual and trans activists over the many years, there is always room for civil engagement with opponents, and I hope that holds true going forward for the “gay Christian” debate that is surely going to grow in the culture. All the best.

Concerning LaBarbera’s ouster, talk show host Mefferd tweeted: “Revoice: where love, tolerance & “biblical sexuality” are celebrated! Oh, wait … no, if you believe in gospel transformation for homosexuals, YOU'RE KICKED OUT!

Revoice: where love, tolerance & “biblical sexuality” are celebrated! Oh, wait … no, if you believe in gospel transformation for homosexuals, YOU'RE KICKED OUT! https://t.co/rIUAsGpSjZ

“The next scandal now unfolding before our eyes in both the Catholic and Protestant churches,” notes Christian author and commentator Fay Voshell in a recent Facebook posting, “is the formation of the unholy alliances of secularist and Catholic/Protestant LGBT movements determined to legitimize what has formerly been regarded by all denominations as distorted sexuality, thus mainstreaming LGBT goals into the structures of the Church.”

Voshell points to, “a powerful network, which if successful, will result––as it already has resulted in Mainline Protestant churches––in the normalization of sexual sins that will then be sanctified by special liturgy and rites.”

“The Southern Baptist Convention and the Catholic Churches are among the biggest targets,” continues Voshell. “We must realize that the power and wealth of the Churches sought after by a heretical movement that would then use the Church for its perverted ends.”