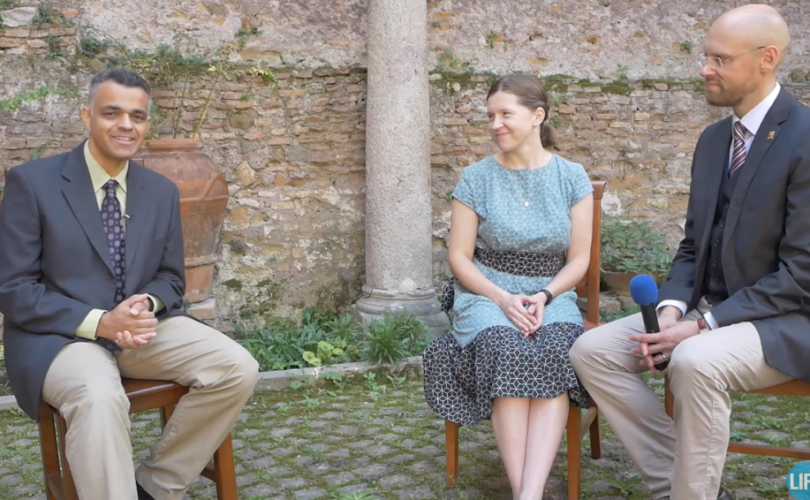 ROME, December 3, 2019 (LifeSiteNews) — During my most recent trip to Rome I had the distinct pleasure of sitting down with Varro and Helena Vooglaid, an inspiring Catholic couple everyone needs to hear from. Varro is one of the leading pro-life, pro-Christian commentators in Estonia, a country of 1.2 million that has less than 4,000 Catholics. His wife is a wonderful mother to their 7 beautiful children.

Estonia is probably the last place you’d expect to find someone like Varro and Helena. After all, they admitted to me that “after 500 years of Protestantism and 50 years of Communism there’s hardly anything left of Catholic culture in Estonia…from a Catholic perspective it’s really a wasteland.”

Varro and Helena sadly informed me that almost nobody in their generation is Catholic and that their 7 children probably makes them one of the largest families in the entire country!  “The society is not Catholic,” Varro said, “so we have to present our arguments in ways to those who don’t share our belief systems so they can understand them.”

Varro and Helena shared with me how their visits to Rome have played an integral part of their faith journey. Both had been baptized Lutheran as infants. They even told me that LifeSite has “very much” inspired them to “give truth a podium” in their own country! Amazing! I am so humbled by that.

They shared with me great anecdotes about their upbringing and family life and how Helena’s mother has been influential in not only their own faith but in the faith of others. Helena, who homeschools her children, told me her mom is an “educational guru in Estonia” and that she established a Christian school and a private Catholic school.

Varro and Helena met with me in Rome during the Acies Ordinata, a prayerful protest of 200 lay Catholics near the Vatican held in October on the eve of the Amazonian Synod. They said they went to the protest because there needed to be a “public profession of fidelity to the doctrines of the Catholic Church.”

Varro, who recently hosted Estonia’s Foreign Minister on his program, also told me he went to the Acies Ordinata in order to “give testimony to the fidelity of the traditions” of the church. “We shouldn’t be afraid to say it openly,” he added.

As far as Pope Francis goes, Varro said that he knew very early on that something was amiss. Pope John Paul II was an “immense source of inspiration for us,” he said. “He visited Estonia!” and was a vigilant pro-life fighter. But Pope Francis was silent when the Ireland abortion referendum took place. “There was a deafening silence,” Helena said, explaining that she wept over the pope's indifference. “When was the last time we saw or hear the leadership of the Church bravely and openly defending family and life?”

Varro concluded our interview by saying that even though it is “painful” to watch Pope Francis lend support to the enemies of the church, Catholic men still want to fight for something. They want to endure suffering for Christ and be knigths in his army, he said.