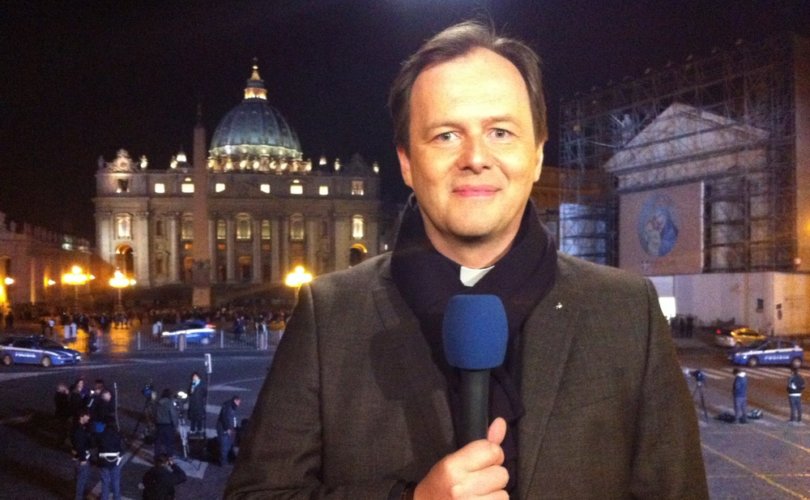 “He should not have done that,” says the priest in a September 18 report by the German bishops’ website.

He refers here to Pope Francis' initial public rebuke of the abuse victims who accused Bishop Juan Barros of covering up the abuse of a Chilean priest by the name of Fr. Fernando Karadima. The Pope first had defended Barros, before he finally changed his position, apologized to the victims, and accepted Barros' resignation. Today the Vatican announced that the Pope is laicizing Karadima.

Hagenkord says that he and his colleagues were “blown away” by how “off the mark” the Pope’s action was.

“There was an audible crack among many loyal people,” Hagenkord adds. “In Rome, there are still too many people who say that all of this should just pass by.”

Hagenkord himself had been involved in the “Lettergate” concerning the distortions of a published letter written by Pope Emeritus Benedict XVI.

In a blog post at Vatican Radio, Father Hagenkord criticizes the overly defensive attitude of some German bishops who were especially indignant about the fact that their sex abuse report was prematurely leaked. With regard to their indignation – that it was not left to them to present and interpret the report – the priest comments: “I must be astonished, why does one now have to leave the interpretation up to the bishops?” For the German bishops now to “pout about” is not a solution, Hagenkord adds. One has now to “regain trust,” after “years of looking away.”

“The perception of the Church has changed,” Hagenkord writes on his blog. “If we do not face this, also in the field of communication, nobody will listen to us anymore.”

After all these recent sex abuse reports in the world, he says, “The Church will be different. We have to speak.” These are Hagenkord's words in yet another recent post.

Will Hagenkord himself also soon apply these very words to Pope Francis himself? He has also written on his blog that he was “proud” of Pope Francis' silence in the Viganò affair.

It might be an apt counsel in light of the fact that even liberal media – Catholic and secular alike – are growing skeptical about this papacy. Some examples are the recent article published by the secular magazine Der Spiegel and the new article summing up Pope Francis' failures with regard to sex abuse cases published by the Catholic progressive-minded Herder Korrespondenz. Cindy Wooden, of the U.S. bishops Catholic News Service, had her own unsatisfactory experience with Pope Francis during the recent flight back from the Baltic trip. She comments on Twitter:

Shot down by #PopeFrancis. He wanted questions only about the Baltics trip. I said I had questions he left unanswered on the way back from Dublin. They were trip questions. Just not this trip. #FoiledAgain #Vigano. pic.twitter.com/rl91FGDxxY