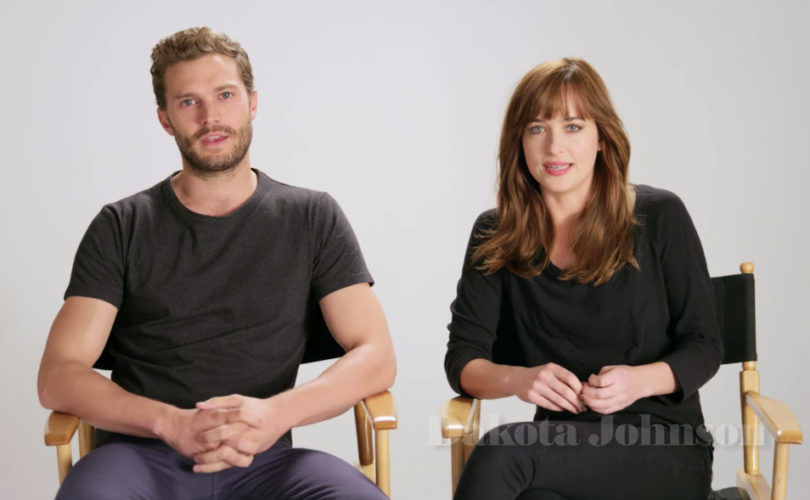 I kind of have to pity Jamie Dornan and Dakota Johnson, the co-stars of the forthcoming cinematic adaptation of E.L. James’ best-selling book “Fifty Shades of Grey”.

Back in 2012, when the movie adaptation was announced, every actor and actress on the planet was drooling over the roles of Christian Grey and Anastasia Steele. After all, playing the lead in any movie based upon a book that has sold over 100 million copies is pretty much a guaranteed straight ticket to stratospheric stardom.

Which is exactly how things have panned out for Dornan and Johnson – before more or less unknowns, now basically household names.

But unfortunately for the pair, once the initial excitement of receiving the casting call had abated, they still had to go through the process of actually playing Christian Grey and Anastasia Steele: i.e. two of the most vapid, one-dimensional and unsympathetic characters ever, drawn from a book that, when you actually read it, you discover is basically a plot-less, poorly-written, 500-page glorification of misogyny and domestic abuse, based around a bunch of weird and unpleasant sexual practices.

Which is a bit of a letdown. And which is probably why Johnson and Dornan have been so painfully ambivalent about the film during their recent press tour appearances. Actually, that's being way too kind. After all, what do you call it when one of the lead actors kind of, sort of appears to compare the “Fifty Shades” phenomenon to…well…Hitler.

Here’s Dornan grappling with the reasons why the “Fifty Shades” books are so popular: “I wonder what it is about this set of books that has, excuse my pun, penetrated the global market. Mass appreciation doesn't always equate to something good. Think of Hitler! But I think, in this case, it must. It simply must. There's got to be merit in it if so many people agree.”

In other words, Dornan, after spending months immersing himself in the story and the character of Christian Grey, still has absolutely no idea why anybody would ever actually like the books – and kind of, sort of, possibly thinks that maybe the same dynamic could be at work as what made Hitler a thing: or at the very least, has been forced to fall back on sheer blind faith that the fans of the books have actually found something positive in them.

However you slice it, that’s not exactly the kind of ringing endorsement the studios were probably hoping for from their Christian Grey.

But then again, maybe there’s more to it than that. Perhaps the reason the words “Hitler” and “Fifty Shades” ever pop into Dornan’s mind in the same sentence is because he actually had to live and experience the books in a way that none of their fans ever will.

After all, while most of the books' readers quickly skimmed through the awful grade two-level prose, immersing themselves in a world of weird sexual fantasy for a day or two, before tossing it aside and never giving it a second thought, Dornan is the one who actually had to visit a sex dungeon to find out first-hand exactly the kinds of things Christian Grey wanted so desperately to do to Anastasia Steele, and then had to go back on the movie set and actually do them to Dakota Johnson. (Which perhaps might be why Johnson and Dornan reportedly can’t stand one another. But that’s a different topic for a different day.)

By Dornan’s own admission, neither experience was pleasant. After visiting the sex dungeon and returning home to his wife and daughter, he admits, “I had a long shower before touching either of them.” In fact, the dichotomy between his life as a family man, and what he was being asked to do on set, seems to have bothered him quite a lot. “The first day [of filming] was kind of an out-of-body experience. I got there and they said, 'Action!' I’m like, 'What the f–k is happening? I’m a dad. What?'”

(Hitler…serial killers. Anybody noticing a trend?)

And then there’s Dakota Johnson…who kind of, sort of, maybe hopes that nobody ever watches the movie. “I don’t want my family to see it, because it’s inappropriate. Or my brother’s friends that I grew up with. Also there’s part of me that’s like, I don’t want anyone to see this movie. Just kidding.”

Except maybe not. “Sometimes I did walk off the set feeling a bit shell-shocked,” she told Glamour, admitting that while shooting the sex scenes, “there were some painful moments.” “I got whiplash once from him throwing me on the bed; so f–king painful.” And just in case you thought that maybe there was something sexy about shooting a sex scene. Nope. Definitely not. “It's just sweaty and it's not very comfortable. And on top of that, my hands and legs were tied, and I was blindfolded, and I was being hit with this bizarre tool. … It was emotionally taxing. At first I was like, 'Oh my God, this is the worst thing ever,' and then I was like, 'All right, let's get on with it.'”

But no worries. “The drive home from work always helped me snap out of it. And a big glass of wine.”

By all accounts, despite all the miserable reviews that are starting to pour in, “Fifty Shades” is set to break all sorts of box office records. But before you girls out there drag your husbands or boyfriends to the theatre to shell out a few more bucks, and before you husbands or boyfriends agree to go in the hope that maybe a few spicy sex scenes will make up for the dull storyline, maybe you should think about asking yourselves why the two people who were tasked with playing out your fantasy seem to think that that fantasy is more akin to a nightmare than a daydream.

And then perhaps spend a few minutes pondering what ever went so horribly wrong that millions of us have apparently accepted this kind of lurid, nightmarish fantasy as a desirable, or at least acceptable form of escapism.

P.S. Here's a petition to boycott the “Fifty Shades” movie, if you're interested.