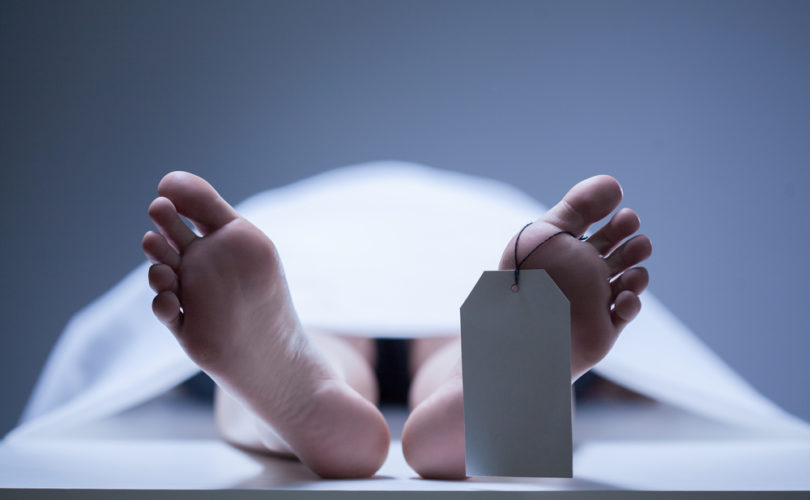 April 6, 2020 (LifeSiteNews) – In January, people in Wuhan began dying of the novel coronavirus. Not long thereafter, disturbing pictures began to leak out of China showing hospital hallways crowded with the bodies of the dead, and vans loaded with body bags heading toward crematoria. Yet the rapidly rising death toll these pictures suggested was not reflected in the official death toll, which remained puzzlingly low.

Now, I have long been skeptical of numbers coming out of China, which are always crafted with one goal in mind — to make the Party and its leaders look good. So I began to look for other metrics that might give me a clue as to what the real death toll was. I found one answer in the ovens of Wuhan’s seven crematoria.

Understand that everyone who dies in China is cremated. Not long after the Communists took power in 1949, the traditional practice of burying the dead in coffins was outlawed on the grounds that it took land away from farming. This means that we can assume that the number of cremations equals the number of deaths.

By January 30th, the Wuhan authorities reported that only 170 people had died in Wuhan and the surrounding area. Yet two days before, on January 28th, they announced that they were “dispatching extra vehicles, staff, and protective gear to all of the local mortuaries.”

“To improve the capacity of transporting and dealing with corpses.” They also suddenly offered “free cremation for the corpses of coronavirus victims who died on January 26 or later.”

These actions made it obvious that the real body count was going up a lot faster than the official count. In fact, by all indications, the mortuaries were being simply overrun with corpses.  Wuhan mortuaries had to add night and weekend shifts to cope with the numbers. We know this because they posted “help wanted” advertisements online to recruit workers for night, swing, and weekend shifts. Also, for two full months during the height of the epidemic, from January 23rd to March 23rd, no funerals were held at the mortuaries, and grieving relatives weren’t even allowed to pick up the ashes of their loved ones.

So how many bodies were cremated during this time? Let’s crunch the numbers. The seven mortuaries in Wuhan proper have a total of 84 ovens. Assuming that each cremation takes two hours, that number of ovens could have reduced 1,008 corpses to ashes each day. At this rate, some 60,000 bodies could have been cremated over two months, from which we have to subject the normal non-epidemic related mortality of roughly 10,000. This gives us an estimated number of deaths from the Wuhan Coronavirus of 50,000.

Another estimate comes from the huge numbers of funeral urns being handed out.

It was announced on March 23rd that grieving relatives would finally be allowed to come to the mortuaries to pick up the ashes of their loved ones. Long lines quickly formed outside of Wuhan’s mortuaries as people waited for hours to receive the remains of their loved ones lost during the epidemic. They were told that they must pick up the urns by April 4, a traditional holiday called Tomb Sweeping Day where Chinese memorialize their ancestors.

Investigative journalists from Caixin reported that funeral urns were being distributed at a rate of 500 a day at Wuhan’s seven mortuaries, meaning that a total of 3,500 urns were being handed out each day. Given that the window for picking up the urns was 12 days long, this would mean that 42,000 urns would be given out during that time.

One photo published by Caixin shows a truck loaded with 2,500 urns arriving at the Hankou Mortuary. When questioned, the driver said he had delivered the same number of urns to the same mortuary the day before. Another photo shows stacks of urns inside the mortuary totaling some 3,500 urns. Taken together with the new shipment, the number of urns on hand at this one mortuary alone looks to be more than double Wuhan’s official death toll.

To buy the silence of the people, the Communist authorities have been handing out hush money. Wuhan resident Chen Yaohui told RFA that “There have been a lot of funerals in the past few days, and the authorities are handing out 3,000 yuan in hush money to families who get their loved ones' remains laid to rest ahead of Qing Ming,” he said, in a reference to the traditional Tomb Sweeping Day on April 4. “It's to stop them from wailing,” Chen said, referring to a traditional form of mourning. “Nobody will be allowed to wail after Qing Ming has passed.”

As reported by Bloomberg, U.S. intelligence agencies have also concluded that Beijing falsified its numbers, although their report remains classified. And when President Trump was asked at his April 1 press briefing about China’s numbers, he responded that they “seem to be a little bit on the light side. And I’m being nice when I say that, relative to what we witnessed and what was reported.”

I think the president was being not just nice, but extraordinarily diplomatic, given Beijing’s ongoing deceit where the epidemic is concerned. Remember, we are talking about the same Communist Party that asserts no one died in Tiananmen Square, when the actual death toll from the Tiananmen Massacre was 10,000. This is the same CCP that asserts that no one died in the famine after the Great Leap Forward, when in fact 42.5 million people starved to death.

Bear that in mind when you consider the official Chinese government data for Wuhan, which show that only 2,535 people died from the disease, and only 50,006 people were infected.

I think the official figures are understated by a factor of 20. That is to say, the real number of fatalities is perhaps 50,000. As for how many people were infected, if you assume a case fatality rate of 2 percent, then 2.5 million people in the city came down with the coronavirus.

Down to the present day, China continues to conceal the truth about the epidemic within its own borders by publishing false data. These are not harmless little white lies. They are lies that kill.

Tens of thousands of people will die unnecessarily because the Communist Chinese authorities did not warn us about the seriousness of the epidemic in Wuhan and share the data that it was collecting about the spread and treatment of the disease. Tens of millions of others will suffer because the Communist Chinese sent the global economy into a recession. This, too, will cost lives that otherwise could have been saved.

There is a hashtag trending on Twitter that sums up the situation: #ChinaLiedAndPeopleDied