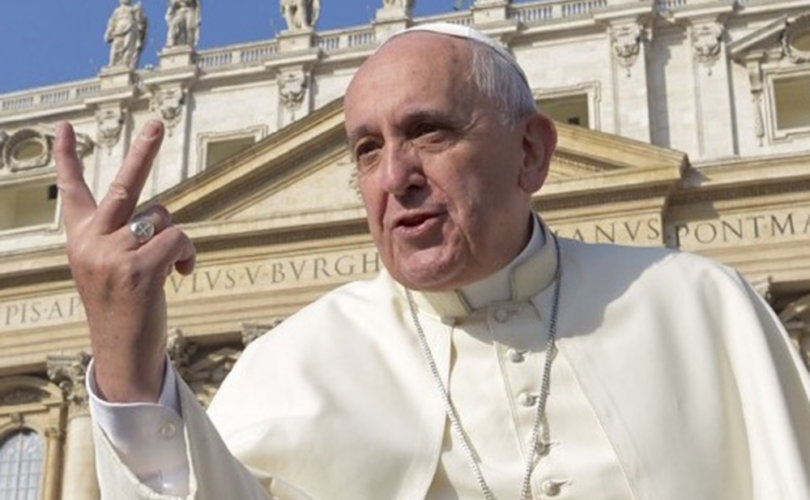 March 29, 2019 (LifeSiteNews) – Cardinal Carlo Martini, before he died in 2012, referred to himself as an “ante-pope,” one who would be a “precursor and preparer” for a new pope who would bring about “radical…change” in a “tired…pompous” Church. In his 2012 book Night Conversations with Cardinal Martini the leader of the so-called St. Gallen “mafia” laid out what amounts to a blueprint for how change could be effected in the Church regarding her teachings on sexuality, marriage, contraception, sin, hell, male-only priesthood, and much more.

Martini never got to see his blueprint for a new pope put into action. Cardinal Bergoglio became Pope Francis in 2013, seven months after the Cardinal died. In a new book written by Bishop Ivo Fürer, another key member (and host) of the St. Gallen “mafia,” confirms that Cardinal Martini's 2012 book summarizes much of what was discussed over the years by the group.

A side-by-side comparison with Martini’s blueprint and Pope Francis’ own words reveals a striking similarity (see below).

For instance, Martini wrote about sexual sins that “In the past the Church probably said too much about the sixth commandment. Sometimes silence would have been better.” Pope Francis in his early pontificate stated: “We cannot insist only on issues related to abortion, gay marriage and the use of contraceptive methods.”

For another example, Martini wrote about the destruction of souls who would otherwise go to hell: “I hope that sooner or later God redeems everyone. [….] I can't imagine how Hitler or a murderer who has abused children can be with God. It's easier for me to think that such people are simply extinguished. [….] But perhaps in the other world God has new possibilities. [….] Yes, there is hell, but nobody knows if anyone is there.” Pope Francis said about this: “They are not punished, […] those who do not repent and cannot therefore be forgiven disappear. Hell does not exist; the disappearance of sinful souls exists” (this quote has never been denied by Pope Francis.)

In another example, Martini wrote on not judging homosexuals: “Among people I know there are homosexual couples, people who are highly regarded and public-minded. I have never been asked, and it would never occur to me, to judge them.” Pope Francis said about this: “If someone is gay and is searching for the Lord and has good will, then who am I to judge him?”

In a 2015 interview, Argentinean Archbishop Victor Fernández, one of Pope Francis’ top advisers, stated that the pope plans to change the Church in ways that cannot be undone by future popes.

“The pope goes slow because he wants to be sure that the changes have a deep impact. The slow pace is necessary to ensure the effectiveness of the changes. He knows there are those hoping that the next pope will turn everything back around. If you go slowly it's more difficult to turn things back… . You have to realize that he is aiming at reform that is irreversible,” he said.

Bishop Fürer – who was bishop of Sankt Gallen, Switzerland from 1995 until 2005 – was, together with Martini, the organizer of the St. Gallen “mafia.” The group of “progressive” cardinals included Cardinals Achille Silvestrini, Basil Hume, Walter Kasper, Karl Lehmann, Godfried Danneels, Cormac Murphy-O'Connor, and Audrys Juozas Bačkis – who were collectively discontented with the pontificate of Pope John Paul II and then, after his death, they unsuccessfully tried to get Jorge Bergoglio elected at the 2005 Conclave.

Significantly, the group met in Sankt Gallen on a yearly basis exactly during the time when Bishop Fürer was the bishop of Sankt Gallen, thus being able to host their annual meetings. The group was officially disbanded in 2006 when Fürer retired.

Bishop Fürer, in 2018, published his own memoirs, Church in Changing Times (Kirche im Wandel der Zeit published by Theologischer Verlag Zürich), and in this book, he describes how he, together with Cardinal Martini, had engaged in an intense battle with Pope John Paul II about the question of which direction the Catholic Church in Europe should be taking. John Paul II decided that battle by effectively removing Cardinal Martini from the presidency of the Council of European Bishops' Conferences (CCEE), which also had its seat in Sankt Gallen, where Fürer was the bishop. Fürer had been the CCEE's general secretary for twenty years, from 1975 until 1995. The Sankt Gallen Group effectively headed the CCEE for 24 years, from 1979 until 1993, because one of its members, Cardinal Basil Hume was its President from 1979 until 1986, and he then was replaced by Cardinal Martini who only let go of his office in 1993 upon an intervention from Pope John Paul II.  Though the CCEE had no binding nature upon the national bishops' conferences, it still had much influence, by organizing dozens of conferences, episcopal meetings, and by organizing several large ecumenical events with Protestant and Orthodox churches.

As we will see in another upcoming LifeSiteNews report, the leaders of the CCEE at the time tried to establish a parallel structure in defiance against Roman centralism, often not even asking Rome for permission for their actions.

In light of this history, not long after Martini had been practically removed from his CCEE presidency by the Pope – upon deciding that the next President of the CCEE had to be a president of a bishops' conference (which Martini was not) – Ivo Fürer and Martini started, in 1996, to host their annual meetings in Sankt Gallen. The progressive wing, after being pushed back from establishing their own structures within the Church in the CCEE, had to retire into more private realms, with much regret. They essentially continued the work that they had undertaken, for decades, in the framework of the CCEE, thus bearing much of the responsibility of the serious weakening of the Catholic Faith in Europe.

The head of the Sankt Gallen Group, Cardinal Martini played a pivotal role within the Catholic Church. It was he who told Pope Benedict XVI in 2012, according to one source, that he should retire. And not long after Pope Francis was elected, Francis praised Martini in public, calling him “prophetic,” “a father for the whole Church,” and a “man of discernment and of peace.” He also once said: “I'd like to remind you that Carlo Maria Martini also came from that [Jesuit] order, someone who is very dear to me and also to you.”

In light of these short facts – which LifeSiteNews will present in detail in an upcoming report – let us now consider what Fürer has to say about this group.

According to Fürer, he and Martini “stayed in friendly contact,” after both Martini (in 1993) and then Fürer had been removed from the CCEE. Fürer had become in 1995 the bishop of Sankt Gallen and thus could not be anymore the secretary of the CCEE.

“We came together for regular private St. Gallen meetings with friends [“St. Galler Freundschaftstreffen”] which Martini and I organized,” the Swiss bishop explained. “We invited bishops from different countries who suited us. Each time, we were between eight and ten persons and freely discussed all Church matters.”

Martini once commented on these meetings in Sankt Gallen, saying that “there is no other meeting in the Church where one can speak so freely and so personally as in St. Gallen,” Fürer added. “Much of what we discussed at these meetings,” he concludes, “Martini worked into the book Night Conversations with Cardinal Martini.”

And in this book, Martini describes what kind of man he hoped the pope to be in the 2005 conclave: “And also in the preparation for the most recent papal election [in 2005], we Cardinals discussed openly among ourselves the questions the new pope would face and to which he would have to give new answers.”

“Among them, I said, were questions dealing with sexuality and communion for those who are separated and remarried,” he said.

There can thus be seen a strong influence of the Sankt Gallen Group on this papacy.

As the German journalist Julius Müller-Meiningen reported in 2015, Cardinal Walter Kasper, one of the members of the Sankt Gallen Group, once revealed: “What Francis now tries to implement corresponds to a high degree to the thoughts that we had at the time.” And the journalist adds: “The members of the former round table [Sankt Gallen Group] have today a determining influence upon the agenda of the Catholic Church.”

Below is the list of statements from Martini that can be found, in similar words, in papal statements issued by Pope Francis.

For those who would like to find even more congruences between the statements of Pope Francis and Cardinal Martini, please see this list of excerpts taken from the above-mentioned Martini book. The articles written by Julia Meloni on this matter are very helpful and confirmatory of our work.