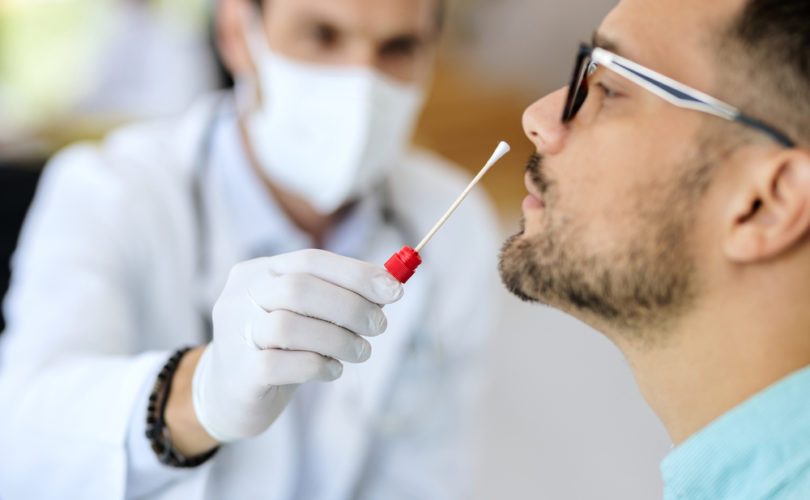 April 21, 2021 (LifeSiteNews) – While Public Health Ontario (PHO) is reporting an all-time high positivity test rate for COVID-19, prompting the most restrictive measures from the provincial government to date, evidence shows that the diagnostic testing tools for detecting the virus being employed by the province’s health authorities may not only be misleading but false.

The main method for testing for COVID-19 in Ontario is by means of the highly controversial PCR test.

“PCR testing (also known as polymerase chain reaction testing) is a type of test that tells us if someone currently has COVID-19. It uses a sample collected with a swab from the person’s nose/throat,” states PHO’s website about the method.

Explaining how the PCR test works, they wrote:

Detection of viruses using Polymerase Chain Reaction (PCR) is helpful so long as its accuracy can be understood: it offers the capacity to detect RNA in minute quantities, but whether that RNA represents infectious virus is another matter. RT-PCR uses enzymes called reverse transcriptase to change a specific piece of genetic material called RNA into a matching piece of genetic DNA. The test then amplifies this DNA exponentially; millions of copies of DNA can be made from a single viral RNA strand.

A fluorescent signal is attached to the DNA copies, and when the fluorescent signal reaches a certain threshold, the test is deemed positive. The number of cycles required before the fluorescence threshold is reached gives an estimate of how much virus is present in the sample. This measure is called the cycle threshold (Ct). The higher the cycle number, the less RNA there is in the sample; the lower the level, the greater the amount in the initial sample.

In other words, the test relies on multiple cycles of amplification to produce results. But a positive result doesn’t necessarily indicate if someone is infected with COVID-19, only if they have more or less of a viral load. The New York Times outlined how the cycle threshold relates to the accuracy of the test this way:

The PCR test amplifies genetic matter from the virus in cycles; the fewer cycles required, the greater the amount of virus, or viral load, in the sample. The greater the viral load, the more likely the patient is to be contagious.

This number of amplification cycles needed to find the virus, called the cycle threshold, is never included in the results sent to doctors and coronavirus patients, although it could tell them how infectious the patients are.

In three sets of testing data that include cycle thresholds, compiled by officials in Massachusetts, New York and Nevada, up to 90 percent of people testing positive carried barely any virus, a review by The Times found.

Heneghan and Jefferson in their article related how a Canadian study found that a “live virus,” indicating that someone was truly infected with SARS-CoV-2 and could be contagious, was “only detected when the cycle threshold was less than 24.”

When the threshold is set to a higher limit, say 37, the test may only be detecting dead genetic fragments of the virus, perhaps from a previous infection or fragments that were simply picked up from the environment that, even though they pose no risk to the individual, could be counted as a positive case of COVID-19.

— Article continues below Petition —
PETITION: No to mandatory contact tracing and government surveillance for the coronavirus in Canada
Show Petition Text
47388 have signed the petition.
Let's get to 50000!
Thank you for signing this petition!
Add your signature:
Show Petition Text

As provincial agencies prepare to "re-open" society, serious concerns have been raised about mooted government plans to track people - using smartphones and other technologies - who have been infected with the coronavirus.

Therrien made this statement in a government press release, but has yet to elaborate.

And, as of now, Alberta and New Brunswick have both launched their own voluntary contact tracing apps.

So, we need to continue to raise our voices to ensure that these measures stay voluntary.

In other countries, like the U.S., Congress is considering measures which would give the federal government $100 BILLION for "diagnostic testing for COVID–19, to trace and monitor the contacts of infected individuals, and to support the quarantine of such contacts..."

And, most chillingly, the bill would also provide for "services" related to the "quarantine [of people] at their residences."

Could this kind of measure be on its way to Canada?

Please sign this urgent petition which urges all Canadian premiers, as well as Prime Minister Trudeau, and all government agencies to reject mandatory government contact tracing and surveillance for the coronavirus, especially using smartphone contact tracing.

We simply must resist imposing Big Brother on ourselves for "safety's sake."

Basically, your phone could be equipped to spy on you for the government.

And, that's exactly what we could be facing if we don't demand that government prohibits mandatory contact tracing and surveillance.

There are massive concerns with privacy, security and efficacy.

Here is a list of the biggest threats to freedom:

Please sign this petition which calls on every provincial premier, the PM, and government agencies to reject mandatory surveillance, especially using smartphone contact tracing and other new technologies.

The threat to personal freedom and to privacy is not to be minimized.

Using targeted cell phone texts, they have gone so far as to blast out particular personal information about individuals who have tested positive for a contagious disease.

Anyone can see that such a system could be open to abuse...

Today, authorities focus on health concerns, but who says that they won't focus on political considerations in the future?

And, there are other serious concerns about smartphone surveillance, chief among them being: will this technology work at all?

Experts, like Dr. Farzad Mostashari, the former national coordinator for health information technology at the U.S. Department of Health and Human Services, who was interviewed by The Verge, suggest that false positives will be a major problem.

So, for all of these reasons, we encourage you to sign and share this urgent and important petition, today.

It will be sent to all premiers and urge them to soundly reject mandatory surveillance, especially using smartphone contact tracing and other new technologies.

'Why Bluetooth apps are bad at discovering new cases of COVID-19' - https://www.theverge.com/interface/2020/4/10/21215267/covid-19-contact-tracing-apps-bluetooth-coronavirus-flaws-public-health

Juliet Morrison, a virologist at the University of California, told The New York Times last August that any PCR test with a cycle threshold above 35 would be too sensitive, potentially resulting in false positives.

Public Health Ontario admits on its website where it explains “Covid-19 PCR testing and Cycle Thresholds” that it runs the PCR test with a cycle threshold of up to 40, far beyond the number 24 at which live virus can be found and far beyond the number 35 that could yield reliable results.

And this is where things get even crazier. The PHO states that if what it believes to be virus fragments are detected between 38 and 40 cycles, it still reports this as a positive case.

“The cutoff point for a positive result for PHO’s developed lab test is 38 cycles. This means that if the virus is found at or before 38 cycles are completed, then the test is considered positive. The cutoff point for a negative result is 40 cycles. If the virus is detected between 38 and 40 cycles, we call this an indeterminate or inconclusive result. All inconclusive results are considered probable (likely) cases for public health reporting,” states the PHO on its website.

PHO’s Clinical Microbiologist and Deputy Chief Microbiology Samir Patel went as far as boasting that the PHO is willing to accept test results as COVID positive even when the test is run at the highest cycle threshold.

“Most samples that test positive at PHO are found after a low number of cycles are run. However, any indication of the virus in a sample is important, regardless of how many cycles it took to find,” he said as reported by PHO’s website.

Public Health Ontario admits that the cycle threshold at which tests were run are not included on test results in Ontario though they are available to health care professionals upon request.

What all this means is that when Ontario health officials claim that tests are showing a rapid rise in COVID cases and measures need to be taken to stop the spread, the reality is likely far different, namely that only a small percentage of those cases may involve people who actually are carrying the live virus and are truly infected and capable of infecting others.

The New York Times, when it drilled down on PCR testing data in August, found that “of testing data that include cycle thresholds, compiled by officials in Massachusetts, New York and Nevada, up to 90 percent of people testing positive carried barely any virus.”

Applying their findings back then to the national situation, when, at the time, the United States had just recorded 45,604 new coronavirus cases, The Times stated that “if the rates of contagiousness in Massachusetts and New York were to apply nationwide, then perhaps only 4,500 of those people may actually need to isolate and submit to contact tracing.”

Applying such numbers to the Ontario situation, of the roughly 4,000 new daily cases, only 40 of them might actually contain live virus and pose some threat.

This week, a group of nine prominent Ontario doctors and scientists in the fields of clinical medicine, biology, immunology, virology, epidemiology, and infectious disease challenged the Ontario government’s pandemic response team to a public debate to defend its response to the outbreak.

On the seven topics the doctors and scientists want to discuss, one includes discussing what controls the province has put in place, if any, to “limit the number of cycles used in performing PCR tests to 30 cycles to avoid undue false positives inflating the cases reported.”

The challenge is highly critical of Premier Doug Ford’s actions.

“For over a year the government of Ontario has used a blanket non-targeted and population-wide approach using measures that now appear to be, at best, arbitrary and worse capricious. These have led to unnecessary death of our seniors and collateral damage to our society’s mental health, deaths of despair, drug overdoses (intentional or not), alcoholism, suicidal ideation and worse.”

“Ontarians with severe illnesses, small businesses, and our economy have suffered immeasurable harms,” they state.

In December, Florida required that laboratories reporting on PCR test results must include cycle threshold values. This would allow health authorities to determine what tests they especially need to pay attention to (ones with a lower cycle threshold that showed evidence of live virus) for a more reliable perspective on the real situation.

It’s time for Ontario government leaders to follow the real science and base decisions on the actual number of infections, not on unreliable test results that may inflate the situation and make it seem much worse than it really is.