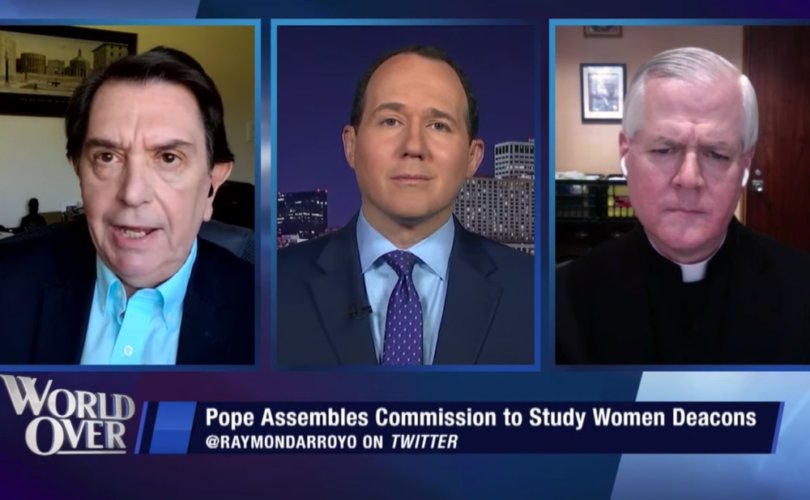 April 17, 2020 (LifeSiteNews) – On April 8, Pope Francis announced that he established yet another commission for the study of the female diaconate. The responses to this new initiative are coming in, with “progressive” Catholics along with traditionally-minded Catholics both being critical of it.

For the progressivists, the members of the commission – some of whom are expressly against a female diaconate – do not show clear enough signs that the Pope wishes to establish such a new diaconate. They are impatiently awaiting concrete steps on the part of the Pope.

For traditionally-minded Catholics, this new commission is dealing with a question that they see as already solved.

For example, Father Gerald Murray, speaking with EWTN’s Raymond Arroyo on the April 16 Papal Posse, states explicitly that “this commission should not be formed” because “it casts doubt on whether it is true that women can't be made deacons.”

Murray is not sure what this new commission will bring forth, and he adds that, looking at the members of the commission and at the reactions of progressivist Catholics to it (see here an example), it is “not a strong pro-deaconesses committee.”

Murray wonders whether the Pope is here merely “temporizing” and responding politely to the Amazon Synod's request for a further investigation of the topic of female deacons. His colleague at the Papal Posse, Dr. Robert Royal, adds that the Pope's intention behind establishing a new female deacon commission is “ambiguous.” He hopes that the female diaconate “is going to be dismissed as an impossibility for the Church.”

The previous 2016 commission does not give a clear answer that the Church ever had female deacons similar to the male deacons, according to the Pope. He told the media in May of 2019 that “the formulae of ordination for the [female] diaconate found until now are not the same as for the male diaconate and are more similar to what today would be the abbatial blessing of an abbess.”

However, Pope Francis never published the official findings of that 2016 commission.

The Catholic priest and theologian himself is a clear opponent of the female diaconate. As he told LifeSite in January of 2019, historical records show that the “ancient Church was unacquainted with a female diaconate equivalent to the male diaconate.” “The history of the institution of deaconesses offers no solid basis, therefore, for the introduction of a sacramental female diaconate,” he added.

Speaking with the Tagespost's Rome Correspondent Guido Horst, Hauke thinks that there are several options of what this new female deacon commission could bring about. First, it could prepare a final official statement that an ordained female diaconate is not possible. Second, it could arrive at a decision about introducing a “non-sacramental female diaconate.” Third, the commission could propose a sort of official blessing for women who are already working in pastoral care.

Hauke does not believe that the new commission could propose an ordained female diaconate, because Pope John Paul II's 1994 document Ordinatio sacerdotalis had “excluded” a “sacramental ordination of women,” since the diaconate is part of the three-fold Sacrament of Holy Orders. And this applies, Hauke adds, even though the female diaconate was “not directly” mentioned in the document.

It is “part of the Church's tradition,” the German professor who lives and teaches in Lugano, Switzerland states, that the “diaconate is part of the Sacrament of Holy Orders, which is based on the mission of the Apostles.”

Professor Hauke also points out in his comments to the Tagespost that he himself, together with Professor Helmut Holping, had published a book on the diaconate in 2018 (in Italian) and in 2019 (in German and Portuguese) that was personally handed to Pope Francis, on December 18, 2019. He believes that this new book – to which also another member of the new female deacon commission, Professor Santiago de Cura Elena, also contributed an essay – “might have played a role” in convincing the Pope that this door to the sacramental female diaconate was closed.

Hauke himself, together with two of his colleagues, were able to present the book to the Pope and comment on it in conversation with him, as he told Guido Horst.

It is to be hoped that the fact that Pope Francis chose two of the authors of this new book as members of the new female deacon commission is a sign that he was convinced by their arguments and historical evidence.

As to the other possibility – namely, that there would be a proposal for a non-sacramental ordained female diaconate – we may remind our readers that this actually is a sort of a new “Kasper proposal.”

In July of 2019, Cardinal Walter Kasper told LifeSite that he is not in favor of further discussing the possibility of a sacramental female diaconate since there is not much historical evidence for it.

His idea was essentially about introducing a female ministry without ordination, but with a formal blessing ceremony by the Church. Such women, according to this idea, would be able to wear a special garment, give out Holy Communion, hold a Liturgy of the Word, administer certain sacraments, and even rule over parishes, including their priests.

“The Church is free to carry out the vocation of women to these offices with the help of a non-sacramental, liturgical blessing; and in the presence of the whole congregation and within the celebration of the Holy Eucharist (for example in the context of the Prayers of the Faithful),” Cardinal Kasper stated.

Kasper has been an influential prelate under Pope Francis and has helped to formulate Pope Francis' proposal that some “remarried' divorcees, under certain conditions, might be admitted to the sacraments without changing their sinful way of life.

The idea of a non-sacramental female ministry can also be found in Pope Francis' post-synodal exhortation Querida Amazonia, his response to the Amazon Synod's final document.

Only time will tell us what this new female deacon commission will bring about.