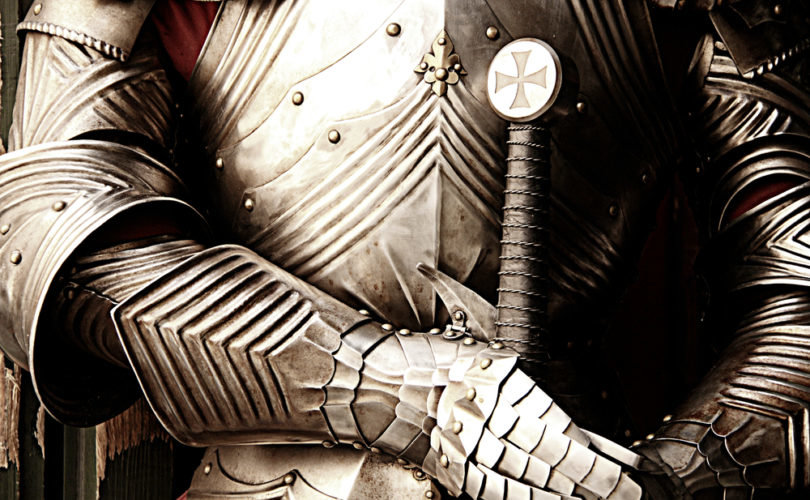 It won't do to wring your hands and say, “But these images of warfare make me jittery.” The Church has not chosen war. War has chosen the Church.

Read Part I: The times are dire. So where are the priests we desperately need to lead us?

Those priests must come from the ranks of boys and young men.

Therefore the Church must be especially careful to foster the spiritual lives of boys and young men, attracting them to her, holding forth to them those prospects that are known to appeal to that part of the population: strenuous exercise, rebellion against the foolishness of the world, manly courage, intellectual power, participation in authority by means of soldierly obedience, and ultimate seriousness of purpose, readiness to lay down one's life.

It won't do to wring your hands and say, “But these images of warfare make me jittery.” The Church has not chosen war. War has chosen the Church; she has her diabolical enemies whether she likes it or not. They will not go away if she shuts her eyes and play-acts at spirituality. That is what she has been doing for several decades, and they have not gone away. They romp in the streets and laugh. You are not going to drive them into a herd of swine by means of gentle ambiguous appeals to courtesy and discretion, while having tea and scones with their lieutenants in government, education, entertainment, and the press.

Now I suggest that we actually do know the kinds of things that attract the broad-shouldered baritones, to use Father Paul Mankowski's happy phrase, that once thronged the parishes in the United States and Europe. And we know the kinds of things that turn them away, or cause their attention to fix upon more obviously manly enterprises. Why don't we do the one, and refrain from the other?

I am speaking here from the vantage of human nature merely, but that does not invalidate the point. Jesus commands us to pray that the Lord of the harvest will send forth laborers. He did not say that we should sit on our hands while we do so, not bothering to think or to act, expecting instead to wake up in the morning to find seminarians scattered like hoarfrost upon the ground. It is true that the Holy Spirit will call young men to the priesthood, but He expects us also to raise young men fit and ready to be so called. He desires our work too.

If we have that knowledge I have mentioned above, the obvious question is, why don't we put it to use? As I see it, only two answers are possible:

We do not want to acknowledge the truth. This stubbornness comes in various forms. The first is a kind of wishful thinking. We very much want to believe that human nature is so malleable, it may very well happen that in some undefined future boys will actually like sashaying down the aisle like the femme fatale from Carmen; as if it could ever happen in a thousand years that you might drive past a schoolyard when the children are acting most unconsciously according to nature, and find all of the girls playing football while the boys are sharing secrets out of their diaries.

The second form is more personal. We want this to be so, though we know it will not be so, because we have too much invested, in the rest of our lives, in denying sexual realities. We want to believe that father and mother are interchangeable; that a woman who spends seven hours a day scraping the plaque from the teeth of strangers is admirable because she earns a wage, while a woman who spends the same time doing a dozen useful things for the people she loves is contemptible, a stick-in-the-mud stay-at-home. An advantage-taking husband would like to clap himself on the back for “accepting it,” when he might spare his wife and help his children by working a little harder and earning more money. That's assuming that the family isn't worse off anyway, once all the expenses are taken into account.

The third form is political. A prior commitment to an idol, “equality,” forbids us to take reality into consideration. Such an ideologue may know that Mass as it is celebrated will never attract men to the fold, but that is all right, since the idol takes precedence over the Lord. If the ideologue were in an apartment on the twentieth story of a burning building, he might forget his ideology in the heat of the moment, and, when he regained consciousness, be grateful that the fireman who came to haul him out of there on his back was a fireman indeed. But a fire is a fire, while church is only church. A body can be burnt to a crisp, but Hell is empty, and if it isn't, it cannot be much worse than Mississippi in the summer. The great god Smiley would never have it so.

The second answer to that question above is more troubling. We do not actually want there to be more priests. It isn't only the layman who can lose his faith. Priests and bishops lose their faith too. But they are attached to their way of life, and the conflict between what they are supposed to profess and what they want to profess can finally prove unbearable. They may “resolve” the conflict by establishing an essentially different faith, one that they dream will be revealed in the conveniently vague future. Then, to the extent that the Church is a drag on the realization of that new faith, she must be fought, even destroyed; “transformed,” in the common parlance.

Such men are in a parlous spiritual state, and need our prayer most desperately. But while they are in positions of authority, whereof they are as jealous as the landed gentry of old, they will do all they can to ensure that only the right men enter the priesthood: meaning, the men who will be their creatures, and who will never give them an example of faith and fervent works to put them to shame. These prelates and priests do not have to be persuaded that they are failures. They know it to their constant pain. But there are laymen who share this state. Many of them set themselves up as functionaries in their parishes, working to undermine the liturgy, the school, the priest, and the faith. They too are animated by a lust for destruction: libido delendi. They would prefer to “lead” a dying church than to resume their status as buck privates in a church on the move, to batter down the gates of Hell. “Better to reign in Hell than serve in Heaven,” says Satan.

Do we want priests? If the answer is yes, and we are willing to live with Reality, then we know where we will have to look for those priests.