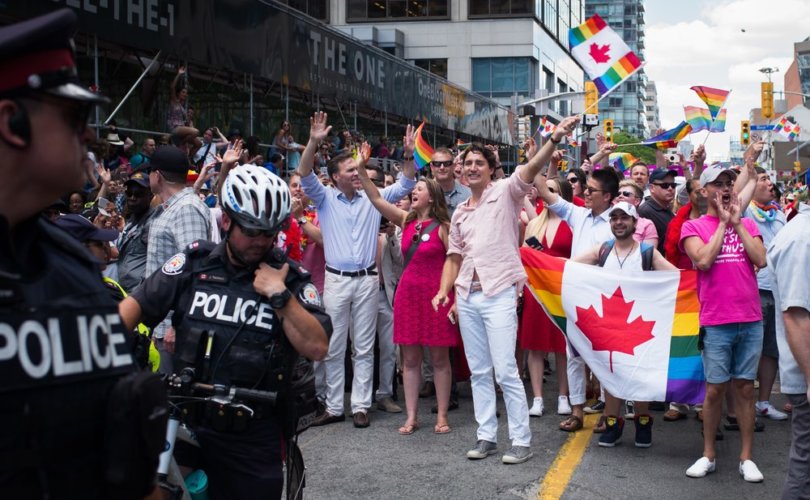 December 18, 2019 (LifeSiteNews) – Very few people noticed or commented on it, but back in September, the Liberal Party of Canada promised that if Canadian voters re-elected a Liberal government, they would seek to amend the Criminal Code to ban so-called “conversion therapy,” with the NDP’s Jagmeet Singh hastening to say that his party has been “talking about this for years.” Dr. Kristopher Wells, an LGBT activist who has, among other things, shared a cartoon comparing Christians to Nazis, posted sexually explicit content on social media, and relentlessly promoted curriculum and materials that promote a wide range of sexual acts and experimentation for minors, greeted the news as long overdue. Justin Trudeau’s mandate letter to Justice Minister David Lametti duly requested that the minister make it happen.

Many social conservatives are loath to comment on so-called “conversion therapy” bans due to the fact that propagandists and activists such as Wells insinuate that these bans are necessary to ensure that homosexual and gender-confused youth are not subject to electroshock therapy or other cruelties. The reality is far different. Andre Schutten of the Association for Reformed Political Action (ARPA) and his team have been doing much-necessary work explaining and exposing what these bans would mean for Christians in Canada (their policy report is very thorough). Schutten explained in an interview why we should be so concerned by the latest Liberal move.

What are the “conversion therapy bans” recently put forward in the Canadian Senate and in the city of Edmonton?

The City of Edmonton passed a bylaw that threatens a “minimum” fine of $10,000 a day for any business that practices conversion therapy. The problem in the bylaw is how broadly they define “business” and “conversion therapy.” The definition of business could be interpreted (by an overly zealous bylaw officer) as including churches, and the definition of 'conversion therapy' is so broadly defined, it could include spiritual prayer (in fact, this was specifically proposed in a document published by Kris Wells). This is an incredible encroachment on religious freedom! More than that, it will have a chilling effect on all social workers, counsellors, pastors, doctors, and teachers who might want to explore the question “why” when a child presents with gender dysphoria. You see, the ones who pay the price with a law like this are kids struggling with who they are.

It's also important to note that both the Edmonton bylaw (and others like it) and the Senate bill (which we expect will become a government bill soon, since the Mandate Letter for the Justice Minister includes creating a criminal ban on conversion therapy), exclude from their bans the most invasive, irreversible[,] and extreme forms of conversion therapy known to man: chemical and surgical body modifications known as “gender reassignment surgery.” These are truly mutilating procedures, have devastating effects on humans, have virtually no testing whatsoever, and yet are explicitly exempt from the conversion therapy bans. It is absolutely outrageous and, again, it's the struggling kids who pay the price of this rapidly religious ideology.

What are the implications of these bans for Christians?

With the bylaws being passed, coupled with a proposed Criminal Code change, we should expect that faithful churches will be fighting for their charitable status very soon. Think about it: if a charity is doing criminal acts or routinely violating municipal bylaws, would anyone argue they should continue to have charitable status? Faithful churches will want to counsel children and adults to live their life as God would have them live it, in conformity to His Word. This has implications for lifestyle, for identity. This is not forced, it does not involve bizarre rituals or the infliction of pain, it merely involves prayer and spiritual encouragement. That's all. Apparently, that is too heinous to tolerate in Canada.

LGBT activists like Dr. Kris Wells appear to believe that these bans don't go far enough. What might their next move be?

Charitable status I think is next on the table. Then, perhaps, labelling Christian groups as hate groups. Quite probably attempting to shut down church-run schools (where the church or the school is reported to do “spiritual prayer”). Also, the aggressive push to stop stable Christian families from being able to help children in need in the foster system. This is already happening, but might become more aggressive. Once again, it's the kids who suffer. Better a child not be adopted or placed in a stable home, than that the home have Christians in it!

Can anything be done to push back in the absence of a judiciary that relies on precedent?

Christians–all Christians–need to speak out about this, and anyone (Christian or not) who thinks this is going too far should also speak out. I keep hearing Christians and others say, “Oh, they've really gone too far with this transgender thing. There will be a correction soon.” Stop saying that! You don't understand how mass indoctrination works. Read the Gulag Archipelago and you can see how powerful groupthink can be. In our country, the vast majority (over 90%) of children are taught in state-run schools and this ideology is already well entrenched there. We have less than a decade to correct before an entire generation–taught from age 3 to 23 that there is no such thing as “boys” and “girls” and that your biology does not matter–get to be the decision makers and policy makers in our country.

Jonathon’s new podcast, The Van Maren Show, is dedicated to telling the stories of the pro-life and pro-family movement. In his latest episode, he speaks National Review editor Rich Lowry about his latest book, The Case for Nationalism: How It Made Us Powerful, United, and Free. Lowry has authored other books, including a New York Times bestseller, Lincoln Unbound and Legacy: Paying the Price for the Clinton Years. Van Maren and Lowry speak about Lowry’s book, where America is headed, “the age of Trump,” the rise of division in our political climate, and the need for maintaining culture in order to maintain a democracy.