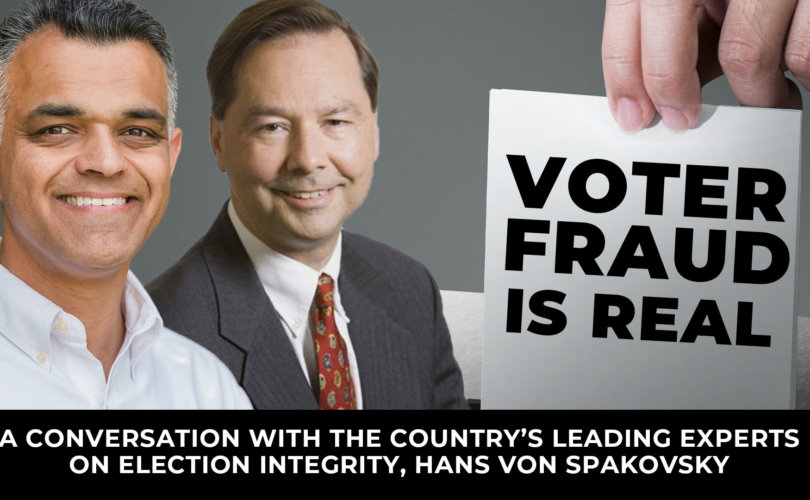 November 11, 2020 (LifeSiteNews) — With the election thrown into overtime by growing evidence of widespread voter fraud, President Trump has refused to concede to Joe Biden, contesting the election by issuing lawsuits in several states.

In the midst of this ongoing fight to ensure a fair election count, I spoke with one of the country’s leading experts on election integrity, Hans von Spakovsky.

Spakovsky is a senior legal fellow with the Heritage Foundation’s Edwin Meese III Center for Legal and Judicial Studies. He’s also the manager of the their Election Law Reform Initiative, where he studies and writes about campaign finance restrictions, voter fraud and voter ID, enforcement of federal voting rights laws, administration of elections, and voting equipment standards.

He’s already written multiple books on the subject. He’s the co-author with John Fund of “Who’s Counting?: How Fraudsters and Bureaucrats Put Your Vote at Risk” as well as “Obama’s Enforcer: Eric Holder’s Justice Department.” President Trump appointed him to the presidential advisory commission on election integrity in 2017.

Spakovsky explained to me his take on the fraud allegations taking place this year.

“The reality is that we do unfortunately have election fraud occur in this country, and we also have mistakes and other problems occur in our system,” he said.

He also made the important observation that Joe Biden is not officially the president “until and unless all of the states have certified their election results, and that may not happen for a while,” since many of the states may have to be subject to a recount of the votes.

He noted that the results only become official when the electoral college meets on December 14th, “where the electors of each state…will actually cast their votes for president.”

Spakovsky gave me specific instances of election fraud, not only during this election, but also during previous elections. He also discussed in depth vote harvesting, which has become a new term to understand during this year’s unprecedented election.

I agree with him when he says that we should be relentless in fighting against voter fraud. The American people need to be confident in participating in an election process free from dishonesty.  As he told me during our interview today: “preserving the democratic republic we are requires just that: fair and free elections.” Amen to that.