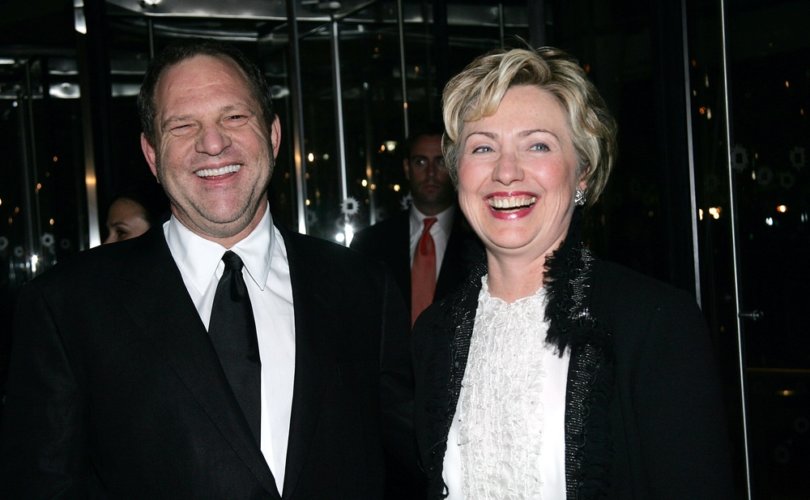 December 23, 2019 (LifeSiteNews) – Ronan Farrow’s explosive account of the reporting that took down Hollywood mogul Harvey Weinstein reads like a John Grisham novel that is, at times, almost unbelievable. Catch and Kill: Lies, Spies, and a Conspiracy to Protect Predators details how Farrow tracked down the “white whale of journalism” and painstakingly secured the sources to expose Weinstein as a serial rapist and sexual abuser, only to find himself stymied at every turn by NBC News, who eventually killed the story. It was a media coverup of the highest order that eventually sent Farrow—and the story–over to the New Yorker, where it was finally published.

The general details of the Weinstein story are now well-known and so I won’t recount them here, but Farrow’s takedown of the media’s complicity in covering up for brutal male super-predators isn’t so much reporting as it is a demolition. He cites the names of NBC executives who helped kill the Weinstein story, and then reveals that many of them had notable workplace affairs or histories of sexual harassment. He exposes the interlocking layers of culpability that enabled an extensive coverup, including blackmail, hired spies, and the leveraging of power of every sort.

What I found particularly shocking is the fact that Farrow was willing to go after every player in the coverup—even Hillary Clinton. While he does not make any direct accusations, the obviously intentional implications of his reporting are devastating to Clinton, harking back to the days when she took it upon herself to control her husband’s “bimbo eruptions” by allegedly bullying accusers. Several women, including Juanita Broaddrick (who I interviewed on this subject some time ago and has accused Bill Clinton of raping her), have consistently stated that Hillary tried to intimidate them into silence.

At one point, while detailing the massive machine employed by predators to silence accusers, Farrow refers to a PR firm used by both Weinstein and the Clintons. Farrow had previously worked for Clinton’s State Department, and noted that as he was working the Weinstein story and receiving constant pushback from the executives at NBC, he was simultaneously working on a book on American diplomacy, which would eventually include interviews with every living secretary of state. Initially, he writes, Clinton had warmly agreed to an interview.

But then, Farrow recounted, he received a call from “Clinton’s flack, Nick Merrill.” They chatted briefly about his diplomacy book, and then Merrill turned the conversation to Farrow’s not-yet-public investigation into Weinstein’s long career of alleged serial rape and sexual abuse. “By the way,” he told Farrow vaguely, “we know about the big story you’re on.” Somebody, it seems, had tipped the Clinton team off.

Farrow replied that he was working on any number of stories, but Merrill pressed him further. “Well, you know,” he said ominously, “it’s a concern for us.” Weinstein had been part of the brain trust around Clinton during the 2016 campaign and had raised hundreds of thousands of dollars for her. Merrill then went on to cancel Farrow’s scheduled interview with Clinton, claiming she was busy with her book tour. While Clinton became “one of the most easily available interviews in all of politics,” her people blew Farrow off, over and over again.

Later, Farrow writes skeptically, “Merrill would swear up and down that Clinton’s sudden reticence was coincidental. Whatever the motivation, it felt ominous—another screw turning, another sign of my life outside the story shrinking.”

Initially, when the New York Times story and Farrow’s expose in the New Yorker were released, Clinton declined to comment. Others began to come forward to claim that she’d been warned. Tina Brown, “who had edited Talk magazine for Weinstein, began telling the press that she’d warned Clinton team members about Weinstein’s reputation during the 2008 campaign” already. Additionally, Lena Dunham came out to say that during the 2016 campaign, “she’d told Clinton’s staff that the campaign’s reliance on Weinstein as a fundraiser and event organizer was a liability.”

In fact, Dunham had told one of several Clinton communications staffers that “I just want to let you know that Harvey’s a rapist and this is going to come out at some point.” Despite all this, Clinton dragged her feet in the wake of the damning stories even as other politicians scrambled to disassociate themselves, and finally announced five days later that she was “shocked and appalled” by the allegations she’d reportedly been warned about years before.

Farrow subsequently let Nick Merrill know that Clinton was the only one who had not gone on the record for his book on American diplomacy after they’d cancelled the interview during the conversation in which Merrill had expressed the Clintonian concerns about his ongoing investigation into Weinstein. Hastily, Farrow notes sardonically, the interview was rescheduled.

Unsurprisingly, Farrow’s revelations of Clinton’s bit part in this saga have gone virtually unmentioned. In countless interviews on the late-night circuit and elsewhere, nobody seemed interested in asking about the fact that a Clinton representative had warned Farrow that his investigation in Weinstein was a concern, or that his scheduled interview with her had been abruptly cancelled during the same conversation. Clinton has remained firmly in the spotlight, reportedly gauging whether or not she should jump into the 2020 presidential race, even submitting to an hours-long interview with an uncharacteristically fawning Howard Stern. Her several appearances in one of the most widely discussed books of the year, of course, were not broached.

Is it true that Hillary Clinton has, for years, systematically covered up for sexual predators like her husband? His alleged victims certainly say so. Are the assertions that her team was warned that Weinstein was a sexual predator and even a rapist over a decade ago true? Reliable witnesses say they are. As long as Hillary Clinton chooses to remain in the public eye, these are questions that deserve honest answers, and Farrow’s brutal book raises even more.