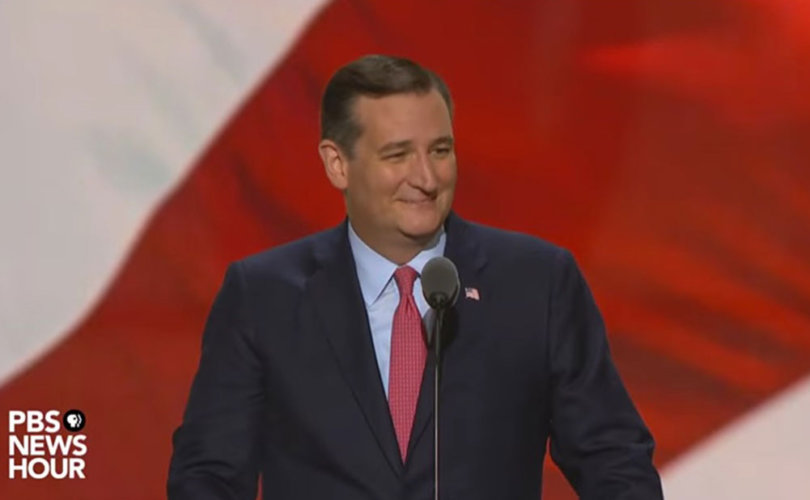 July 22, 2016 (LifeSiteNews) – I didn’t watch the Ted Cruz speech yesterday, but was able to later review a lot of the reaction. What I was reading, and seeing in video replays, was puzzling and disturbing.

Sarah Palin was seen telling Cruz to “delete [his] career.” Another said Cruz “committed political suicide.” And it went on and on like this. He was being portrayed as a traitor, a fraud, a “little man with a big ego”.

I have never before seen such intense dislike and anger towards a leading Republican candidate who is such a consistent, genuine conservative. Some of it was clear hatred.

And then there were many comments under our reports and on Facebook that were hostile and demeaning. One person stated, “Cruz displayed his sociopathic narcissism.”

Another stated, “Cruz is a crazy theocrat, a stunningly authoritarian ideologue who would love to drop nukes on the middle east and would make just as terrible a president as Clinton or Trump, and his facade of respecting the constitution would be laughable if it wasn’t so depressing.”

Another mentioned “Ted's superior and condescending demeanor” and how he was “boorish and insulting” for “scolding the delegates and viewers to “vote with their consciences”.

He was called a “sore loser”, mentioned for his “stupidity,” “gross pettiness” and being “brainless”.

What had the man done, I thought, to deserve the loud boos and what appeared at times to be an almost lynch mob type of response to his talk? He must have said some really nasty stuff, I thought.

So, I found the text of the talk and read it. I also urge you to do the same.

As far as I could tell, it was wonderful, inspiring. I honestly could not find anything in it that was objectionable.

Cruz congratulated Trump, strongly criticized Hillary Clinton and Obama and especially emphasized traditional Republican principles in his eloquent comments. He did not specifically endorse Trump, but I thought, “so what,” because if Trump followed through on the expected Republican principles that Cruz mentioned, it would definitely be a Trump endorsement.

One reader commented under our report on the speech, “Cruz walked in and provided a moral compass for Trump, one that is sorely lacking. He needs to follow it if he wants to win and beat the despicable HRC”. And I thought, yes, that seems reasonable. He provided a positive challenge to Trump and the party. Fair ball.

The prominent conservative blogger, Matt Walsh, had a similar reaction on The Blaze.

He stated, “I’ve been re-reading the transcript of Ted Cruz’s convention speech on Wednesday night and I can’t quite find the controversial part of it.”

Walsh explained, “Critics of Cruz insist that his speech wasn’t unifying. Clearly they’re correct in that assessment, and that’s precisely the problem. Cruz spoke exclusively about the principles of conservatism. He offered the Republican Party a chance to unite again around those principles.”

And then because of what Walsh also saw in the responses to Cruz’s speech, he stated, “It was made clear, once and for all, that many Republicans are not interested in uniting around principle. They aren’t interested in the principles at all. The only principle in the new party is Donald Trump. The only positions that should be taken are the ones Donald Trump takes.”

He wrote, “I thought what we were looking for was someone willing to put truth ahead of career expediency and the next election cycle. Moreover, I'm hearing people rant on about how Cruz is being selfish and self-promoting – and also for being a fool who has committed political suicide.  Well, which is it?”

As for Ted not following through on his initial pledge to endorse whoever the final candidate might be, Wright pointedly noted, “Didn't Trump threaten not only to break the pledge, but even to run third party multiple times and didn't his legions adore him for it?”

In the end, the still ongoing, acrimonious responses to Ted Cruz’s speech are worrisome and in many ways hypocritical of a lot of the more severe critics. If this is what a Trump nomination win does to the Republican Party, I can only imagine what it will do to the nation should Trump win the election. It is going to get really ugly.

However, we all know for certain that a Clinton presidency would be our worst immediate nightmare. The charges that Ted Cruz was indirectly leading Americans to vote for Hillary Clinton instead of Donald Trump, was the nastiest and most ridiculous charge.

In his speech Cruz stated the following,

Of course, Obama and CLINTON will tell you that they also care about our children's future. And I want to believe them. But there is a profound difference in our two parties' visions for the future.

Theirs is the party that thinks ISIS is a “JV team,” that responds to the death of Americans at Benghazi by asking, “What difference does it make?” That thinks it's possible to make a deal with Iran, which celebrates as holidays “Death to America Day” and “Death to Israel Day.”

My friends, this is madness.

On education, your freedom to choose your child's education, even if you aren't as rich as Hillary CLINTON or Barack Obama.

Hillary CLINTON believes government should make virtually every choice in your life. Education, healthcare, marriage, speech – all dictated out of Washington.

People are fed up with politicians who don't listen to them, fed up with a corrupt system that benefits the elites, instead of working men and women.

Ted Cruz was clearly challenging Trump and the party to follow the surest path to defeat Clinton. I don’t see how it could be interpreted any other way, regardless of his dismay over the way Trump had treated his wife, his father and himself during the nomination campaigning.

The speech by the openly gay founder of Paypal, Peter Thiel, his comment that Trump will not wage “fake” culture wars, which distract from “our real problems,” and the standing ovation he received from the delegates, was the most worrisome part of the convention. Trump had invited Thiel to speak to the convention.

Thiel’s intervention and Trump's first ever Republican acceptance speech mention of the “LGBTQ community” indicated that a deadly shift in the Republican Party, away from its historically strong social conservative principles, was threatening under Trump.

As Maggie Gallagher has pointed out, if Donald Trump is elected president he will lock in Obama's countless gay and transgender mandates and initiatives throughout the agencies of the federal government and in the armed forces by giving them the validation of a Republican administration. He has never promised to repeal or remove a single one–even the ones unconstitutionally imposed on the states. Nor has he made concrete promises to protect religious liberty and the rights of conscience which are so dramatically under assault around the country. Establishment Republicans who have been dying to surrender on these and other social issues will be delighted. Trump will be taking the Party in precisely the direction they want it to go. Getting the stuff they don't like (and are embarrassed by in their social circles) out of the party platform next time will be a piece of cake.

It is great that Trump has made commitments on pro-life measures. However, if he advances the homosexual sexual revolution, those promises won't matter much in the end. We have been extensively reporting how the LBGTQ, etc. movement is destroying the family life and moral culture of the nation and the freedoms related to that culture. It is becoming an all-out, one-side initiated war and we are on the losing end of it.

Cruz’s speech was essential at this critical time in Republican Party history. It seems that everyone was too caught up in the high intensity, bread and circuses atmosphere of the Trump coronation to notice what was really happening.

Politics often does strange things to even the very best people. I have seen that happen very many times over the past 35 years of my involvement in pro-life activity.

The only sure protection to clear sight in the political environment is to have a strong, constantly lived spiritual life. Otherwise, the seduction of the political machines and manipulations is very hard to resist.

Ted Cruz’s refusal to endorse Trump: a betrayal or a courageous act?

Ted Cruz: ‘You have my word’ I’ll fight to save GOP’s pro-life plank