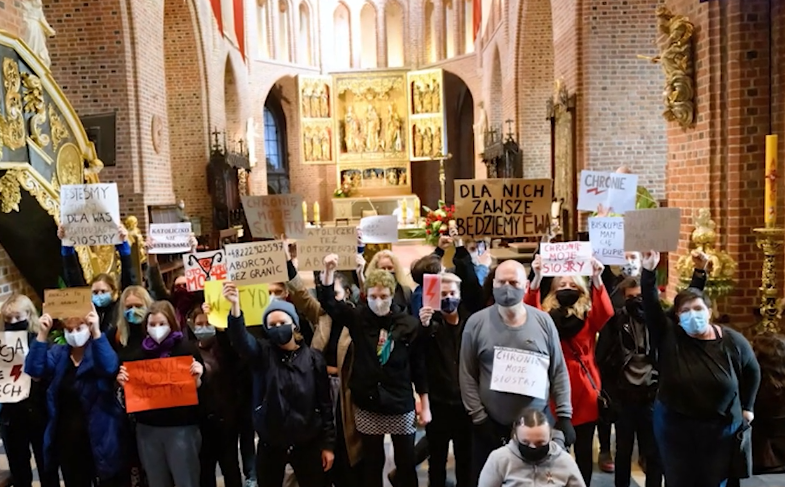 October 30, 2020 (LifeSiteNews) – Catholic Poland is in danger of losing her soul. Large groups of Polish young people who never knew Communist oppression but have been steeped since birth in a toxic brew of pop culture and cultural Marxism have taken to the streets to protest something that should be celebrated by us all: the decision of a Polish court that eugenic abortion is unconstitutional.

Furious, Poland’s once-marginal pro-abortion movement has taken to the streets, calling out to the nation’s Netflix generation like a demonic Pied Piper to demand the right to kill their disabled children — indeed, any unborn children. Unthinkable just five years ago, young Polish women are screaming obscenities on the street and declaring themselves willing to have sex with anyone and everyone and to abort any resulting child.

And instead of confining their protests to the public square, the far-left extremists and their disciples have taken their “war”— their word, not ours — to the nation’s Catholic churches and to monuments commemorating those Poles who died so that their generation could live.

In the past week, they have interrupted Masses, screaming blasphemies and obscenities, during the liturgy. They have vandalized churches and sacred monuments. Some demonstrators attacked a priest, exulting in the fact that their victim was a priest. Other demonstrators split open a young man’s head merely because he was protecting his town’s statue of St. Pope John Paul II.

We thank God that Poland's faithful Catholic men, real men, men who accept fatherhood, and who have placed their own bodies between the leftist onslaught of the churches and monuments of their ancestors. And we also assure our brothers and sisters in the Polish pro-life movement that we have not forgotten them. “NIE (Nyeh) jestecie (yest- ETCH-ye) sami (sA-mee)!” You are not alone! We are with you. We are praying for you. We thank you for what you have done for unborn children and for your traditional Catholic culture.

From the bottom of my heart, dearest brothers and sisters in Poland, you are an amazing inspiration to us here in the West. You are one of the last nations on earth holding to the truth of Christ and defending defenseless unborn children – never give up! You have led the way in the pro-life fight by fighting to protect the disabled from being killed in the wombs of their mothers. You are standing strong to defend your churches and monuments. You are our heroes. Catholics around the world see what is happening in Poland, and we commit now to praying earnestly for you while you battle the Satanic forces that are working to destroy the heart and soul of Poland.