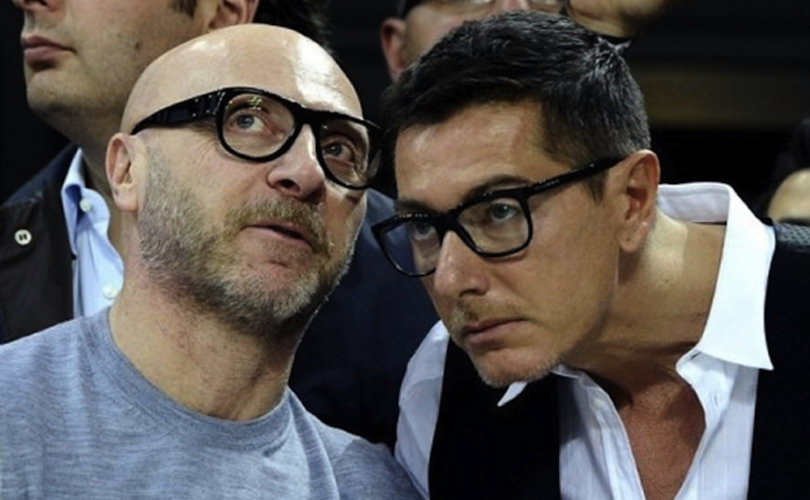 ROME, December 18, 2017 (LifeSiteNews) – Stefano Gabbana is one half of Dolce and Gabbana, the iconic Italian fashion team that has enjoyed enormous worldwide success since its founding in 1984.

Together with business partner (and former homosexual relationship partner) Domenico Dolce, Gabbana made headlines in 2015 when the duo suggested in an interview published in Italy’s Panorama magazine that children born to gay couples through intense, highly technological medical interventions are “synthetic children.”

Now Gabbana has made headlines around the world on his own.

“I don't want to be called gay, because I'm simply a man … full stop,” said the world famous fashion designer, according to AFP/France24.

“The word ‘gay’ was invented by those who need to label people, and I don't want to be identified by my sexual choices,” he continued.

Up until now he has always proudly identified as gay.

Gabbana said he previously thought he “could help spread a new culture as a famous person, a culture no longer based on gay rights but on human rights.” He added, “We are human beings before being gay, heterosexual or bisexual.”

The family is not a fad; ‘Children of Chemistry’ are ‘Synthetic Children’

In the controversial 2015 Panorama magazine that raised many gay eyebrows, the fashion house icons declared:

Their comments shocked the LGBT world, creating a maelstrom of controversy. Gay celebrities Elton John, tennis champion Martina Navratilova, singer Ricky Martin and others immediately launched a barrage of attacks on social media denouncing the duo for their comments, and called for a boycott of the Dolce & Gabbana brand.

Drawn to the beauty of natural law

Whether they use the term or not, Dolce and Gabbana are strong advocates of natural law.

Dolce, in using the phrase “synthetic children,” drew attention to the fact that “Life has a natural flow; there are things that cannot be changed.” Complementarity cannot be changed. Natural law, just like the laws of physics, can be neither changed nor suspended — at least not without dire consequences.

Dolce and Gabbana bravely stood against a future of state-enforced genderlessness, against a tidal wave of adult selfishness that overwhelms children’s rights and their best interests, and against the meddling government jigsaw that has continued to split, carve, and slice family life over the last few decades — especially for the poor, minorities, and the most vulnerable.

And now Gabbana has once again made a statement in perfect conformity with natural law — with truth easily identifiable in nature — and with common sense. There is no subspecies of gay humanity. There is just humanity.

We do a disservice to others in calling them “gay.”

Whether he might like to acknowledge it or not, Gabbana is in perfect accord with same-sex attracted Catholic author Daniel Mattson, who earlier this year published “Why I Don’t Call Myself Gay.”

Mattson, who leads a chaste life, notes in his book, “The reframing of human sexuality from behavior to identity has brought about a lot of confusion in the world, especially among young people … ”  It is the “greatest single victory of the gay movement.”

It seems that Gabbana wants to undo that confusion caused by the tactics of the gay movement, as well as the heavy burden it has placed on the shoulders of the same-sex attracted.