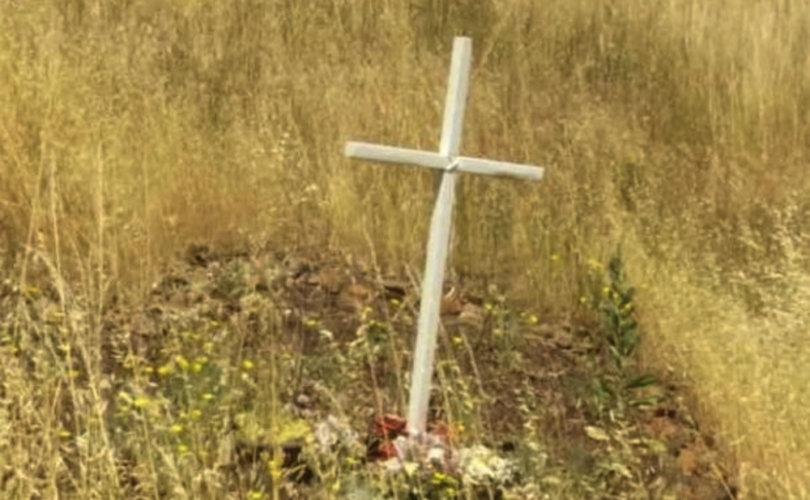 July 17, 2017 (LifeSiteNews) — As the number of Americans who identify as secular steadily climbs, we’re starting to discover that atheists can be just as fundamentalist as Christians can—and a good deal more mean-spirited. From the Christian News Network:

SALEM, Ore. — A prominent professing atheist organization is seeking the removal of roadside cross memorial in Oregon, which it states is an unconstitutional government endorsement of Christianity because it sits on public property.

The Wisconsin-based Freedom From Religion Foundation (FFRF) recently sent a letter to the mayor of Salem to advise that it had received a complaint about the cross off Kuebler Boulevard. It said at the time that it did not know the origin of the display.

“It is blatantly unconstitutional for the City of Salem to display a patently religious symbol like a Christian cross on a public roadside,” attorney Rebecca Markert wrote. “The cross … unabashedly creates the perception of government endorsement of Christianity.”

“It conveys the message to the 23 percent of Americans who are not religious that they are not ‘favored members of the political community,'” she continued. “The cross has an exclusionary effect, making non-Christian and non-believing residents of Oregon into political outsiders.”

That cross actually marked the spot where a mother had died in a tragic car accident, and had been placed there by her grieving children. They tended the area around the cross as well, surrounding it with mulch, stones, and flowers. Protests by the mayor of Salem that the memorial was simply a way for the community to commemorate the deceased mother fell on deaf ears. The head of the FFRF for the Portland area didn’t care, insisting that the cross was still unconstitutional:

“This is not the same as a very recent car accident where somebody put some flowers or whatever or even a cross on the side of the road a week or two,” [Cheryl Kolbe of FFRF] told the television station. “The cross dramatically conveys a message of governmental support for Christianity whatever the intention of the display may be.”

I’m sure that even most atheists and agnostics would agree with this asinine and cruel statement. For starters, the idea that a little cross commemorating the death of a community member on public land would be unconstitutional illustrates a mind-boggling ignorance of the Constitution, the intent of the Founding Fathers in drafting that document, the history of religious symbolism in the United States, and what the separation of church and state really means. The name “Freedom From Religious” is itself ironic — there is no constitutionally protected right to remain unexposed to the beliefs of others.

It would be interested to take this type of case — and they are increasingly frequent these days — to it’s logical conclusion. Would these atheists object to any display of religious faith, or only to Christian expressions of it? Do the trolls over at Freedom From Religion believe that the mentions of God and the Creator in America’s founding documents also violate the Constitution, and must be excised? What about the Gettysburg Address and the Second Inaugural carved into the walls of the Lincoln Memorial? Or the rich Christian symbolism that defines nearly all of Washington, D.C.’s great monuments?

To take it a step further, if the atheists at Freedom From Religion are so upset by a cross memorializing a deceased American on public land, do they also have a problem with Arlington Cemetery? What about other military cemeteries that mark the place where war heroes are buried with crosses or Stars of David? I hope such questions would perhaps prompt a bit of squirming. After all, it seems rather crass and disgusting to object to the crosses that mark the final resting places of men who died fighting for our religious freedom and right to worship as we see fit—but it’s not an incendiary point to make. If crosses on public property are unconstitutional, then the atheists might have to set their sights on some pretty large targets.

It reminds me of something John Adams once wrote, shortly after the start of the American Revolution: “Posterity! You will never know, how much it cost the present Generation, to preserve your Freedom! I hope you will make a good Use of it. If you do not, I shall repent in Heaven, that I ever took half the Pains to preserve it.”